Aircoach, Ireland’s leading private coach and bus operator, has announced its new partnership with the Football Association of Ireland to become the Official Transport Provider to Ireland’s senior men and women’s teams. 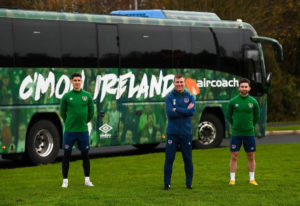 Republic of Ireland Manager, Stephen Kenny with players, Callum O’Dowda and Seanie Maguire at the announcement of Aircoach as the new transport partner of the FAI

The announcement comes as Ireland prepare to take on Bulgaria on Wednesday evening in the UEFA Nations League game at the Aviva Stadium. Aircoach unveiled their newly branded ‘Team Ireland’ state of the art coach to celebrate the partnership at the FAI’s training base in the National Sports Campus, Abbotstown.

Celebrating 21 years in business this November, Aircoach has remained at the top of its league through its commitment to innovation and investment in state of the art vehicles.

Ireland Manager Stephen Kenny was joined by Ireland internationals Callum O’Dowda and Sean Maguire at the announcement. Commenting, Stephen said: “We are delighted to partner with Aircoach as the official transport provider for our senior men and women’s teams and I would like to thank them for their support.”

Dervla McKay, Managing Director of Aircoach, said: “We are very proud and honoured to become the official transport provider to Ireland’s senior men and women’s teams and we look forward to a successful partnership. Over the past number of months, sports and football have been a huge escape for people during these difficult times and we too will be waving the Irish flag for our men and women’s teams.”

FAI Commercial and Marketing Director Mark Russell added: “Everyone has an important part to play on our journey and it’s great for the FAI to partner with a company like Aircoach who provide excellent, professional service, ensuring our teams travel in comfort. We are very proud to see the official Team Ireland coach unveiled today and we look forward to a successful relationship ahead.

“Aircoach will launch exciting offers for Ireland fans in the near future and we are delighted to be working with such a progressive company. It is always important to see new partners join us on our journey and this deal is testament to the progress we have made as an Association in recent months.”

Envoi Allen and Honeysuckle head for Fairyhouse on Sunday

Republic of Ireland U21 games rescheduled