KILDARE footballers etched another entry into the Compendium of Croke Park Catastrophes as they were buried under an avalanche of second-half Meath goals in an eerily empty Headquarters. 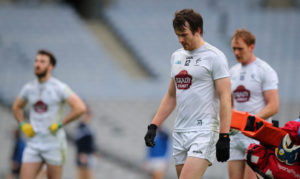 The saving grace for Kildare supporters was that they were ensconced in front of a warm fire and avoided the drive back down the N7 with their tails between their legs. Not to mention the jeers of Meath and Dublin fans.

And yet, Kildare’s first-half display was so dominant that the only concerns were how much the wind into the Davin end had helped them and whether they would pay for their missed chances.

They went in six points clear after a powerful second quarter burst that yielded six points in a row. Midfield was gobbling up any ball goalkeeper Mark Brennan was forced to kick long and at the back Kildare looked generally strong and resolute.

For the second week in a row, though, Jack O’Connor’s charges had not been clinical enough. Those ten first-half points came from nineteen attempts and they would particularly rue Kevin Flynn firing over off the woodwork for a point with the goal gaping.

A listless Meath were living off scraps in the opening period and did well to garner four points. They lost eight out of seventeen of their own kick-outs and looked a little shell- shocked heading into the break.

Whatever Andy McEntee said at half-time put a fire under the Royals and the turnaround was swift, reminiscent of the 2000 Leinster Final. Not in a good way. Within three minutes they had raided for two goals and when Cillian O’Sullivan scored a third in the 45th minute they hit the front.

Kildare continued to pick off points to stay well in contention but the fourth Meath goal from substitute Joey Wallace on 56 minutes seemed to drain any hope from the Lilywhites. By the time another sub Jason Scully plundered the fifth major six minutes into injury time, the game was well and truly up.

The turnaround had been as unforeseen as it was quick. Will we ever learn? A simple handpass from Jordan Morris 75 seconds after the restart sent the speedy Matthew Costello haring away from Paddy Brophy and he finished confidently to Mark Donnellan’s net.

Notably that had come after Celbridge wing-back Flynn had fluffed his lines with a poor handpass that could have produced a killer Kildare goal with Kirwan free inside.

After Fergal Conway replied with an immediate point, Brian Menton broke tackles far too easily and further slackness allowed Morris all the room he needed coming in from the right to rattle the net with a brilliant left-footed piledriver under Donnellan.

Again, Kildare hit back with a point from Jimmy Hyland’s free, but with still only ten second-half minutes played Meath hit the front with a third green flag as the Lilywhites slammed their fists firmly on the self-destruct button.

Flynn led a break-out from defence on the right but had no options ahead of him and was forced to turn back and pass to clubmate Brophy. From there calamity struck as Brophy’s weak handpass was intercepted by O’Sullivan. He went straight for the jugular and finished over Donnellan’s right shoulder.

Kildare stayed in the game for the next ten minutes with points from David Hyland and substitute Daniel Flynn pulling them level after 51 minutes (0-14 to 3-5) but it’s hard to resist the conclusion that old mental failings came back to haunt them. Seven previous defeats in a row in HQ do not help in that regard.

The jig was up soon after Flynn’s leveller. Conway, having a rare off-day in white, spilled one in attack and Meath’s jaunt towards the Davin end was unhindered with Thomas O’Reilly kicking a point.

Meath just had to wait patiently for Kildare errors at this stage and on 56 minutes Con Kavanagh obliged with another suicidal hand-pass across the ‘D’ that a diving Ronan Jones pushed into the path of Joey Wallace. Lionel Messi would have been pleased with the chipped finish from the ground over the Maynooth netminder.

Kildare were shell-shocked having seen a six-point lead become a four-point deficit in the space of 21 minutes. The heads dropped and the play became ragged as Meath cantered through to the end, scoring three of the next four points.

After Shea Ryan, one of Kildare’s better performers in a midfield role, saw red for a rash and high challenge on O’Sullivan in injury time, Jason Scully took a pass from Wallace as Kildare’s defence parted once more and Donnellan was unable to prevent goal number five.

It had all looked so much rosier in the first half. Kildare went three points ahead through two Jimmy Hyland frees and a Ben McCormack effort from play before Meath somewhat against the run of play drew level through Walsh, O’Sullivan and a free from Morris.

Mattie Byrne sold a dummy and swung over a neat left-footed point before a superb O’Reilly effort equalised at 0-4 each on 26 minutes. Kildare made their territorial dominance count in the ten minutes before half-time, with the movement of Darragh Kirwan and Ballyteague’s Hyland starting to cause real problems for the Meath defence.

Conway and Kevin Feely combined to set up Brophy for the lead point before Kirwan confidently resisted the temptation to take a mark and scored his first point. Then came Kevin Flynn’s fluffed goal chance, which in hindsight proved critical.

Flynn started the move on the left with a pass into Kirwan, who transferred to Hyland. He spotted Flynn’s run and found him with a handpass over the defence, but from no more than five metres out his shot grazed the crossbar.

Meath could have levelled a minute later when O’Sullivan gave notice of Kildare’s defensive frailties. Despite slipping outside the ‘D’ he was able to pick up Donal Keogan’s pass and evade two Kildare defenders to advance to the 13-metre line before forcing a fingertip diving save from Donnellan. The warning would go unheeded.

Kildare recovered from that let-off to solidify their position going into half-time. Hyland won a mark from a fine Byrne pass and when Mark Dempsey claimed the kick-out he sent Kirwan in for his second point, sadly his last. Then Hyland was found by his namesake David and recorded his only point from play.

Where that strong, dominant Kildare side disappeared to is a mystery. Where Jack O’Connor and Kildare go from here is anyone’s guess. Perhaps a psychologist is needed more than a manager.

What should not have been a surprise was that a combination of defensive frailty, poor finishing and a dearth of goals would prove Kildare’s downfall as those themes had run through the autumn campaign.

Plenty to ponder ahead of what could be a fraught league campaign in the new year. Management can do so much but where are the players with the fortitude to write a different story for Kildare football?