ABOUT an hour before the 1.30pm start in St Conleth’s Park on Saturday Moses’ Burning Bush and Noah’s Ark would not have been out of place such was the darkness and rain that descended on the County Grounds but thankfully the sun had reappeared and the rain had stopped by the time Dublin Referee, Thomas Gleeson,  threw the ball in to start the Christy Ring semi-final against Roscommon. 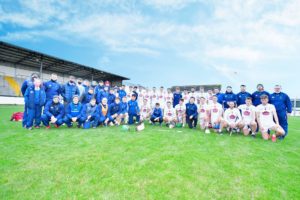 HISTORY MAKERS:  The Kildare Squad, Management and Backroom Teams which qualified for the Christy Ring Cup Final and were promoted to the Joe McDonagh Cup Photo: Paul Dempsey

Thankfully too, after a nervy opening 20 minutes in which the sides were level on four occasions and the Rossies had taken a 0-5 to 0-4 lead, no Houdini act was required as Kildare ran out convincing 21-point victors after keeping their opponents scoreless from the 20th to 43rd minute and tagging on 3-10 themselves in that period.  A feature of the game up to the 52nd minute, when Niall O’Muineachain pointed for Kildare, all the home side’s total of 3-16 at that stage came from the Naas contingent on the team.

The result meant that not only had Kildare qualified for another Christy Ring Cup Final but they also made history by qualifying for the 2021 Joe McDonagh Cup, something that was denied them in 2014 and 2018 following their previous Christy Ring Cup successes.

Maybe it was the stand that the Kildare and Antrim hurlers took before the 2018 play-off but this this year it was decreed that both Christy Ring finalists would gain automatic promotion to the Tier 2 Competition.

It was confidently expected that Offaly would provide the opposition for next Sunday’s Christy Ring Cup Final but in a major blow to the Faithful County they were defeated in the other semi- final by Down after extra time and penalties.

It took Kildare a while to settle into their stride and they also found difficulty in coping with the deep lying Roscommon corner forwards, Cathal Dolan and footballer, Niall Kilroy, who was making his first appearance for the hurlers.

Kilroy and Kildare captain, Brian Byrne, exchanged frees and points inside the first four minutes and this was followed by Cathal Dolan and Jack Sheridan exchanging points from play inside the next two minutes.

Kildare went in front on 10 minutes through a point from wing-back, Kevin Whelan, but again this was cancelled out by a point from the lively Kilroy. Byrne’s second pointed free gave Kildare the lead again in the 14th minute but almost immediately Paddy McKenna had to be smart in the Kildare goals to deny full forward, Conor Mulry.  Corner forward, Cathal Dolan, equalized again just before the first half water break.

Immediately after the water break Mulry gave the Rossies the lead again for the last time in the game. In fact, it was to be the last score for the visitors for a full 23 minutes.

The move of Brian Byrne to midfield area and a solid performance by Paul Divilly gave Kildare the momentum to take the game by the scruff of the neck and to kick on for the victory. Byrne with two frees, a 65 and a point from play plus a Jack Sheridan free and a Conor Dowling point from play gave the Lilies a four point lead by the 27th minute.

Three minutes later Kildare got their first goal, a well worked score. The ball was swept from midfield and a great passing movement involving David Slattery and Tadhg Forde ended with James Burke crashing the ball to the back of Naos Connaughton’s net.

Within 20 seconds of the restart centre half back, Rian Boran, had stretched Kildare’s lead out to 10 points when goals numbers two and three arrived. Once again Kildare split the Rossies wide open and when the ball was fed to Forde the Maynooth man was upended for the penalty by keeper Connaughton, which earned him a yellow card.

Sheridan planted the penalty and as Connaughton’s puck out strategy failed him again, the big Naas man won possession but his kick at goal was saved for the 65 which he converted himself. Again, Roscommon fluffed their puck out and the big Naas man fired home in the 40th minute.

Burke added to his and Kildare’s tally before Roscommon got their first point in 23 minutes from Dolan. Wing back, Eamon Flanagan attempted a goal from a free but the ball was pushed over the bar by Kildare’s corner back, Simon Leacy just before the second half water break.

Immediately after the resumption came O’Muineachain’s first of two points, the first non-Naas score for Kildare in the game. Paddy McKenna was called into action again in the 58th minute to make a good save from John Coyne but the centre-half forward wasn’t to be denied in the 67th minute when he beat McKenna’s replacement, Mark Doyle, for the goal.

Divilly, Sheridan and Byrne continued to keep the Kildare scoreboard ticking over for Kildare with Dolan responding with two frees for Roscommon. Byrne, O’Muineachain, Divilly and substitute, Shane Ryan finished out the scoring to give Kildare the 21-point victory.

Apart from the opening 20 minutes when Kildare had to feel their way into the game, this was an all-round convincing performance by David Herity’s men with every sector in the field on top and every player winning their personal duals.

Although Tadhg Forde and David Slattery may not have got on the score sheet their work rate and selflessness were phenomenal and others benefitted from their industry. The five substitutes used by Manager, David Herity, did nothing to lessen the strength or performance of the team. As Herity conceded afterwards his task of selecting a 26-man match day squad, never mind a team for the Final,  has become all the more difficult.

History beckons for the former Kilkenny custodian and his band of Lilywhites.