Stunned by a poor performance and a result that ended their involvement in the Championship, Kildare conceded the game in the first-half, trailing by eight points after playing into a strong breeze. 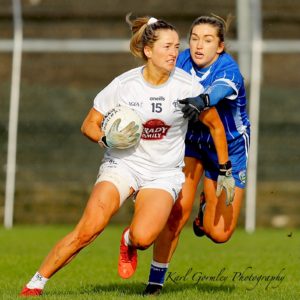 Kildare captain, Grace Clifford, tries to set up an attack in the defeat to Laois on Sunday Photo: Karl Gormley

Despite regaining control through second-half goals from Roisin Byrne (2) and Neasa Dooley for a three-point advantage in the 56th minute, a late Sarah Ann Fitzgerald goal scuppered Kildare’s hopes of recapturing a title they won in 2016.

Clare’s victory over Sligo meant that they along with Laois and Kildare were all on six points. But with Clare winning by 37 points, even Kildare’s healthy 24 points scoring difference before the game couldn’t absorb Clare’s victory in Tuam.

“Late in the second-half, somehow, we found ourselves ahead after being eight, nine points down, and we seemed to be back in control of the game. Laois were struggling to get a handle on us,” said Kildare manager Daniel Moynihan.

Laois controlled the game in the first-half as Kildare delivered a nervous performance. The team they’d defeated by 5 points in the league worked tremendously hard in midfield and exposed Kildare’s defence fell prey to the unforgiving pace.

But when Byrne and Dooley goals gave them a three-point lead in the 56th minute, it looked like Kildare were heading to an All-Ireland semi-final in two weeks’ time.

“Then suddenly, a lucky scrambled goal down the far end of the pitch and turned things around,” Moynihan explained afterwards.

It’s understandable that Kildare were slightly nervous in the first-half with an All- Ireland semi-final on offer, but gifting Laois a five-point lead by the 15th minute before opening their account spelled trouble.

After a series of wides pressured by a Laois’ sweeper, Byrne put Kildare on the scoreboard with a 15th minute score that remained solitary for a further thirteen minutes. As a response Laois scored 1-2 in six minutes as Kildare struggled in all areas of the pitch.

Mo Nerney’s fourth, an Andrea Moran point and a Leah Tarpey goal left Kildare trailing 1-7 – 0-1 in the 24th minute. Whilst Byrne responded with a second point in twenty-eight minutes, Laois should have had a second goal when Lawlor hit the crossbar and Nerney missed the easy follow-up.

A third Lawlor point and a third Kildare point through a late Lara Curran free left Kildare reeling 1-8 – 0-3 in arrears at half-time.

Kildare benefitted from the early second-half yellow card for Laois’ Sarah Ann Fitzgerald and with the wind now at their backs, they outscored Laois by 2-5 – 0-3 in eighteen minutes.

Nerney’s fifth point extended the Laois margin to nine points seven minutes into the second, but Kildare found their rhythm. Byrne capitalised on a bouncing ball that deceived the Laois defence for Kildare’s first goal. When Ellen Dowling, Neasa Dooley and Lara Curran follow-up with scores, only three points separated the sides in the 43rd minute.

Player of Match, Nerney responded with her sixth point as Laois began struggling with their kickouts. Byrne soon recorded a second goal when she hit the roof of the net from a spectacular distance.

So, when Dooley sent a speculative ball towards the Laois goal and it wasn’t dealt with properly or even at all and Kildare led 3-6 – 1-10 in the 52nd minute.

Again, Nerney responded for Laois, but Kildare had all the momentum. Bringing their tallies to 1-2 and 2-3 respectively, Dooley and Byrne gave Kildare a commanding 3-8 – 1-11 lead in the 56th minute.

But with Erica Burke off the pitch on a yellow card and Kildare visibly tiring, a loss of focus meant Laois scored 1-2 in two minutes. Fitzgerald scrambled a 57th minute goal to the net to level the game, before Nerney and Ellen Healy completed Kildare’s demise with late winning points.