Outgoing  County Kildare GAA PRO, Christine Murray, who must stand down as she has served her five year term in the position, will now be unopposed for the position of County Secretary when the virtual County Convention takes place on Tuesday, 15 December at 7.30pm following notice this afternoon that the only other remaining nominee, Martina Donnelly, had withdrawn from the race. 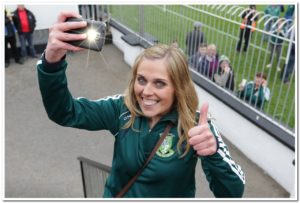 Outgoing PRO, Christine Murray, who has now been nominated, unopposed, for the position of County Secretary    Photo: Pat Tinsley

Outgoing County Secretary, Dave Cahill, will stand down at the County Convention as he has served his five year term but he has been nominated unopposed for the position of PRO.

When nominations closed at 1pm on Tuesday there were three nominations for the County Secretary position, Ms Murray, Ms Donnelly and County Development Officer, Petria Dobbins.

Ms Dobbins withdrew her nomination overnight on Tuesday night and was then followed by Ms Donnelley this afternoon.

The only contest remaining at the County Convention will be for the three Congress Delegate positions for which there are six nominees.