CHRISTY Ring’s 100th birthday was celebrated last month and come 6pm on this Sunday evening Kildare hurlers will hope to be celebrating an historic year by lifting the Cup presented in honour of the great hurler from Cloyne a week after gaining promotion into the Joe McDonagh Cup, a prize that was denied them in their 2014 and 2018 Ring successes. 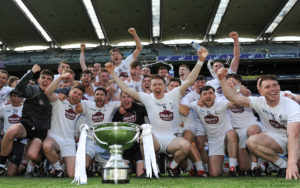 The Lilywhites will face Down at 4pm on Sunday at Croke Park as the Mournemen caused a major upset by beating firm competition favourites, Offaly, after penalties on Saturday last.

The Ards Peninsula is the hurling stronghold in the Mourne county with players from clubs like Ballycran, Ballygalget and Portaferry very much to the fore on county teams down through the years. They won the Christy Ring Cup in 2013 and will probably feel they are favourites for Sunday because of their defeat of Offlay last Saturday and probably because some of their teams play in the stronger Antrim League.

Goalkeeper and captain, Stephen Keith was the hero on Saturday last but others to shine included Daithi and Eoghan Sands, John McManus and sharpshooter, Oisin MacManus.

For one Kildare man Sunday will be a vindication of his decision to continuing to don the Lilywhite jersey when many others might have stepped away. As well as lining out at full back, Leixlip man, John Doran, is synonymous with the success of the hurling Development Squads in the county from which many of Sunday’s younger guns emanated.

Paying tribute to his full back, Kildare Manger, David Herity said, “John is such an incredible man in Kildare hurling. His big thing in coming back this year was to get Kildare promoted and I’m absolutely thrilled that he is after getting his wish. He’s a bloody hero there for all the lads. I’m delighted to see him back in Croke Park.”

Reflecting on the Joe McDonagh promotion and qualification for the Christy Ring Cup Final, the long serving Doran said, “It’s fantastic after all the years to have finally nailed promotion. I’m thrilled for all the lads. It was our target at the beginning of the year to go for promotion. It’s a huge achievement and we’re looking to finish off the year on a high next Sunday.”

The long serving defender reflected on Saturday’s semi-final win over Roscommon. “Today was like playing a final even though it was only the semi-final. We had seen Roscommon against Wicklow and we were well aware of the threat, if they were let. Yeah there was pressure on us but the lads dealt with it. We have a great mix of experience and the younger fellas.”

Doran is very pleased with the strength of the panel. “Since the lockdown a few more new fellas came in. They had been involved with the minors over the last couple of years. What they have brought to the squad has been unreal, pace, energy and drive. There’s more competition in getting on the 26-man squad than there maybe is on getting on the 15.”

There was personal satisfaction for the Leixlip man in getting promotion. “Personally, for me getting to the Joe McDonagh Cup is brilliant. We have been many years trying to get promotion. We did have the couple of wins in the Christy Ring Finals but we could never go up. This is for all the past years and the years to come and for the young lads who have come up from the minors. They will now be playing at that level and it’s up to them now to drive it on even more.”

The experienced head on Doran says he will not be resting on his promotion laurels. “The seven days or eight days, that’s all were focusing on now. We’re back on Tuesday and Friday. We’ll have two full on session and all the recovery and we’ll go hammer and tongs next Sunday”.

The Christy Ring Final has been fixed for 4pm on Sunday next in Croke Park and is part of a double header with Donegal and Mayo meeting in the Nickey Rackard Cup Final at 1.30pm.

While Down will pose an enormous threat although only two points separated the sides when they met in the League on 1st March with the Mournemen coming out on top on a 0-19 to 1-14 scoreline in Liatroim.

Kildare have a very potent forward line with Brian Byrne, Jack Sheridan and Jack Burke capable of getting the scores off the hard-working Tadhg Forde and David Slattery. Further back the experience of Paddy McKenna, John Doran, Niall O’Muineachain and Paul Divilly will provide the solid platform from which a victory can be achieved.

“The lads are playing with a huge amount of confidence. It’s our seventh game throughout the whole year and we’ve only lost one to Down by two points. Everything else has gone extremely well. We’re going to Croke Park full of confidence next Sunday,” Kildare’s Manager confidently predicted.