Kildare’s Christy Ring Cup Down Through The Years

It’s remarkable that Kildare and Down will be meeting for the first time in 16 editions of the Christy Ring Cup in Croke Park on Sunday, particularly considering that both teams have been permanent participants in the competition since its inception in 2005. 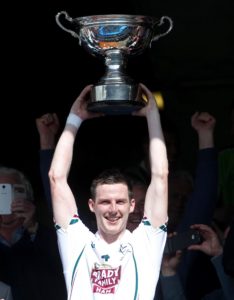 It’s equally fitting that two counties who have lifted the trophy three times between them without gaining the reward of promotion would be the ones to earn elevation to the Joe McDonagh Cup for 2021 on foot of their excellent semi-final wins.

The assumption when the whistle blew on Kildare’s classy and convincing win over Roscommon on Saturday was that they could look forward to a first championship clash with neighbours Offaly since 1978’s Leinster Championship, but their penalty shoot-out loss to the Mournemen represents one of the great shocks of the hurling season.

That said, Down have been improving over the last year and are returning for a second Ring final in a row having gone down to Meath in 2019. They also earned promotion to Division 2A of the Allianz League when overturning an earlier defeat to Derry in the final. On the way to that promotion they had beaten the Lilywhites by two points.

Down are in their fifth final on Sunday, equalling Kerry’s record, having won once and lost three times in previous deciders. They were beaten by Westmeath in the competition’s inaugural final in 2005 and then to Carlow in 2009. They were certainly not disgraced on either occasion.

In 2013 they were back in a final and secured their one and only win in the competition, beating a Kerry team who were starting a run of three successive finals. Down prevailed by 3-16 to 2-17.

Like Kildare in 2014 and 2018 winning did not secure them promotion. Six years elapsed before they reached last year’s decider, losing this time by ten points to Meath.

Kildare have reached three finals. They made a poor start to the 2007 decider against Westmeath, with John Shaw and Andrew Mitchell grabbing goals within the first 23 minutes to put Kildare on the back foot and the Lilies never really threatened to recover. They eventually went down by 2-15 to 0- 13 with Billy White top-scoring on seven points on a day when Tipperary natives David Kennedy and Paddy O’Brien failed to fire.

It was seven years before Kildare were back in a decider, qualifying to meet a fancied Kerry in 2014. Kildare had lost all their league games and needed extra time to beat Wicklow in a replayed semi- final. Kerry, meanwhile, had been promoted from Division 2A and impressed on the way to the Ring final.

Incredibly, in a rip-roaring final that produced 46 scores, the Lilywhites prevailed by 4-18 to 2-22. Up front Gerry Keegan, Bernard Deay, Ray McLoughney and Paul Divilly scored 3-16 between them.

Second-half goals from McLoughney and Deay put Kildare firmly in the driving seat after the break and despite Kerry throwing everything at them, Dermody and the defence stood firm as the underdogs ran out 4-18 to 2-22 winners.

Unfortunately, Westmeath still stood in the way of Kildare’s promotion to the Leinster Championship, and a week later they had home advantage in Mullingar as they beat the Lilywhites 2-22 to 2-13.

It took Kildare four years to return to Croke Park. 2018 was a memorable year for Kildare GAA with the under-20 All Ireland title and “Newbridge or Nowhere”, but the hurlers created their own magic with a free-scoring unbeaten run to the final. The last, crucial group game against Wicklow in Aughrim went right to the wire with Jack Sheridan and Martin Fitzgerald each grabbing two goals as the Lilies ran out 4-19 to 3-18 winners.

A week later the same duo shared three goals (Sheridan with two) as Derry were vanquished in the semi-final in Inniskeen by 3-18 to 2-13.

London emerged as Kildare’s opponents, the Exiles second final having beaten Wicklow in 2012 and earning promotion to the Leinster Championship. The teams had both operated in Division 2A of the league that spring with London’s seven-point win over the Lilies in Ruislip condemning Joe Quaid’s side to relegation.

Whether demotion is a pre-requisite to Ring Cup success for Kildare as it was in 2014 and 2018 we may find out on Sunday, but on this occasion, they raised their game considerably and blew London away in Croke Park. Sheridan’s goals were critical again, the Naas man scoring two more as Kildare sauntered to a 3-19 to 1-11 victory.

The story of the day, though, was his clubmate James Burke’s recovery from serious illness only a few months before to score eight points (five from play) in a man-of-the-match display at the tender age of 19.

Of course, Kildare would be denied promotion once more with the GAA stacking the odds against them with a noon showdown with Antrim scheduled six days later in the middle of a heatwave. The well-rested Saffrons were never troubled as they ran out twelve points winners to retain McDonagh Cup status.

In contrast, Kildare have now secured promotion after just two Christy Ring matches against moderate enough opposition in Wicklow and Roscommon, neither of whom have won the competition before. There should be no embarrassment, though, as Kildare were well due this slice of luck.

On Sunday they can go to Croke Park in relaxed mood and hopefully put the icing on their promotion cake in what promises to be a mouth-watering final.