In this week’s Kildare Nationalist we remember the events of Bloody Sunday with the support in content and memory photos supplied by the Mick Sammon Commemoration Committee and in particular we remember Clane man, Mick Sammon.

In all the accounts of what happened on Bloody Sunday, the centenary of which will be celebrated on this Saturday, 21 November, little or no mention is made of the man who was the referee on that fateful day. Who was he and why was he appointed to such a significant role? 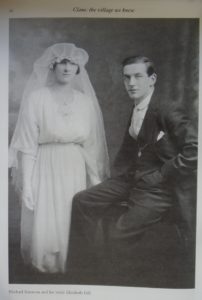 Mick Sammon was a 1919 All-Ireland medal winner with Kildare who was a member of Sinn Féin and he served time in three prisons for reading the Sinn Féin manifesto at an illegal after-Mass meeting in Kilcullen on 15 August 1918. This caused him to miss playing for the ‘Short Grass’ against Westmeath in the Leinster championship.

Having played with Hibernian Knights and Kickhams in Dublin, and now working in the bar trade in Kilcullen, Mick Sammon transferred to to the local club, popularly known as ‘The Rags’. He captained the Kilcullen team which defeated Clane by 0-4 to 0-3 in the first round of the 1917 county senior championship. Having lost to Roseberry in the semi-final (2-2 to 1-2), they won on objection, but lost to Kilcock by 5-0 to 2-1 in the final on 18 January 1918.

In 1918, Clane defeated Kilcullen in the first round of the county championship. Mick was recorded in Eoghan Corry’s Kildare GAA, A Centenary History as playing with Clane against Caragh in the county semi-final. It appears that he made a big impression on the county selectors: he made his debut for the Short Grass against Laois on 30 June winning by 2-2 to 0-3 at Maryborough, as it was known then, now Portlaoise.

He is not listed in the team which beat Westmeath by 4-2 to 0-3 in Croke Park on 12 October as he was in prison following his arrest on 15 August and subsequent one-month sentence. Mick was on the losing side in the Leinster semi-final (0-7 to 0-1) against Louth on 27 October.

Kildare County Board has accepted a proposal from the Mick Sammon Commemoration Committee (MSCC) to develop a Referee Award Scheme in the name of Michael Sammon, who refereed the tragic game that was ended by the Bloody Sunday shootings, 21 November 1920, when 14 people lost their lives and hundreds more were injured.

The Sammon family will donate The Mick Sammon Shield to honour the role of referees who volunteer to serve the GAA and their communities across County Kildare. It will be presented annually to a referee on a suitable occasion, possibly on County Final day.

Currently, there are 59 active referees at county level. Retirements and other commitments mean that new referees are needed every year to ensure that the very extensive games programme is carried out.

Criteria under which the shield will be awarded will be decided by the Referees’ Assessors and the Referee Coordinator for recommendation to the County Board.

The Co Board will administer the project and the award scheme will be reviewed after a three- or five-year period, or as decided by the County Board in conjunction with a representative/s of the Mick Sammon Commemoration Committee.