CROKE Park continued their promotion of the Christy Ring and Nickey Rackard Cups on Thursday with a virtual media event involving representatives of the four teams involved, Mayo and Donegal (Rackard) plus Kildare and Down (Ring) 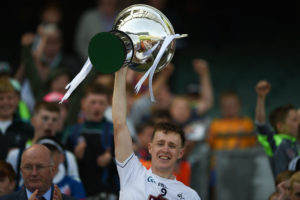 Kildare were represented by captain, Brian Byrne, who proved to be an excellent ambassador for Kildare GAA and Kildare hurling answering media questions in a pleasant, meaningful and well thought out manner.

Not unexpectedly the captain was full of praise for his Manager, David Herity, not only because of what he has brought to the senior team but also because of his approach to improving Kildare hurling at club level also.

“His intensity, his passion for the game is second to none and is something that I had never seen before. He is a huge addition to Kildare hurling,” the Naas man told the assembled on-line media.

“It’s probably a consistency level that David has tried to implement to ensure that we are not playing fantastic one day and pitching back down to another low the next day. If we can get up to a really good level and stick at it, that the consistency part of it.  That’s where teams get that winning mentality and they hone in on that. This is something that David has pushed us on. He never lets us settle at what we are really good at, he’s always looking for more and more. I have never been in the Kilkenny camp but I can only assume that is the way it goes there. You can see from the ruthlessness of the way they pick teams. You have to be at your best the entire time or you are simply put on the sidelines David expects the best from everyone all the time,” the winning captain of 2014 explained.

Just like his Manager and Minor Manager, Eoin Stapleton, Brian Byrne is mindful of the gap between minor and senior levels but recognises the work that is being done within the county to close that gap with the planned introduction of an U20 squad. “The new ground being broken by the minors is definitely encouraging, if we can get that into the 20’s we can then push it into the seniors like one big train in motion from minor to 20’s to seniors “, he added.

“One big thing that David has done, in conjunction with the senior players, is to promote the clubs a lot more. He has really pushed clubs to get involved and he has gone and done sessions himself with the clubs just to give them a feel for how he does things or to offer help in any way he can,” Byrne continued.

The Kildare captain believed that the “Roar for Ruairi”, which the hurlers became involved in earlier this year, was important first and foremost as a fundraiser for six-year-old Ruairi McDonnell but it also offered the hurlers and opportunity to be leaders and role models for the hurling community and for the county.

“Ruairi is from Clane, the club of our two keepers Paddy (McKenna) and Mark (Doyle) as well as Cian (Shanahan) and Sean (Christanseen) and they were quite close to him and Ruairi was a big hurling fan posting about the games but he didn’t have the luxury of going to them so we felt, as a group, that it was the right thing to do.

“It was a weird time for the entire country but it was nice to see that the Kildare hurling community come together to fundraise and we could be leaders as a senior team we could promote it ourselves and people could follow,” the captain further explained.

Byrne also saw it as an important communication and promotion opportunity for the senior hurlers adding that it was a lot easier for footballers to be noticed in Kildare but as the hurlers wore helmets they weren’t as easily recognised by the younger kids.

While firmly focussed on the Christy Ring Cup Final and the threat that Down will pose the captain saw the promotion to the Joe McDonagh Cup for 2021 as “a fantastic opportunity to play at a higher level, that’s the only way that we’ll improve. Our big aim though, is to make sure that we don’t zig/zag up and down.  We want to go up and stay there and improve from there.”

“After the unfortunate exit for our footballers last weekend all focus now turns to hurling to deliver this weekend,” the captain concluded.

We extend our Very Best Wishes and Good Luck to David, Brian and all the team for Sunday’s Final.