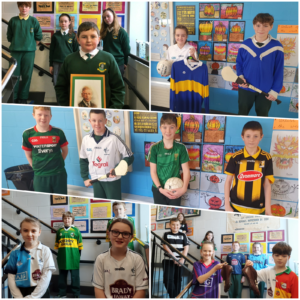 Some of the events during Scoil Bhríde’ commemoration of Bloody Sunday

A VERY special presentation by pupils of Scoil Bhríde in Kilcullen last week commemorated the tragic events of Bloody Sunday in Croke Park, the centenary of which was marked nationally last Sunday.
Organised by the Decades of Centenaries Committee in the school, the presentation focused on two particular people who were among the 14 who died when Crown forces opened fire in the crowded football venue, as retaliation for the earlier assassination of British Intelligence members in Dublin.
One of these was the referee for the fateful game between Dublin and Tipperary on 12 November 1920, Mick Sammon. Originally from Clane, he had lived and worked in Kilcullen, and played for ‘The Rags’, the local Kilcullen GAA team, as well as lining out for Kildare’s county.
A special Scoil Bhríde connection in the school’s presentation came through Sixth Class pupil Daniel Lynch, whose great grand uncle, Joseph Traynor, also died in the Bloody Sunday massacre. At 20 years of age he had cycled from Clondalkin to Croke Park for the match, and was one of the first to be shot when a unit of the Black and Tans marched onto the field and opened fire. He died later in hospital.
Daniel, with classmates, Aoibhe, Myles and Alannah and the help of some of their teachers, made a short commemorative programme about Bloody Sunday, with the sad story of young Joe Traynor as its central focus. The video was shown to several classes in Scoil Bhríde.
The school’s commemoration also included a GAA Jersey Day, with pupils collectively wearing vintage and modern GAA jerseys from many parts of the country and beyond, including New York.
An Irish history and GAA quiz was also held in the afternoon helping to make a great success of an event that helped to close the gap of one hundred years and made history come to life for all the students in Scoil Bhríde.

MURPHY MAKING THE MOST OF SIX NATIONS SUCCESS