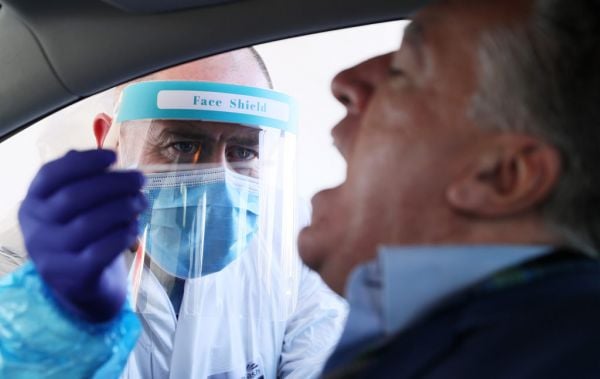 A further 10 people with Covid-19 have died in Northern Ireland, the region’s Department of Health has said.

Yesterday saw another 10 people die in the region, as the North has battled a recent surge in the virus that has placed hospitals under pressure.

In recent days, First Minister Arlene Foster warned hospital numbers in the region were at their highest since the outset of the pandemic – surpassing the first surge of the disease seen in springtime.

The death toll recorded by the North’s Department of Health now stands at 933. There were also another 342 confirmed cases of the virus recorded in the last 24-hour reporting period.

The number of cases represents a significant drop from recent weeks which saw 1,031 recorded in one day just over a month ago on October 17th.

However, hospitals remain under pressure while there are more than 100 active outbreaks of the virus in care homes.

It comes despite the implementation of a circuit-break lockdown in the region in recent weeks, with some restrictions allowed to lapse on Friday.

Though coffee shops and close-contact services such as hairdressers were permitted to reopen, they must close for two weeks from November 27th in another attempt to stem the spread of the virus.

Two weeks of beefed up restrictions will see non-essential retail outlets added to a closure list that already includes much of the hospitality sector, though schools will remain open.

The announcement by the Stormont Executive was widely criticised by business representatives, who have accused the administration of mishandling the pandemic response and failing to provide sufficient financial support to help struggling firms.

A total of 49,784 people have tested positive for Covid-19 in Northern Ireland since the pandemic began.