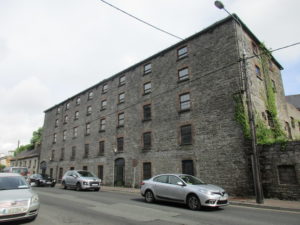 A LOCAL TD has called on the Government to address the blight of derelict sites around Kildare, and done so to their face in the Dáil Chamber in Leinster House this week (19 November).

“The programme for Government promises to prioritise a ‘town centres’ approach to the regeneration of our towns and villages, and to to bring vacant and derelict buildings back into use and promote residential occupancy,” sazid Deputy Patricia Ryan.

“We need to make this a priority so that towns like Monasterevin, Portarlington and Rathangan can have the blight of derelict buildings removed from their main streets, and that these will be transformed into much-needed homes,” she pointed out.

“They can also be transformed into business premises so that the daily exodus from Kildare and Laois in search of work might be reduced, and this will also have a positive impact on the environment,” she said.

“The Tánaiste responded by saying that this is very much a priority for Government and that they are determined to make more progress on it,” she stated.

Her co-opted colleague Cllr Noel Connolly, brought a motion to this week’s Kildare-Newbridge Municipal District meeting in relation to the derelict buildings on Dublin Steet in Monasterevin which he hopes to have entered on to the Derelict Sites Register for the county.

This woul mean a levy of seven per cent of the value of the property would be due annually to Kildare County Council which would then “hopefully encourage the owners to make productive use of these beautiful heritage buildings”.

“In their current state they reflect badly on our town, given their prominence on our busiest streets,” said Deputy Ryan.

O’Loughlin: Student nurses and midwives to get PUP