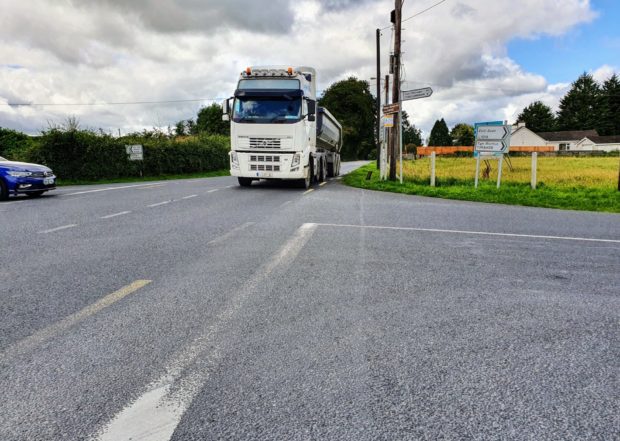 Dag Welds Cross, on the route to the landfill

PLANS to triple the capacity of the Drehid Waste Facility – halfway between Timahoe and Derrinturn – have been turned down by An Bord Pleanála (ABP).

Bord Na Mona had been waiting almost three years on this decision, having originally applied in December 2017 to extend this facility by an additional 21Ha, to accommodate an additional 250,000 tonnes of waste per annum, up from the originally permitted 120,000 tpa.

ABP cited six EU Directives in relation to habitats, birds, wildlife and groundwater in their refusal, particularly with the potential for ammonia-runoff into tributaries of the Barrow system.

Local councillor Aidan Farrelly welcomed the news, as the extension would have brought an increase in traffic that he felt the local road network was not capable of hosting.

In fact, Kildare Co Council had estimated a bill of nearly €14m to fund road improvement and traffic calming measures on the routes serving the facility, a figure that was deemed “economically unviable” by Bord na Móna.

“A good decision has come through,” said Cllr Farrelly.

“There will continue to be close calls at Dag Weld’s and Firmount Cross, and now we need to find the money to work on these junctions. There’s five roads converging on Firmount Cross,” he pointed out.

The Drehid facility was built in 2013 to extract methane from landfill and convert it into useable electricity, but in recent years the firm has taken advantage of the remote location and built the second-largest incinerator in the nation after Poolbeg in Ringsend (120,000 tonnes per annum, compared with 600,000 tpa).

The additional tonnage was estimated to take between 15 and 20 trucks a day to deliver, depending on whether the facility takes deliveries seven days a week, or just five days a week as promised in the ‘further information’ submitted to ABP in May 2018.

Bord na Móna’s own report on the traffic volumes on the R403 (Allenwood-Carbury) quotes less than 25 per cent of the trucks on this road are coming from, or going to the plant.

However, the very same report concedes the traffic light junctions in both Clane and Prosperous accessing the R403 are “currently operation over capacity”.

The reason it was decided at ABP rather than at the Planning Section in Kildare Co Council is because it was deemed a ‘Strategic Infrastructural Development’ with more national than local ramifications.

“The entire area surrounding the Drehid site has been completely hamstrung by this delay, and we [as councillors] are told practically every month that no significant road projects could be considered until a decision was made on this application,” he pointed out.

“Sites such as Dag Welds cross, Firmount cross, the pedestrian crossing in Allenwood village continue to pose significant concerns to local users be they pedestrians or motorists, yet no matter how many times we raise these issues, we are told that nothing can be done until we know more about Drehid,” he added.

“Only Prosperous has any funding for traffic calming on the Drehid access routes,” he said.

“I mean, there’s no increase [in traffic] but the site is still open,” he added.

“Kildare Co Council has to spend more than 50% of its roads budget every year on local roads used by HGVs going through towns and villages that can’t cope with them,” he continued.

“I want those roads to be suitable for these trucks, and that we don’t suffer for this,” Cllr Farrelly added.