Great win for Kildare in the Christy Ring Cup Final in Croke Park on Sunday. This is the report on the game from Richard Commins which appears in this week’s Kildare Nationalist.

KILDARE hurlers brought down the curtain on the 2020 GAA season in the best way possible as they lifted their third Christy Ring Cup in seven years after a memorable but hard-fought win over resilient Down in Croke Park on Sunday evening. 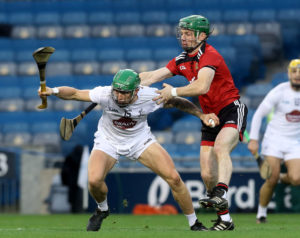 Not for the only time in the game
Down’s Michael Hughes tries to come to grips with David Slattery in the Christy Ring Cup Final Photo: ©INPHO/Lorraine O’Sullivan

Any doubts over the merit of the Lilywhites’ promotion to the McDonagh Cup were dispelled as they went toe to toe with a hard-tackling Down side who had shocked the competition’s hot favourites Offaly in the semi-final a week previously.

Kildare had to overcome the absence of goalkeeper Paddy McKenna through illness but his Clane club mate Mark Doyle was faultless all afternoon, as were the back six in front of him. At the other end Kildare adopted the motto of “goals win games”, raising three green flags at crucial times to ensure Down were always chasing the game.

David Herity’s side got off to a flying start with retired county footballer David Slattery taking a mere 14 seconds to mark his return to Croke Park with a point. Down free taker Oisín McManus equalised soon after from a free but the Lilies scored 1-2 within two minutes to take an early grip on proceedings.

Brian Byrne scored from a free before Paul Divilly pointed from long range. Kildare’s first goal came in the 5th minute with Jack Sheridan’s driven shot forcing Down goalie Stephen Keith into a parry and Tadhg Forde was on hand to finish to the net.

Down rallied quickly however and by the first water-break they were level having scored five points in a row with Kildare struggling a little with their robust play. McManus scored two as did dangerous centre forward Pearse Óg McCrickard, with the pacey Tim Prenter on target as well.

Kildare gave themselves a foothold again in the second quarter, scoring four of the next five points. Byrne’s 35 metre free on 19 minutes was desperately needed to steady the ship and after McManus had pointed from way out, Byrne knocked over two more frees.

James Burke, slowly working himself into the game, put Kildare three clear on 28 minutes. As the game ebbed and flowed, Down looked like going in level at half-time as Prenter scored a brilliant point after a one-two with McManus, McCrickard scored his third and when Niall Ó Muineacháin over-carried, McManus fired over his fifth of the half.

There was a sting in the tail though as Kildare scored a crucial second goal. Paul Divilly picked up a loose ball 30 metres out and headed straight for the Hill 16 goal before planting a fine shot to Keith’s left. That sent Kildare in at the break leading by 2-7 to 0-10.

Herity’s side made a slow start to the second half, though, with Donal Hughes and McManus pointing to put the stubborn Mourne men back within a point.

Sheridan had been struggling to get into the game and remained scoreless throughout the first half but he came to the fore in the next two minutes as Kildare regained the upper hand.

The Naas man first took on a free from his own ’65 metre line which sailed between the posts. Then, after Kildare won the resulting puck-out, Byrne popped over from play.

Kildare’s power surge continued when Kevin Whelan sent in a long ball to Sheridan and the mercurial number 11 somehow finished to the net from the most acute of angles.

The Lilies were now six points clear but back came Down once more and by the time of the second water-break they were within three. McManus scored three points in a row before Byrne pointed a free and McCrickard found the range with his fourth. It was 3-10 to 0-16 with the final quarter to come.

When Paul Sheehan and Daithí Sands scored two within a minute on the restart, Kildare looked on shaky ground, their lead now down to a point.

Again, though, the sands shifted and Kildare reeled off four points in succession between the 56th and 66th minutes to push themselves five clear. The first point, arguably the most important of the game saw substitute Kevin Aherne and Byrne combine to set up Burke for his second of the game.

Slattery was fouled for the umpteenth time – Down had no answer to his pace and trickery – for Byrne to point another free before Sheridan hit another huge one, this time from inside his own ’65. Substitute Shane Ryan angled one over from the Cusack Stand side to ease Kildare 3-14 to 0-18 ahead with four minutes of normal time left.

Make no mistake, though, Down are a spirited, dogged outfit (just ask Offaly) and they were by no means finished. Prenter scored in the 67th minute and then Conor Woods pointed a free from midfield a minute later. As we entered injury time Hawkeye adjudged another Prenter effort to be over the bar and when Sean Christianseen conceded a free which Sheehan converted, Kildare nerves jangled.

Down were within a point and the spectre of extra-time reared its head. But when young substitute Cathal McCabe battled to win a ’65, Sheridan stepped up to find the range and with five minutes of injury time played the same man struck a free from midfield to seal a famous Lilywhite victory.

Kildare had heroes all over the field with the half-back line of Ó Muineacháin, Rian Boran and Whelan providing the foundation for victory while the full-back line and goalkeeper behind them were no slouches either. Divilly carried the fight from midfield and Byrne showed all his leadership qualities up front. Sheridan sprinkled his gold dust at critical moments while the work-rate of the entire forward line proved crucial in keeping Down at bay.

For the second time in three years, although in quite different circumstances, captain Byrne stepped forward to lift the Christy Ring Cup. A huge challenge lies ahead, but the attitude, commitment and skill level displayed these last few weeks augur well. Roll on 2021.