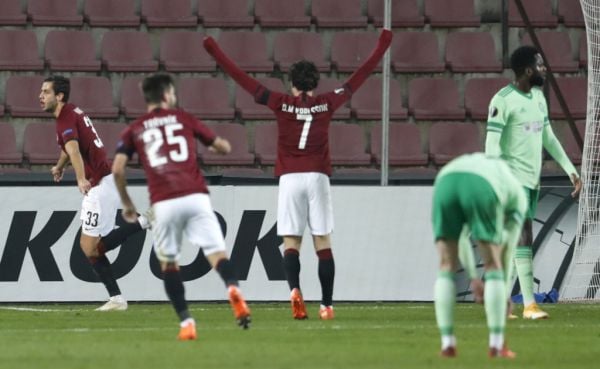 Neil Lennon will find himself under further pressure after Celtic tumbled out of the Europa League with a dismal 4-1 defeat by Sparta Prague at the Generali Arena.

A section of the Celtic support had publicly called for the Hoops boss to go earlier in the week but even they would have been encouraged when recalled striker Odsonne Edouard gave the Scottish champions the lead in the 15th minute, but poor defending again proved costly.

David Hancko levelled in the 27th minute and then Lukas Julis, who scored a hat-trick in Sparta’s 4-1 win at Parkhead earlier in the month,  put the home side ahead and the Czech outfit also hit the post before the break.

Celtic responded positively after half-time but Julis grabbed his second in the 80th minute with substitute Srdan Plavsic adding a fourth in the final seconds.

That left the Parkhead side hopelessly bottom of Group H with one point from four fixtures, two wins in their last nine games in all competitions and with another inquest imminent.

After a 2-2 draw against Hibernian at the weekend, Lennon reshuffled his side.

Christopher Jullien returned to the defence after recovering from a back complaint that had kept him out since September while fellow Frenchmen Olivier Ntcham and Edouard, and Israel defender Hatem Elhamed, were also back in the side.

There was moment of silence ahead of kick-off in memory of former Argentina superstar Diego Maradona who died on Wednesday and before Celtic started with impressive purpose.

Sparta attacker David Moberg-Karlsson flashed a drive from 25 yards wide of the target in the sixth minute by way of a warning.

However, Celtic forged ahead when Mohamed Elyounoussi broke following a home attack to move the ball on to Edouard and the France Under-21 player exquisitely turned Hancko inside out before driving in off the far post.

The lead proved to be fragile.

Sparta’s equaliser came when Celtic failed to defend a corner from the left properly and when David Pavelka turned the ball towards goal, Hancko stopped it eight yards out and played onside by Callum McGregor, turned and knocked it past Scott Bain.

Lukáš Juliš has 5 goals in 2 games against Celtic this season 🔥🔥🔥#UEL pic.twitter.com/dCMqX5dKeH

Sparta’s second goal was a calamity for the Hoops defence.

Captain Borek Dockal sent a cross in from the right and it somehow evaded Kristoffer Ajer and Jullien and with Bain hesitating, Julis nipped in at the back post to bundle over the line.

In the final seconds of the first half Sparta midfielder Ladislav Krejci headed a free-kick from Dockal against the post with the ball ending up in the hands of the relieved Bain.

Only a fine save by Sparta keeper Florin Nita three minutes after the restart prevented Edouard’s 25-yard free-kick from sneaking in at the post, before Ryan Christie curled a shot from 20 yards wide.

2️⃣ matches
2️⃣ 4:1
It seems we love to play against Celtic! 🥳 pic.twitter.com/UM2FzFxMrD

Lennon’s side kept up the tempo.

In the 63rd minute the unmarked Edouard missed a sitter when he shot straight at Nita from six yards after being set up by Ntcham.

Two minute later Tom Rogic replaced captain Scott Brown but it was still huffing and puffing and with 10 minutes remaining the home side helped themselves to a breakaway goal.

The excellent Moberg-Karlsson crossed for Julis to volley in a third from close range, and in a late break Plavsic, on for Moberg-Karlsson, raced through to round Bain and grab a fourth.