Elves… and Santa get permission to visit Kildare kids this Christmas 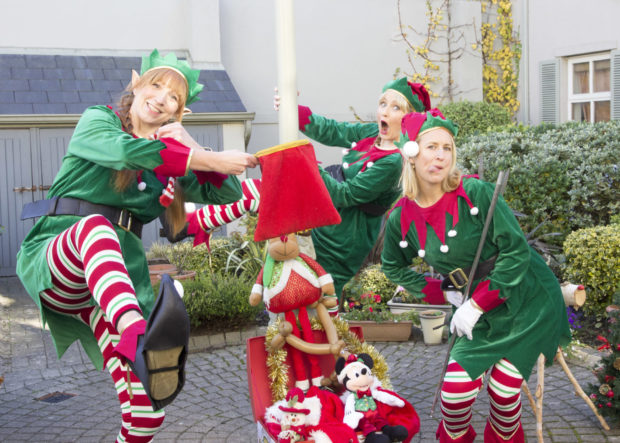 Senior Elf Marshmallow Sprinkles with some of the other elves, who will help brighten up your Christmas this year

TWO huge pieces of news came in from the North Pole this week as Santa has decided “this year that Kildare will be his first port of call” on 24 December, and that he has okayed a number of his elves for some special home visits in the county.

This was revealed by senior elf ‘Marshmallow Sprinkles’, Ambassador from Lapland, in an exclusive interview with the ***Kildare Nationalist*** this week.

Senior Elf Sprinkles was able to announce that in the run-up to the Big Night she and a number of her colleagues have been released from toy-making duty, and will be able to come and visit kids on their own driveways for a “socially-distanced doorbell visit”.

In fact, these doorbell visits started on Friday (13 November), and can be booked for any kid – officially, there’s no naughty list this year – through the muggle agency ‘Genie Mackers’ who look after Elvish bookings in the Kildare region. (Details below.)

Despite the lockdown, senior elf Sprinkles said it was fairly easy to organise their visits to kids because of the huge amount of their fairy cousins that live in Kildare.

“They know where all the kids are, and know who exactly is on the good list and naughty list, but because of the extra lockdown in Kildare Santa has decided there won’t be a naughty list this year!” she announced.

“We want to keep the magic alive this Christmas in beautiful Kildare!” declared Senior Elf Sprinkles.

She will be accompanied by Elf Twinkle Toes and Elf Cookie Sparkles, but that they were just part of a 10-elf team released from North Pole duty especially for Kildare visits.

Later, The Nationalist spoke with Anne Doyle, a spokesperson for ‘Genie Mackers’, who have been contracted locally by the North Pole’s Ministry for the Craic to help with the Elf visits.

Ms Doyle explained the importance of this contract, because since March their 12-year business as children’s entertainers practically “collapsed overnight” due to the pandemic.

“Genie Mackers has entertained children all over Ireland in a variety of settings including birthday parties, weddings, christenings and communions,” she said.

“We have also entertained children in direct provision, hospitals and other community settings, and have over 20 entertainers on our team, all of whom have a variety of different skills including actors, artists and musicians,” said Ms Doyle.

“Our team of fairies, genies, elves and superheroes have brought love and laughter to thousands of children all over the country,” she pointed out.

However, on the weekend of 13 March, their business collapsed overnight, and most of their work entertaining children in the family home was made Covid impossible.

“Face painting was a massive part of what we do, and now we don’t know if it ever will come back because of the close contact,” she pointed out.

“Communion season in May – our busiest time of the year – came and went without a single booking.

“A distant light emerged at the end of June where we began to offer socially distant outdoor parties, but then we had to go into lockdown again, and Level 5 finished all,” lamented Ms Doyle.

The Genie Mackers Elves are now offering socially distant doorbell visits from now until 24 December where they will come to your door and deliver a personalized gift to the little people awaiting a visit from Santa.

They can also deliver your letter to Santa and make sure he gets it in the North Pole.

“We’ve  constructed a method of delivery that is safe and socially distant and protects both the elves and the  children – same as ordering a pizza!,” said Ms Doyle.

Prices start at €55 for a visit, but discounts can be organised for neighbours in the same estate.