Irish stable staff are recognised and wanted all over the world

Our look at the Irish Stable Staff Association through the eyes of CEO, Bernard Caldwell and Ger Flynn, Board Member and Head Travelling Lad in Jim Bolger’s Yard, as it appeared in this week’s Kildare Nationalist.

WE caught up with Bernard Caldwell, CEO of the Kildare based Irish Stable Staff Association, just as he pulled into Thurles Racecourse last week as he continued his daily visits to the Racecourses of Ireland. 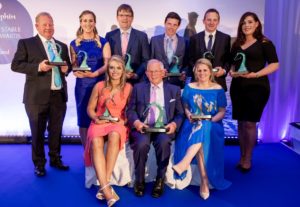 “I believe in being visible as much as possible as I see it as out of sight, out of mind. I try to attend as many race meetings as possible. It’s very easy to sit in front of a computer and tell people what to do but I prefer to speak to people directly,” the Leixlip, or to be more precise, Confey, resident explained.

Caldwell took over as Chairman and CEO of the Irish Stable Staff Association, which is based in Curragh House in the Curragh, in 2006 and in accordance with good corporate governance practice, relinquished the role of Chairman in 2016 to continue the CEO role.

The aim of the Association is to protect, advise and educate its members and to promote basic rights of all staff that work in the racing industry in Ireland including all stable staff as well as stud staff to a certain extent.

“The Association was originally set up in the early 70’s but was revamped in the early 2000’s with a proper committee structure and Board. A lot of improvements were made under the previous Chairman, Dan Kirwan, and I build on that and continued the improvements. We are a very reputable organisation nowadays within the horse racing. Importantly we have a seat on the Board of HRI and we have representatives of all the main Yards on our Board,” the CEO tells us.

Funding for the Stable Staff Association comes through a percentage of the racing prize money which Caldwell says is sufficient to run its affairs.

“In days gone by stable staff didn’t finish off their education but because of their love for horses they went directly into racing. Nowadays they are well educated people who are recognised all round the world who want to treated well. Standards have now increase, terms and conditions have improved and facilities have improved in the Yards and on the Race Tracks for staff. Further improvements are always required,” he added.

Education is one of the big aims of the Stable Staff Association and courses are sought through HRI who then subsidise the courses for the racing staff.

“Irish stable staff are recognised and wanted all over the world because of their knowledge of horses and how to handle a horse. If any of the Irish stable staff wanted to go into the racing industry abroad, generally they would have no trouble getting a job,” the CEO believes.

Caldwell’s motto is to work with everyone. “If you have enemies you won’t get anything done. You may have disagreements one day and agreements the next but at the end of the day we try to work together.

We enjoy a great relationship with the Trainers Association, RACE, the Breeders, the Racecourse Managers and HRI; the seat on the Board of HRI is a big benefit to us. There is nobody in the racing industry who is not aware of us and of what we do,” he said.

Caldwell is full of praise for the Stable Staff Annual Awards, which is supported by Godolphin, which he says has €100,000 in prizemoney and a similar amount in promoting the event. Because of Covid the 2019 Awards have been deferred until early next year.

As for the future, the CEO says they will continue to build on their relationships with all involved in the racing industry in Ireland as well as continuing to support its members for improved wages and conditions.

By Pat CostelloGER Flynn Irish Stable Staff Association Board Member and Travelling Head Lad with the Jim Bolger Yard took time out from his busy work schedule at Dundalk Races on Friday last to tell us about the various stable staff roles within the horse racing industry in Ireland and the work of his Association in supporting its members.

Originally from Edenderry in Co Offaly, Flynn has been working for almost 18 years for Jim Bolger’s Yard and has seen the role of stable staff evolve into a well-recognised and valuable part of the horse racing industry in Ireland.

“In former times stable boys, stable hands and stable lads were kept down as there were there just to look after the horses and were never allowed rise up. All that has changed now. We now have a main role like the Travelling Head Lad, who would be known as the Transport Manager in another business. Then we have the Head Lad, who would be the Manger, the Barn Leaders who would be line managers, and the exercise riders, the jockeys and grooms who look after the horses,” Flynn explained.

A Racing Yard requires a good working relationship from the trainer to the last person in the Yard according to the Edenderry native.  “In any other industry if someone is missing then usually someone else can take their place because he or she knows how to work a computer or whatever. In racing if a lad is missing then whoever is replacing him on a horse that day may not pick up something about the horse and therefore the trainer may be uninformed about that horse. Even the smallest job in the Yard is a vital part of its working,” he explains.

“Jim Bolger has a picture in the barn of the All Blacks V Australia Rugby Cup Final. The picture shows the Australian full-back missing a tackle on the Al Blacks winger by a hare’s whisker. Underneath “races are won or lost by inches” has been written by Jim,” he adds.

Roles within the racing industry have evolved and improved in the 18 years that Ger Flynn has been involved. “When you came out of school in my time the Career Guidance Teacher had leaflets on ANCO, (the then training authority), the army, the guards, the navy or the building industry. People went into racing because of their love of horses but there was a limited structure there. Now anyone starting in racing knows that they have full time employment and they can qualify for a pension.”

“They have the support of the Stable Staff Association, the HRI, the Turf Club. People realise now that they have rights, holidays, time off, a pay structure,” according to the Travelling Head Lad. “People know that they have a career, a pathway and a future in it and to be fair to HRI they run programmes and courses which help with their career or mental issues.

“Jobs in the Yards are always interesting and different people keep coming in which is very important in the times we are in. With no interaction people feel can isolated if they are working from home. We are lucky, we have interaction every day and we are able to tell if a lad is a little bit off or things are not so good, we can go and talk to them,” according to Flynn.

The relationship between the jockey and stable staff is “of the most beautiful bonds you’ll see in racing. When a jockey goes by the line in a race be it the Gold Cup or whatever, the first person he meets is the groom. The jockey will nearly jump off the horse to hug him because he knows that the groom has minded this horse, got him there and the job had been done right. It’s the closest thing for a lad to winning an all-Ireland”.

Ger Flynn is very appreciative of the support received for the Annual Stable Staff Awards “Godolphin have been involved for the last six years and Joe Osborne and Diana Cooper from there plus Barbara White from HRI do a real professional job. It’s our All Stars, our Oscars.”

A typical Race Day for Jim Bolger’s Travelling Head Lad would begin the night before with organising the staff to travel to the race. The day would then begin by rising at 6.15/6.30 to check if the runners were fit to go racing. He will then report this to “the boss”.  Next, he ensures that the horse box is ready, all the tack, colours and passports are ready and most importantly that the correct horses are on truck. “I usually get to the track about two or two and half hours before the first race to settle horses in, get the stuff to weigh room and the colours to the valet,” he says.

After the race it’s all about loading the horses back up and “having a laugh on the way home”. Even when they return to the yard the work is not done as the horses have to be settled back in, the truck washed and disinfected and the colours delivered back to the office.

“Then we go home and watch the racing back,” he laughs. “It’s the days abroad that we live for. Days like four weeks ago when MacSwiney won in Doncaster. Winning a Group 1, that’s what we live for,” Ger Flynn concludes wistfully.