John Doran Bows Out At The Top 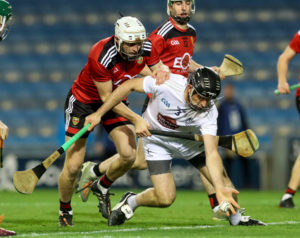 John Doran in action against Down in the Christy Ring Cup Final  Photo:  ©INPHO/Lorraine O’Sullivan

“He’s the closest thing to Noel Hickey I ever met and Noel was the best hurler I ever played with. Everything about him, just attitude, drive and professionalism, just a love and passion for the game. John Doran has every single bit of that. It’s not easy, he has two young daughters at home and obviously a very patient wife. He’s amazing.”

If that doesn’t paint enough of a picture of the man the fact he was out training the Clane under-7’s the night after the Ring final surely does.

Herity was hopeful of retaining Doran and other experienced servants like Paul Divilly and Niall O Muineacháin but the 34-year-old Leixlip man had other ideas and it will be a blow to the Kilkenny man.

But Doran’s goal was achieved: promotion from the Christy Ring after fifteen seasons soldiering for the Lilywhites, and he announced his retirement a couple of days after clubmate and football stalwart Tommy Moolick.

Doran came into a Kildare team operating in Division 2B in 2006. The Lilies had been heavily beaten by Westmeath in the Christy Ring semi-final the previous year, conceding seven goals in the process, and he earned his first start in the league game against the same opposition in February. Doran played left corner back in a game played on his home ground in Leixlip, with Kildare this time running the midlanders to four points.

A year later Doran made the first of four Ring Final appearances, coming on as sub for Ronan Tynan as Westmeath again beat Kildare (2-15 to 0-13).

By 2011 Doran was a regular feature in the full back line and earned national recognition with a Christy Ring Champion 15 award, something he would repeat in 2016, despite neither being a year in which Kildare reached the final.

John lined up alongside the O Muineacháin brothers in the full back line as Kildare shocked Kerry to take home a first Ring Cup in 2014 and four years later he was his imperious self in the number 3 jersey as London were sent packing in his third final.

Of course, Kildare were denied promotion on both of those winning occasions but Doran got his just reward this year to bring down the curtain on a magnificent inter-county career, playing brilliantly in providing a protective barrier in front of rookie goalkeeper Mark Doyle.

No doubt he will continue to drive Leixlip on at club level while his day job as a Games Development
Administrator with Kildare GAA will keep him at the heart of hurling development in the county.

Doran was also instrumental in the creation of the Kildare Hurling Action Plan in 2018.

Kildare Nationalist Sport wish him all the best in his inter-county retirement.