TURAS Is On The Right Road In Kildare

In this week’s Kildare Nationalist we featured the first of a three part series on Coaching and Games Development in Kildare GAA where a huge amount of work is being undertaken on Coach Education and on the development of Gaelic games in the county.

WATERFORD man Pat Daly would have been a happy man this weekend with his beloved county qualifying for the All-Ireland hurling final following the defeat of Kilkenny on Saturday night.

The likeable Daly would also have been a happy man last January as he left his role in Coaching and Games Development in Croke Park after some 20 years in which he introduced some hugely innovative methods in the coaching of gaelic games in Ireland and throughout the world.

Those innovative methods culminated in the annual Coaching Conference which attracted up to 900 GAA coaches to Croke Park over two days to hear from and learn from some of the best coaches across the GAA, and other codes in Ireland as well as a coterie of top-class coaches and practitioners from other codes throughout the world. 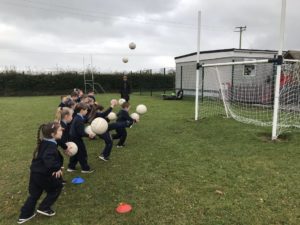 The GAA is lucky in that taking over from Daly is Kildare man, the equally likable, Shane Flanagan, the former Operations Manager at Leinster GAA. This year will obviously have been a very difficult year for Flanagan because of the Covid – 19 restrictions but nevertheless the work of Coaching and Games Development continued apace either on line or in practical sessions.

No more was this in evidence that here in county Kildare where six Games Development Administrators (GDA) assisted by nine Games Development Officers (GDO) delivered practical and on-line coaching to the clubs and the schools in the county. That team of 15 is led by Games Manager, Noel Mooney with the oversight at County Board level through Shane Power, the County Coaching Officer.

This week, in the first of a series of three, we take a look, in the Kildare Nationalist, at Coaching and Games Development in Kildare are find out the amount of hard work that is going on at schools, clubs and county board level.

“We operate under the Leinster GAA Programme, TURAS”, Shane Power, the County Coaching Officer tells us. “TURAS is the Irish word for “journey” and it signifies the principles of the programme on the pathway for coaches and players.”

In clubs, for example, TURAS will work by providing player pathway workshops applicable to each age group, and offering resources to all coaches. Workshops will also be provided for club coaching officers to assist them in rolling out TURAS, and staff employed by Leinster GAA and the County Boards will provide practical supports to coaches while they are engaged with their own teams in their club with the player at the centre of all activities.

The five key principles of TURAS are

David Murphy, who has been involved in the coaching programme in Kildare for over 20 years, linking back to the days when the great Tommy Carew was coaching in schools in the county. David has overall responsibility as GDA for the Kelloggs Cul Camps as well as the Super Games Programme which is one of the most successful programmes in the country which enjoys equal success in Kildare.

“In a normal year Kildare would have some 60 Cul Camps over eight weeks of the summer and we see it as a festival of football and hurling in the club for the week and in county for the summer months. The clubs have really bought in to the camps. Every club in the county hosts a camp and some would host two camps, a hurling and a separate football camp. If we didn’t have the backing of the clubs then the camps would not be as successful.

Not only are the camps a success for the participating young players they are also a success from a coaching employment point of view. “This year we employed 140 coaches which is massive. It’s great for the local economy and it’s something that we in the GAA don’t give ourselves enough credit for.

Murphy usually has his schedule of camps all sorted in December each year but obviously the Covid -19 lockdowns disrupted that schedule tremendously. Nevertheless, although camps were originally cancelled, the camps did get underway on July 20 and were due to run for five weeks and 34 camps were to take place in Kildare in the period. After three successful weeks however the county lockdown in Kildare forced the abandonment of the remaining camps in Kildare. In the three weeks of the 2020 Kildare Cul camps just over 3,100 kids participated which was a phenomenal success considering the restrictions leading up to July.

In a normal year Kildare Cul Camps would attract 8,500 participants, a huge body of work for Murphy, his colleagues, the clubs and the coaching staff.

Venues for the Super Games Programme which also comes under the responsibility of David Murphy can be either a school or a club and the programme runs from six to eight weeks, one night or afternoon per week. The programme is for children in their teens and it involves the running of small sided games for fun with the hope of attracting these players into Gaelic games or rekindling their interest in the games.

Former county footballer Tadgh Fennin has been in the GDA role for over 10 years now and his area of responsibility includes the GO Games, Referee Education and Second Level schools in the county.

“The original concept of the GO Games was to give every player enough game time and enough touches of the ball. The games are small sided so you have more teams with less numbers on the teams so players get more game time and it also encourages different skills of our games. In Kildare the Go Games include players up to 11 years of age and operates through the North and South Boards in the county. The games are non-competitive and covers thousands of kids,” Fennin explained.

Tadhg and his team are pushing the numbers through the schools with obvious benefits for the clubs in the school catchment area. Coach Education is also an important part of the Go Games programme.

He also operates a coordinating role for second level schools in the county although activities in this area have been severely curtailed because of Covid in 2020.

The fact that Tadhg’s Dad, Mick Fennin, was the Referee Coordinator in Kildare for quite a number of years gave him an interest in Referee Education and he has responsibility for the programme in the county.  “I would coordinate the Go Games Referee Course which has been rolling out over the last number of years in Kildare. The idea is to provide referees for all the non- competitive Go Games in the county but we are also looking to help those who might want to get involved in the Referee Pathway in the county,” the Castlemitchell man added.

Every club is encouraged to provide Referees for the games and for the Programme. Who knows we might have a budding Seamus Aldridge, Howard or Brendan Cawley, the latest Kildare Referee making his way up the intercounty ranks.

Next week we look at the work of the other GDA’s in the county as well as that of the Games Promotions Officers.