Athy’s Eric Donovan is in the ring in Brussels tonight as he takes on Spanish based, Nicaraguan, Rafael Castillo, over six rounds and we wish him the Very Best of Luck for that.

This is the interview we carried with Eric in this week’s Kildare Nationalist.

By Pat Costello
IT IS one hundred and twelve days since Eric “Lilywhite Lightening” Donovan put in the performance of his life in front of the SKY TV cameras before he eventually succumbed in the Round 8 to Manchester’s Zelfa Barrett. 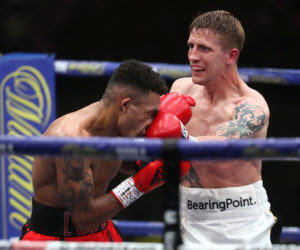 That loss put a dent in the Athy man’s professional record but a 12 -1 record is still very impressive as he faces Nicaraguan, Rafael Castillo on the undercard of the Wavre Boxing Night in Brussels on this Saturday night.
Donovan had impressed so much against Barrett that he was promised further bouts in front of the SKY TV cameras and indeed they were true to their word as he was offered a spot on the Conor Benn fight card last month but, in the end, had to turn it down because of a bout of flu.
Saturday night’s contest is seen as a warm up for bigger fight nights in 2021.
While he may not have been active in the ring in public O’Donovan has been busy preparing himself for further fights in his professional career. Kenneth Egan is still involved in his corner but O’Donovan is now also working under a new head coach in Packie Collins.
“You are only as good as your last fight and it was a loss and it was my first loss so that can be hard to take but my Manager and myself were of the view that I needed to get back in the ring as soon as possible because we wanted to get the last fight out of the system. I can be hard on myself and even though people say I boxed well in the last fight I can see loads of areas that I can improve on,” Donovan explained.
“Saturday’s fight is a “tune up” for bigger fights next year but you cannot take anything for granted in the ring. The fight will be over six rounds and I’m really looking forward. My opponent will be a tough durable opponent.”
“I’ve been working with my new Head Coach, Packie Collins, for the last two months. He’s a man of huge experience and he’s saying all the right things. He’s making a hell of a lot of sense when he talks to me about my performances. He’s not trying to change my style, my fundamentals of boxing, but his advice is that in a professional fight you have to be able to change tactics mid-flight,” Donovan added.
Both the Head Coach and the boxer felt that there was too much of the “sameness” in his armoury during the last fight which eventually led to his downfall. “Packie told me that I could have taken a round off at Rounds Six or Seven, regroup, tie him up. These are things I didn’t know how to do because I was so set in my amateur ways. That style takes a lot out of you if you were to go 10 rounds,” said the Athy man.
We’ll see a different Donovan in action on Saturday night with the rounds being managed better. “I’m sitting down a bit more, coming down off my toes, working on my defence, and feeling a bit more confident that I can avoid areas where I might have been exposed before. I feel good and I feel I’m making progress. Knowledge is key, Packie keeps telling me,” the Lilywhite Lightening said.
“I feel that where I am in my professional career now at 35 years of age, I’d be foolish if I didn’t bring in the know-how and experience that Packie offers. When I come up against a situation like I did in the last fight I have to make sure that I have made the adjustments inside and outside the ring,” O’Donovan tells us.
Although he doesn’t know much about his 28-year-old opponent, Castillo, from Chinandega, Nicaragua, Donovan says that doesn’t faze him because of his amateur days when opponents were not known until very late during various World or European competitions. Instead Donovan will be focussing on his own game to make sure he is in the best physical and mental state.
Even in the days immediately after his loss to Barrett in August Eric Donovan, while pleased with his performance up to a point, and pleased with the reaction to that performance, nevertheless he was already looking at the things that he thought caused him to lose the fight.
Talking to us here in the Kildare Nationalist over the last few days it is obvious that he has identified these issues through his own incisive reviews as well as through the voice of experience that Packie Collins offers to him and Kenny Egan inside and outside the ring.
This added asset has given the already confident Kildare man even further confidence to deliver a top professional performance.
We wish Eric all the best as he endeavours to end 2020 with a performance and a win that will set him up for bigger things in 2021 and beyond.