“IN the month of November on a cold stormy day…”. So begins the ballad “The Gallant John Joe”, which laments the sad passing at an early age of legendary Cavan footballer, John Joe O’Reilly, Cavan’s Millennium Man. John Joe, as he was widely known throughout Ireland, was one of the first great GAA national icons. He was the talisman and captain during Cavan’s golden era between the 1930s and 1950s. 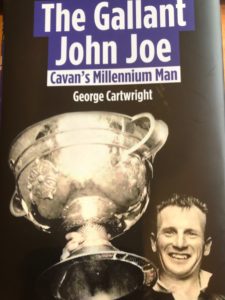 John Joe is the only man to lead a team to All Ireland glory outside of Ireland, when he led the Breffni men against Kerry in the 1947 final played at the Polo Grounds in New York. He also captained Cavan to another All-Ireland this time over Mayo in Croke Park the following year.

George Cartwright’s newly-published biography leaves no stone unturned in meticulously uncovering the life and times of ‘The Gallant John Joe’. The 288-page tome traces his growth from school boy to senior player, while also documenting his rise through the Army ranks before the tragedy of his untimely passing.

Like the famed John Joe before him, Cartwright came from the same famous Cornafean club and attended the same Corliss NS as the legendary sportsman. In later years Cornafean was to produce yet another famous Irish sportsperson in Catriona McKiernan, the Irish long-distance athlete.

The late John Joe O’Reilly was always described as a leader of men in the same way as another GAA great, the late Dermot Earley, was also described. It was fitting therefore that both men should give great service to the GAA, not only in their native Cavan and Roscommon respectively, but also to the GAA in Kildare. Both also served their county to the highest honour.

In the years that John Joe O’Reilly spent in Kildare he immersed himself in the Curragh and Kildare life. He and his wife, Olive, whom he married in 1943, lived in Kilcullen before moving to McDermott Barracks in the Curragh where they had four children, Breffni, Brian, Sarann and Alva. The O’Reillys did buy a farm of about 10 acres near Naas and built a house on it but unfortunately John Joe died before the house was finished.

The book tells the great story of the Kildare SFC Final of 1947 when the Curragh were to play Sarsfields on 14 September, the same day as Cavan were to play Kerry in the All-Ireland Final in the Polo Grounds, New York. “Would the Curragh be forced to play without John Joe, their captain and star player? Kildare County Board, with the cooperation of Sarsfields, willingly and sportingly agreed to reschedule the final to accommodate him.”

That’s where the generosity ended though as Sarsfields duly won the final on 5 October!

A similar dilemma would face another GAA great, Jack O’Shea, for Kerry and Leixlip in the 90’s.

During his time in Kildare John Joe became a noted referee, even though he was still playing and he also had stints training Moorefield and Ballymore Eustace.

As regards his untimely death the book says that it is generally believed that he received a kick in his side in a Kildare championship match in May 1952 and that he suffered kidney trouble as a consequence or that maybe an injury to the same area while playing for Cavan in 1948 might have started the complications.

John Joe O’Reilly was only 34 when he died and despite his young age, he left a lasting impression, not only in his native Cavan but also here in Kildare. A stand was named in his honour at the McDonagh Sports Grounds in the Curragh Camp in May 2008, which was attended by family and friends and by the Chief of Staff of the Defence Forces, Lieutenant General, Dermot Earley.

The book is published in hardback by Ballpoint Press and can be ordered from [email protected]. Farrell and Nephew in Newbridge, Gra, The Coffee Bar and Brian O’Reilly’s Pharmacy in Naas are currently taking orders for availability next week. It is also available on line through Kindle.

The Kildare Nationalist is giving away a copy of The Gallant John Joe – Cavan’s Millennium Man. To be in with a chance this prize tell us which county John Joe came from. Email your answer to [email protected] by 12 noon on this Friday, 11 December.