We caught up with Athy boxer, Eric Donovan following his victory in Brussels at the weekend:

ALTHOUGH the fight went the distance in Brussels on Saturday night, Eric Donovan duly won his first fight after his loss to Zelfa Barrett in August against the tough and durable Rafael Castillo, the 28-year-old Spanish based, Nicaraguan, who had done the same with the exciting Northern Irish boxer, James Tennyson on a previous occasion. 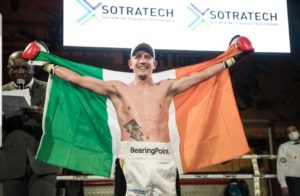 Donovan was always in control in this fight although he had to be careful not to be drawn in to a succour punch from his Central American born opponent. The win brings the Athy man to 13 wins in his professional career with only one loss.

Now the Lilywhite Lightening has set his sights firmly on 2021 and bigger fights with a crack at some title fights and to performing at home in Ireland with the ultimate dream of a fight in Kildare.

The fight was used by Donovan and his Management and Coaching teams as a warm up for more exciting fights in 2021 and to banish the memory of his only professional defeat in August.

Speaking to the Kildare Nationalist after the fight, Donovan, while extremely happy with the win, was his usual critical self. “It was a routine performance and a routine win but I didn’t feel the best and it wasn’t one of my better performances compared to my last fight. Maybe I wasn’t buzzing or up for the fight unlike the last time. There were no TV cameras or World Ranking title, I was just in a boxing gym in the backarse of a place in Wavre outside Brussels just to get back to winning ways.”

“My opponent had gone the distance with a lot of good fighters. I tried some of the things I had been working on with my new Coach Packie Collins and I pulled them off and that was good which gave me good reassurance going forward,” he explained.

“I started a little bit slow; it took me a while to get into my flow. I kind of got going in the third round and I started landing some good shots and finding my rhythm and my distance really well and in the sixth and final round I was catching him with heavy punches. I was about to go for the knockout about a minute into the round when he threw out a jab and caught me with his thumb in my eye,” he added.

“I couldn’t see properly for about 30 secs so I made a mature decision not to do anything silly. It was playing on my mind that if I lost this fight that would probably be the end of my professional career there and then.”

Donovan saw 2020 as being a good year in terms of profile and getting the opportunities to box on SKY TV which opened doors to a whole new audience, a whole new fan base. He brought in a new Manger in Mark Dunlop and a new Head Coach in Packie Collins, as he says, “to make all of the adjustments inside and outside the ring to tee me up for hopefully a successful 2021.”

“My dream for 2021 would be to work my way into a European title shot or a World Continental title and maybe entice RTE back into it. It would be a dream come through to box in front of my home crowd. My last five fights have been in London, Glasgow, Belfast, London and now Brussels. My ultimate dream would be to fight in Kildare but I don’t think we have the venues for that.

First up though is his son’s First Communion on Friday, then about 10 days off “before getting back into it and start working towards getting better and better. I may be 35 years of age but I can see loads of areas I can improve on. I’m willing to make big sacrifices. I know time is running out for me so I want to seize every opportunity. I’m going to get back to feather weight and there is a big fight for me there at that weight. A show in the Belfast Arena with James Tennyson, Tommy McCarthy and myself would be a massive show,” Eric concludes enthusiastically.

Wherever the venue, whatever the fight, we are all looking forward to Eric Lilywhite Lightening Donovan in the ring in 2021.