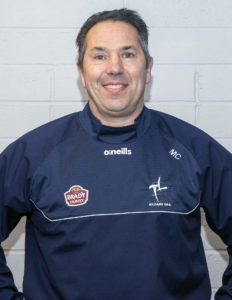 The team contains players from twelve different clubs in the county. Included in the team is Conn Kehoe and he is also likely to feature with the hurlers against Offaly on Sunday.

The starting fifteen is as follows:

Earlier this week we caught up with new Kildare Minor Manager, Micheal Conneff and we included his interview in this week’s Kildare Nationalist:

THERE was a big surprise last week with the announcement that the GAA U20 and Minor Hurling and Football Championships were to resume and the news was greeted with delight by new Kildare Minor Football Manager, Micheal Conneff, the former stalwart defender on the great Clane team of the 90’s.

Kildare will now take on Louth in the Electric Ireland Minor Football Quarter Final in St Conleth’s Park on this Saturday with a 12.30pm throw-in.

“We just got news on Tuesday that we were going to be back so it’s great as there was talk of it being deferred to next year. We were just about ready to go in March when the first lockdown came and that was repeated a second time in October so this is our third time to get ready for the game. We have to hope for the best for next Saturday now,” the Manager said.

“We have a great bunch of players. During the first lockdown we set little challenges for them, like 5k’s and other little tasks from week to week. We were able to monitor them easily and then in the last lockdown we would have given them sessions to do. There is a huge element of fitness among the players now as they have been four years in this development squad so they weren’t going to let their fitness levels slip away easily,” Conneff added.

Looking forward to Saturday’s Quarter Final against the Wee County Kildare have a few injury concerns. “We have a panel of 31 but we do have a number of injuries,” the former Clane defender explained. “The game is more physical at this time of the year compared to summer football so players are going to take more knocks with the heavier ground so we just have to be prepared for that. We only have had 5/6 training sessions but I’m sure Louth will be exactly the same.”

There is a wide spread of clubs represented of the 2020 Minor panel including players from what might be called the smaller clubs. Although this is Conneff’s first year as Minor Manger he has been with this group of players since they were in the U14 Development Squad. His Management Team included John O’Dwyer from Naas, who looks after Strength and Conditioning as well as being a selector, Mark Fogarty, from Allenwood, David Jordan from Leixlip and John Conway from Ballymore Eustace. “We also get a huge amount of support and help from Johnny Doyle,” Conneff added.

Looking at the opposition the Manager said, “Louth kicked 15 points against Wexford with one player kicking seven of those points. They play a nice brand of with a couple of really good forwards and they are strong around the middle.”

“We have a great bunch of players and they have bounced back twice already so I’d be very hopeful and confident that we will get a good performance out of them on Saturday. We are in a good place,” he concluded.