The report below by our Reporter, Ian Baker, on Kildare’s victory in the Electric Ireland Leinster Minor Football Championship appears in this week’s Kildare Nationalist, out now.

DESPITE starting cautiously, Kildare’s solid defensive effort and a slow-burn forward line put them in a Leinster Minor Football Championship semi-final against Offaly after they defeated Louth on in the Quarter Final in St Conleth’s on Saturday. 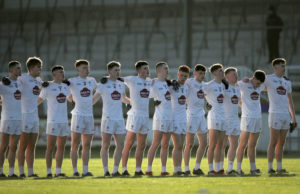 The Kildare team stands for the national anthem prior to the match against Louth Photo: ©INPHO

Praising his defence after the game Kildare manager Micheál Conneff spoke of a Louth team that “looked like they were going to trouble us after the first couple of attacks, but then our defence got completely on top.”

Prominent on the winning of the game, it was Kildare’s strong rear bulwark that provided a confident platform for the victory that setup a Leinster semi-final against the Faithful County on Saturday next, 19 December also in St. Conleth’s with a 12.30pm start.

While nerves hampered Kildare in the opening minutes on Saturday, their defence kept Louth to three first-half frees and 1-1 from play in the second-half. Such a defensive display offered the full-forward line of Adam Fanning, Daragh Sloane and Oisin O’Sullivan time to find their feet and the posts.

While Louth relied on Tom Mathews and Kyle McElroy, goals from Sloane and Fionn O’Giollain kept Louth at arm’s length after Kildare levelled the game in the 24th minute. Scoring 1-7 between the 24th and 36th minutes and keeping Louth to one free showed the capability of the Kildare forwards and the meanness of the defence.

Kildare appeared to the settle quickly through Ben Fitzsimons and a 3rd minute point, but the weight of the Kildare jersey hung heavy on many players’ decisions.

Kildare waited fifteen minutes for a second score, McElroy’s third free gave Louth the perfect start by the 12th minute, and we wondered whether the Covid breaks left a more debilitating effect on Kildare.

Trailing 0-3 to 0-1 in the 16th minute, Kildare registered six wides, despite retaining a larger proportion of the possession through midfielders, Conn Kehoe and Conor Lonergan.

As is becoming a feature of games with a water break, once Conneff and mentor, Johnny Doyle instilled calm and simplified the instructions, Kildare leapt from the traps and on the road to victory.

As the game developed, Kildare showed their potency in moving the ball quickly from defence to attack. Starting with either corner-back, Kildare transitioned through centre-back James McGrath to the dangermen in the forward line.

The nervous green shoots that we saw initially in the game matured as Kildare soon hit their stride. A scoring rate of 1-6 without reply put Kildare in a commanding lead. Daragh Swords and Adam Fanning levelled the game by the 24th minute and confidence seemed to suddenly flow through Kildare.

Swords’ second point coming from an Oisin O’Sullivan pass that should have been cleared by Louth might have ended in the net, but Kildare settled for the lead for the first time since the 3rd minute of the game.

The Lilywhites soon had the ball in the net when dual player, Conn Kehoe thunderous defensive shoulder setup a move whereby full-forward Daragh Sloane slotted from the close range after a blistering transition phase.

Leading 1-4 – 0-3 and keeping Louth scoreless would have been enough for Kildare scoring just three points in twenty-four minutes and registering eight wides, but Kildare sensed blood. A third Fanning free and an O’Sullivan point gave Kildare a 1-7 – 0-3 half-time lead.

Louth begun their second-half with a fourth free, this time from Tom Mathews and with barest wind advantage behind them, their energetic intent signalled a revival.

But Kildare hit their visitors with three successive points from substitute Shane Farrell, O’Sullivan and Fanning, giving them a 1-10 – 0-4 lead in the 36th minute.

Kildare looked like they were running away with the game at this early stage in the second-half, but Louth scored one of their two scores from play. Getting in behind in the Kildare defence, Mathews added to his earlier point with a 37th minute goal that put the cat amongst the pigeons. Or at least it should have.

O’Sullivan’s third from play and Fanning’s fifth point gave Kildare a handsome 2-13 to 1-4 lead at the third-quarter water break.

As the substitutes were let loose on the game, the shape began to fray, and the competitive edge ebbed to a fait accompli that Kildare were to progress. Louth’s Mathews and McElroy added fifth and sixth frees late in the game, but Kildare’s defensive effort was exemplified by McElroy scoring Louth’s only point from play eight minutes into injury-time.

Kildare rounded off their performance with Cian Grimes, O’Sullivan and Charlie Litton adding substantial momentum in their bid to reclaim their Minor Provincial title.