JESSICA Harrington supplied Kerry jockey, Paddy Kennedy, with his first Graded-race success when Ashdale Bob won the Grade 2 BetVictor Novice Hurdle at Navan on Friday. The 14/1 chance raced to a six-length victory over the Jack Kennedy-ridden 6/1 shot Fakiera and the winning rider reported, “He’s a nice horse, he improved a good bit from the last day and I think he’ll improve again on a bit of nicer ground. That was a bit on the dead side for him. He’ll jump a fence too and I’d say chasing is his real game. A step up to three miles would be no bother to him. Everything from two-and-a-half to three he’d be fine.” 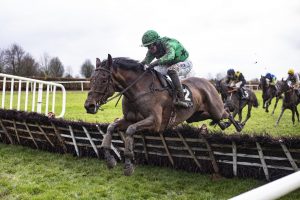 At the beginning of the week, Barry Connell was on the scoresheet once again when Espanito Bello ran away with the beginners’ chase at Naas on Monday. A 12/1 chance under Mark Bolger, the six-year-old hardly put a foot wrong as he raced to an 18-length success over the Gordon Elliott-trained Coko Beach with a gap of 22 lengths back to the third-placed Longhouse Poet, trained by Martin Brassil. He’s set to return to Naas early in the New Year for a Grade 3 novice chase.

He sent out three winners at the track five days earlier and Michael Halford was back in the winners’ enclosure at Dundalk on Wednesday where he landed the opening 5f handicap with Hood’s Girl. Owned by the Rocky Horror Partnership, the 20/1 chance was never far off the pace under Mikey Sheehy and readily got the better of 13/8 favourite Woodrow by a length and three-parts. Gary Carroll had an easy enough time of it on the Tom Gibney-trained Hannon which landed the 2m handicap by a length and three-parts from Joseph O’Brien’s Scholastic. The 100/30 chance was a second winner on the day for owner Derek Kierans.

Oliver McKiernan and Gavin Brouder were winners at Down Royal on Thursday where Kristian Goingwell scored a ready success in the 2m4f handicap chase. The strong 100/30 favourite was eased down close to the line as he beat the Tom Gibney-trained Peterstown by a length and half in the colours of the Keep The Faith Syndicate.

Willie McCreery was the first Kildare trainer to visit the winners’ enclosure at Dundalk on Friday. He gave Billy Lee his second winner of the week when Morning Approach took the 7f maiden by half a length from the Jessica Harrington-trained Brosna Empress at odds of 8/1. Johnny Levins was next into the number one spot after the Epitome Racing-owned Prisoner’s Dilemma scored a battling success in the opening division of the handicap over the same distance. Under Donagh O’Connor, the 7/2 joint-favourite won by a head from the Tom Cleary-trained Dark Magic. Two days after finishing runner-up at the track, Foreign Legion won the second division of the 7f handicap at Dundalk on Friday night. Ross Coakley was in the saddle as the John Larkin-trained five-year-old raced to a two and a half-length win over the Michael Halford-trained Katiymann. Rathangan trainer Niall Egan took the 8f maiden with the Niall McCullagh-ridden Wonder Elzaam. The 2/1 favourite dug deep to hold off his main market rival Mosala, an 11/4 chance, by a head after a near miss at the venue a week previously.