UNDERAGE soccer in Kildare is about to get a major boost as the Kildare and District Underage League Academy have submitted an application to build a full sized, floodlit, All Weather pitch in the grounds of Killashee House Hotel, just outside Naas. 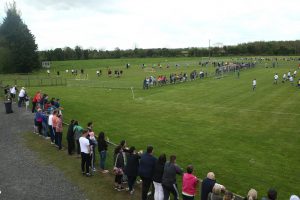 It is envisaged the Klub Kildare will play their National League games on the pitch while it will also be used for boys and girls of the KDUL representative teams, and Academy training during poor weather conditions. The League may play cup finals and various other matches at the venue also.

Klub Kildare currently competes in the SSE Airtricity Under 13 and Under 15 National Leagues and will have a team at Under 17 level next season as well, commencing March 2021.

Klub Kildare teams currently train and play at the KDUL base in Tougher Park but while the Tougher Park playing surface is the envy of many visiting teams during the summer months it is virtually unplayable for six months of the year and the KDUL and Klub Kildare have the added expense of renting pitches during this time.

The Kildare and District Underage League Academy is already in receipt of a Sports Capital Grant for the installation of an All-weather pitch with floodlights that would accommodate the increasing numbers, as well as their long-held desire for a floodlit all-weather surface, but a location was needed to draw down the funds.

This dilemma led to discussions between Pat McNally, KDUL President and Klub Kildare secretary, with Mr Michael McElligott, owner of Killashee Hotel, over the new proposal and an agreement was reached recently.

“We have our own facilities in Tougher Park but it has been a long-held ambition of ours to build a floodlit all-weather pitch for the KDUL. The success and continued growth of Klub Kildare at National League level only increased our need for such a pitch,” said McNally.

“We had the grant and the desire to build the pitch, along with the need for it, but what we didn’t have was a suitable location. We are so pleased to have reached an agreement to enter a partnership with Mr. McElligott and Killashee House Hotel,” he added.

“It would not have been possible without Mr. McElligott sharing our vision of providing the best possible facilities for the current and future generations of young soccer players in Kildare. This pitch will allow us play and train on an immaculate surface, day and night, right throughout the year. It will offer us a facility that is the equal, if not better, than the rest of Klub Kildare’s counterparts in the underage National League and for the younger players, it will give them the best chance of maximising their potential, Mr McNally continued.

“We have around 250 players in the Academy, between boys and girls, and the addition of an all- weather pitch helps players right around Kildare and the surrounding areas to a see a pathway to National League football on their doorstep. The days of young players having to leave the county to play on top-class all-weather pitches and at the highest level are in the past now.”

“The KDUL, the League’s Academy and Klub Kildare are indebted to Mr. McElligott and Killashee House Hotel for their help in delivering this facility and it will certainly help take the teams and players onto a new level,” McNally concluded.

Michael McElligott, owner of Killashee House Hotel is delighted to be involved with the initiative.

“I am very pleased to be in a position to assist both the KDUL Academy and the National League side, Klub Kildare. I have been very impressed with the great work being done by both the Academy and Klub Kildare with the development of players and for their vision of how they should progress in the future,” he said.

When the initiative was proposed, I was only too glad that the Killashee House Hotel could help in providing these facilities that will motivate and inspire young soccer players in Kildare for many years to come. We see it as a mutually beneficial partnership and the Killashee House Hotel is delighted to be associated with one of the best soccer academies in Ireland,” Mr McElligott concluded