Our Report, by Richard Commins, on Kildare’s exit from the Electric Ireland MFC appears in this week’s Kildare Nationalist, out now.

Kildare underage teams have a lot to live up to these days and sadly the 2020 minors were unable to replicate the achievements of their predecessors on Sunday as they made their exit from the Leinster Championship at the semi-final stage in Newbridge. 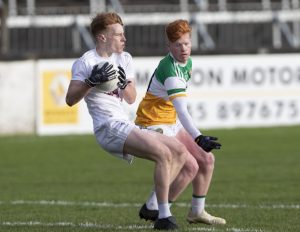 It was only the second time in nine years that our minor team has failed to reach a Leinster final and a three-point margin scarcely did justice to a far superior Offaly team who were recording their first win over the Lilywhites at minor level since 2007.

In hindsight Kildare may have suffered having had a relatively comfortable passage to this stage against Louth last week while Offaly had to dig out a win against a dogged Wicklow.

Kildare made four changes from the team that beat Louth comfortably and this may have been disruptive but Conneff felt that with the lack of games this year it was only fair to reward players who were doing well in training.

Offaly laid the foundation for victory in a thoroughly dominant first half when they cleaned Kildare out at midfield both from kick-outs and general play. A lively full-forward trio caused all sorts of problems to the Kildare backline but in truth that dominance was evident in all lines of the pitch and Kildare did not mix their kick-out enough to try to negate the Faithful’s superiority in the middle.

When Offaly’s second goal went in just before the half-hour mark it looked like it could get very messy for Micheál Conneff’s charges as they trailed at that stage by ten points (2-6 to 0-2) but they improved to a degree thereafter and two excellent Oisín O’Sullivan goals gave the scoreboard a more flattering look.

Clane men O’Sullivan and Adam Fanning were the only Kildare forwards to make any impact against a solid Offaly defence augmented by a sweeper. O’Sullivan, younger brother of Shane, opened Kildare’s account with a fine point before Offaly took complete control.

Kildare struggled to contain the direct running of the Offaly forwards and had to resort to fouling far too often, Offaly’s first three points coming from that route. Jamie Guing levelled for them on 4 minutes and put them ahead five minutes later.

Keith O’Neill, whose run up seems to involve a minor de-tour to Clonbullogue got off the mark with a free to the left and Kildare must have been grateful for the water break at 0-3 to 0-1.

A long ball from Conor Lonergan set up Fanning to score the Lilywhites’ second point but Offaly really got in their stride with O’Neill and midfielder John Furlong – grandson of the great goalkeeper Martin – firing over excellent points as Kildare continued to struggle to gain any foothold on the game.

On 24 minutes, disaster struck Kildare as full-back Elliot Byrne lost possession on a sortie to midfield and the resultant Offaly attack saw their dangerous corner forward Cormac Egan weave through and although his shot was parried by goalkeeper Cormac Barker, two Offaly players were lined up to palm it into the net with centre-back Cathal Ryan applying the finish.

That put Kildare six behind and five minutes later that had stretched to ten. Guing pointed after winning a mark and then the defence parted again to allow O’Neill to drift in and finish to the net to Barker’s right.

It was no more than Offaly deserved at that stage, particularly when you consider the five wides they had shot as well as another off the post. Kildare needed a goal quickly to stem the tide and give them some hope and O’Sullivan provided it with a thundering finish from a narrow angle after fetching a miscued point attempt from Shane Farrell over the head of Offaly full-back Tom Hyland.

Conneff made two half-time changes with Daragh Sloane and Luke Killian coming in and the third quarter was competitive but low scoring, with Offaly still looking solid but Kildare working harder.

Fanning pointed a free two minutes into the half before an Egan run and point got Offaly moving again. Ryan then added to his goal with a brilliant point from play for the Faithful before Fanning’s free sent the teams in at the second water break with six points between them still.

At times Offaly seemed too intent to go for goal and that lack of pragmatism allowed Kildare to keep in the game. When O’Sullivan scored a point from play and substitute Ben Fitzsimons effort was touched over the bar by goalkeeper David Dunican, Kildare had narrowed the gap to four points (1-7 to 2-8) without ever really playing well.

The home side’s hopes suffered a huge blow, however, when captain Byrne was black carded for a pull-down on the excellent Egan. Although O’Neill missed the relatively straight-forward free, Guing eased any pressure on the Faithful with a point from play and then Pauric Robbins fired over an inspirational point with his left foot from the stand side.

A long ball in from Sloane paved the way for O’Sullivan to fire home another superb goal as the game headed into injury time but Offaly weathered that and managed the game superbly to the final whistle, the three-point gap flattering the losers somewhat.