We feature an interview with Kildare Hurling Goalkeeper, Paddy McKenna, in this week’s Kildare Nationalist, out now.

IT was the Tuesday before the Christy Ring Final that regular Kildare senior hurling goalkeeper, Clane’s Paddy McKenna, realised that illness would prevent him from taking his place between the posts in Croke Park. “I rang Paul Dermody (Goalkeeper Coach) and David Herity (Manager) and they decided to give me as much time as possible to recover but I think Mark Doyle (Replacement Keeper) began thinking that he was in the frame for the Sunday,” Paddy remembers. 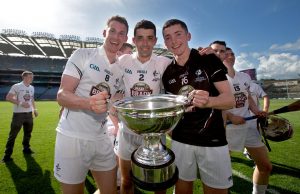 “Obviously one part of me was devastated to be missing out but I was still involved in the lead up to the game, remotely, and I was able to reach out to the lads and keep them on their toes. I talked to Mark regularly during the week. Yeah, it was tough to miss out but I still felt that I had a part to play so that helped a bit,” he added.

What sort of advice did he have for his replacement and Clane clubmate, Mark Doyle, in the run up to the game, we asked?

“It was just about doing the simple things for Mark. He’s a very good goalkeeper in his own right as I know as I can’t get my game in goal with Clane from him. David (Herity) wouldn’t have put him into the situation if he didn’t think he was good enough nor would he be involved if that was the case. It was great to see him go out and do the business and especially for our club, Clane, as we had four lads involved. There was nothing major that I said to Mark in the lead up to game; play his own game and he certainly did,” the Clane custodian explained.

McKenna also knew that Doyle had long-serving full back, John Doran, in front of him and that would be of enormous help to him. “John was a huge help to me when I started getting game time in 2018 and in the couple of years leading up to when I had some games in the League. He’s so reassuring and so helpful. Everything that has been said about him in the past few weeks and about the type of person that he is was so true,” added the man who was Christy Ring Player of the Year in 2018.

Paddy’s family are huge supporters of both club and county hurling in Kildare. “My Mam and Dad and two sisters follow me all around the place and they have been very helpful to me in my career. They were sickened for me as much as I was for myself when they knew I wasn’t going to be involved in the Final. But they know Mark and they knew what his parents were going through. I think they met them by chance in Clane one day leading up to the game so that was helpful to them but it was still a tough one for them,” he said.

“I watched the game with my girlfriend, Ciara, and I now know what my family feels like when they’re watching me playing. My heart was in my mouth knowing that I had no influence on the game. It’s the first time that I had to watch from afar with no contact with Management or selectors or players. It’s very strange and something I don’t want to get used to just yet,” he laughs.

Paddy McKenna says he was never really attracted to an outfield position and would always turn up for training in the Kildare goalkeeper’s black jersey. “Maybe I wasn’t good enough to play outfield so they just put me in goals,” he laughs. “But obviously when I was growing up in the mid 90’s there were great goalkeepers like Davy Fitz, Damien Fitzhenry, Brendan Cummins, Donal Og, even James McGarry of Kilkenny, and I’d look at the Sunday game and watch their performances and I’d think I wouldn’t mind being like that when I grew up,” he remembers.

McKenna took a lot of positives from 2020 even though the “the League campaign didn’t go as planned and not getting out of Div 2B would be a sore point.” The Run for Rory Fundraiser over the June Bank Holiday bought us together a small bit. 44 people participated in that event over 40 hours and we absolutely smashed the target that we had set. The response from the Kildare public was a huge boost to us as we are not as well-known as the footballers. I met with Rory and his family a few weeks ago with the Christy Ring Cup and they were very thankful.”

This event along with a competitive club championship gave the players a great buzz and left them chomping at the bit come Christy Ring Cup time according to the All-Star Goalkeeper.

He believes that Manager David Herity “had definitely the best possible hand that he could have this year. Ronan (McWilliams) has the wealth of knowledge on different players and different teams. I don’t know how he does it. Deckie (O’Toole) does a lot of his work behind the scenes and you can go to him or Richie Hogan, our kitman, with any issue or any question and they will both sort it out for you.”

“Then there’s Dermo (Paul Dermody) He just brings a wealth of knowledge of what it’s like to hurl with Kildare. If you’re looking for an inspirational speaker when times are tough or before a big game then Dermo is your man. I have been fortunate in being in dressingroms, whether it was with the school or Kildare U21’s or senior teams and he’d make the hair stand on back of your neck,” enthuses McKenna.

“Listening to Declan Hannon’s speech after the All Ireland and there’s 21 backroom staff there; that’s a different operation. A lot comes down to what the Manager wants. If John Kiely thinks that’s what he needs to get the best out of his players then so be it but for Kildare what David Herity has set up suits at the moment,” he adds.

McKenna recalls with fondness his 14 years involvement with the now Goalkeeping Coach, Paul Dermody, which started in Secondary School in Clane in 2007 where the former county keeper teaches. “He shaped Mark and I into the keepers that we are. There were times Paul would take us out of the odd class when he knew we weren’t up to much with the study and he’d do a goalkeeping session with us instead.”

“Sean Christanseen and I had him for English in 6th class and then we’d go training with him with the Kildare senior hurlers after study. No, we didn’t have to call him “Sir”; it was mainly “Paul”. He made our English classes more of a hurling class, and I remember going into class with a smile on my face knowing there would be a bit of craic,” the former student says of his mentor.

Looking forward to 2021 the Goalkeeper says the No 1 priority must be to get promotion from Division 2B of the Allianz League. “The quality of teams that we will face there isn’t going to be the same that we will face in the Joe McDonagh Cup so we are going to have to take as much as we can out of it. I wouldn’t be one for going into the Joe McDonagh just to fulfil fixtures. There are teams there that we shouldn’t fear, we’ve come up against them in all age groups. They might have tipped on ahead of us in the last couple of years but we should be pushing to get a couple of wins and cement our place for 2022,” he warns.

Off the field all is good with the Account Representative with Enterprise Rent a Car as he settles in to life with his girlfriend Ciara. I’m keeping busy at the moment. My sister, Siobhan, got married in October; it was originally set it for July and but had to postponed because of Covid-19 so there were only 25 at the wedding. I’m down the pecking order in the marriage stakes; my other sister can go before me. There’s no rush in Ciara and myself,” the affable McKenna laughs.