Leader For Club And County

In the first of our two-part exclusive interview with Athy and Kildare captain, David Hyland, we talk club championship, lockdown and his hopes for the future. 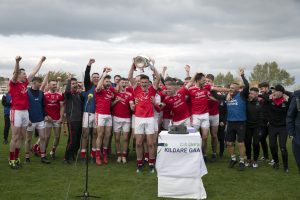 Pat Costello: How will you reflect on the year 2020, David?

David Hyland: It was a huge honour for me to be named captain of the Kildare team. Going into the year I was probably a bit sceptical in that I was probably a key figure for Cian O’Neill so there would be those doubts at the back of your head if you are still going to be a prominent figure with Jack (O’Connor). Then when he picked me as captain I was over the moon. It was something my family was very proud of so that was a great start to the year.

Obviously Covid kinda shut things down for a while. We were training away with no ends to a means but the club championship was huge proud moment for me when I was able to lift the Cup on behalf of Athy and with mates that I grew up.

PC: If you look back at the Allianz League Kildare seemed to be under pressure early on, it was really only in the Laois game that things started to pick up.

DH: Yeah, it does take time. Jack only came in November so he was trying to pick his best team. In our first four matches there was quite a variation in personnel. We were also missing some key players around that time like Aaron Masterson, Fergal Conway and others so we were only finding our feet. The match against Laois focussed us as we are such close neighbours. That got us back on the right track. It was disappointing that Covid came along then and we couldn’t build on that.

PC: How did the county team cope as a squad during that initial national lockdown?

DH: In fairness the Backroom Team and the Management Team looked after all the different elements for the squad. You could see Ross Dunphy, our S&C Coach, coming to the fore. He had programmes out to the players within a week for lads to do individually or in little pods such as Kevin Feeley, Paschal Connell, Niall Kelly and myself. Then we had our nutritionist, Gary, Rob McCabe from a Physio perspective and they were all on the ball. There was a lot of accountability on the players as the Managers didn’t have the usual oversight but it was good to have those structures in place.

PC: Getting back into club action seemed to be a new lease of life for every player.

DH: Yeah, it was stripped back to the bare bones so you weren’t necessarily in meetings for 40 minutes or anything like that. People were so long away from football that their main focus was more of enjoyment. Football was a medium for people to enjoy, to be able to meet your friends as you couldn’t meet them for a drink or for a coffee. Football therefore brought lads together is probably the best way to put it.

PC: It has been said that Athy probably came of age in the Group match against Clane where you dug deep and won in injury time.

DH:  It was a game in which we didn’t play particularly well but we showed great character. At the second water-break we were five points down and we were still behind going into injury time but we ground out the victory. As regards coming of age I think that game kinda gave us a new lease of life and a bit of belief as well knowing we could come out of those situations but coming of age probably came in the Towers game in the first half when we put a real statement down and that was probably the game that swung our season.

PC: Looking at the County Final then, you were underdogs but you seemed to be in control without being able to put it away for a long time.

DH: It was peculiar game in that usually when we played Moorefield in the past, we played well in parts but we didn’t come out with the right result. I thought we didn’t play particularly well in the Final. We could have easily gone in at half time maybe six or seven points up but we only went in a point or two up.  We were probably questioning ourselves if it was to be our day. Even Niall (Kelly) had the better of his man but kicked a few uncharacteristic wides. Then he went off in the second half and that brought more questions on ourselves but the strength of the panel came to the fore then.

PC: What was going through your mind when that last ball was dropping in towards the Athy goalmouth in the last seconds and suddenly Mick Foley was under it?

DH: I was running back marking someone so I didn’t see much of it in real time but it was a fitting way to win the game. Mick had been such a yardstick for Kildare and Athy over the years and then he was able to dig us out of a hole in the same way as he had done in the whole 60/70 minutes of the game.

PC: It seemed to be an emotional victory for Athy with tears in the eyes of players and mentors alike.

DH: Well, I supposed we had been questioned a lot throughout the years and it would be said that we were a one season wonder. So, we came of age and were able to put that to bed. A second element was that the club as a whole lost a few key characters. John Anderson, Matthew’s father, Jody Fennelly, Billy Owens as well who would have been three people, along with a lot of others who had passed away over the last few years who would have been a key driver for us in the run up to the Final.

PC: The fact that there were no supporters present, did that impact on the emotions too?

DH: Yeah definitely. You want to be able to embraced by your parents, by your family, by the community. You want to go and have a party to celebrate the victory. It was very special for me though when my Mam and Dad were coming across the pitch and I was able to hug them and I got to enjoy that moment with them.

PC: How is life treating you off the pitch, David?

DH: To be honest with you, Pat, in the first lockdown I was probably struggling a bit. I was getting up at eight o’clock in the morning and I was probably working through lunch and working until about seven o’clock in the evening. You might just say ah, I’ll send another email to tee me up for tomorrow and then you look at the clock and it’s suddenly eight o’clock. It probably got into a kind of vicious cycle.

Then family wise as well my brother, Paul, is home from Australia so we’re all kind of at home and Kieran is home from New Zealand so the five of us are here now in the house. When you look at it holistically every cloud has a silver lining in that you give yourself that bit more. It routes you back to your square roots and you see what you actually value in life, which is good.

DH: Short answer, to win silverware for Kildare and to build on that with Athy as I think we have the capability to go and do that and I’m looking forward to getting back into it in January.

The second part of our David Hyland interview, when he discusses Kildare, the Meath game and facing the Dubs, appears in next week’s Kildare Nationalist, out on Tuesday, 5 January.