There was great news for St Brigid’s Boxing Club, Kildare town and their pride and joy, Katelynn Phelan, ahead of her fight in Spain at the end of the month when it was announced that the 20 year old had been voted Irish Fighter of the Year for 2020 in www.irish-boxing.com‘s annual end-of-year awards. 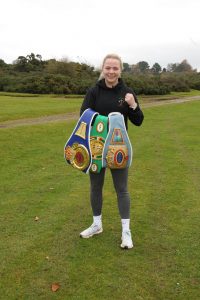 The triple World champion beat 2018 and 2019 winner, Katie Taylor, into second place in the 2020 vote. Along with Taylor, Phelan, who is coached by her father, Paddy, in St Brigid’s BC and Niall Barrett in Unit 3 Health and Fitness in Naas, beat off other “challengers” including Belfast cruiserweight, Tommy McCarthy, Lisburn’s exciting prospect, James Tennyson and Olympian, Brendan Irvine.

It was Phelan’s sensational victory over her German opponent, Jessica Schadko, in her own backyard in October, from which she picked up three World titles, which surely swung the Award in her favour.

A dispute which forced St Brigid’s BC out of the premises recently has been resolved for the time being anyhow.

Phelan will now top the bill on the Celtic Clash 11 Card in Murcia in Spain on 23 January but her fervent wish is to headline a bill in Ireland.