In the Kildare Nationalist this week we carry the second part of our extensive interview with Athy and Kildare captain, David Hyland;  we look back at Kildare’s championship and dealing with the Dubs. David takes up the conversation as we discuss the resumption of the Allianz League in October: 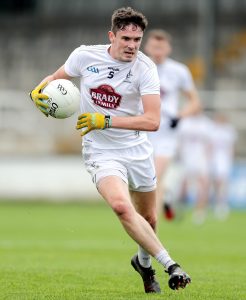 DH: Strangely enough relegation was never talked about and I think lads were just happy to be able to play a bit of ball together and step it up a level so there was a nice bit of freshness there with a few new faces. The lads were really looking to actually performing well so there was no talk of the two points. We were aware of the implications in the back of our heads but strangely enough it wasn’t really talked about. The games against Cavan and Westmeath were very much different. Cavan played a lot more openly that we had expected. I remember the guys inside like Jimmy (Hyland) and Darragh Kirwan were getting free a lot so it was a very much a free-flowing game. In the Westmeath game then we knew they would set up very defensively but I think we played very well defensively that day. So, coming out of the League there were a lot of positives and we were happy with a lot of things.

PC: Looking at the championship then is it a fault or a problem in the Kildare team the lack of goals at one end and the concession of goals at the other?

DH: On the concession of goals, I know there were a few against Meath obviously but before that I think we went seven games without conceding a goal so I would strongly challenge that view. I think the source of a lot of Offaly attacks were our kick-out set-up as we didn’t really close down their short kick outs. That gave them a platform to build. In the Meath game in my time with Kildare I’m not sure that we have put in such a complete performance as that first half against Meath. I remember coming in at half time and Ben McCormack, who wouldn’t normally talk a lot, saying he was very comfortable with what we were doing. The tackling was immense, the intimidation of Meath and the aggression in going after the ball was unbelievable. Then in the second half I know we did concede five goals but some of them you just can’t account for. Some were just individual mistakes that lads will never do again but those mistakes happened to be on our 14 yard or 21yard line. Those moments are zapping moments but what killed us even more was that we had four attacks after the first three goals and we got turned over or kicked the ball wide. So, for the goals that there were getting we weren’t even securing a point the far end so that zapped the team further. I definitely don’t think we’re eight points worse than Meath. I know people will probably challenge me but I definitely think we’re a better team than that.

PC: Is there a feeling among the players that there is a mental block in relation to Croke Park or is this something that is perceived by those outside the team?

DH: To be honest I can’t buy into that Croke Park is a hoodoo for Kildare, I just don’t buy into it. As a young lad all you wanted to do was to play in Croke Park and that’s the vibe I was getting off the lads when were togging out against Meath and even looking at the first half, I’d say no one was questioning a hoodoo then. It’s an easy one to throw the book at us when we get beaten.

PC: What was the feeling coming out of Croke Park after the Meath defeat, you had a huge chance to play Dublin in a final?

DH: Oh yeah it was a terrible sinking feeling. I remember coming out, I didn’t even get food afterwards and I was driving down the motorway to Athy and I was thinking it was just a huge missed opportunity. I wouldn’t have minded as much if we had been flat the whole game and we had conceded the five goals over the two halves. I thought we were in such control in the first half and the communication and the aggression and game management we were showing was very high up with any team in the country and then to let all that work be undone was such a sinking feeling.

PC: Does it make you more determined for next year?

DH: It does and it gives you that bit of hope as well that we can hang on to that first half against Meath and those two games against Cavan and Westmeath. If you think about it we couldn’t get much blocks of conditioning in or time together as a team as I said I only got 10 days together with the team and then with Kildare in a lockdown as well and the club championships were pushed back so we probably got a bit less than other teams. There are definitely areas for improvement. Even after the Offaly game I saw Christine (Murray, former County PRO) taking a picture of seven lads who had just made their debuts so a lot of young lads got blooded in there and that has to be a positive and I think Jack has his eye on a few more so those fresh faces will be welcomed as well.

PC: The retirement of Peter Kelly, David Slattery, Tommy Moolick, Keith Cribbin and Johnny Byrne leaves a big hole to fill but a huge opportunity for someone to fill it.

DH: Those lads that you mentioned, Pat, are very genuine and good lads as well that I would personally call friends. It is a big hole to fill not just for the football but for going in and having the craic with those lads. Those are the kind of lads that you go to training to have the bit of craic with and hang out with as well as just being on a football pitch but I suppose it’s a march of time as well. It’s going to be me one day. We all can’t play intercounty football for 15/20 years but I’ve seen enough good young lads coming through there like those I mentioned previously, like Con Kavanagh, Darragh Kirwan, Shea Ryan and Liam Power.  Jimmy Hyland is really coming to the fore so there are a lot of positives there as well. I don’t see any reason why there can’t be three or four more new finds again next year to bring us into the League.

PC: Those lads who retired were all in their late 20’s, the same age as many of those who won with Kildare in ’98. Is it getting harder to play beyond the age of 28/29/30 with the constant training and playing at intercounty level?

DH: If you look at the majority of those guys, who retired, we’re saying that these guys are playing with Kildare for 10 years but in fact they have also played in Development Squads so you’re probably looking at about 14 or 15 years in totality and if you accumulate the type of sacrifices that those guys made it’s not just going down to the pub with a few of your friends, it’s 24/7 athlete mentality. Am I going to have a crisp sandwich here or am I going to have a healthy meal? There are a lot of those things in the background, unseen sacrifices. Anyone can turn up for training five or six times a week but it’s all of those types of individual sacrifices that need to be taken into account.

PC: What is the feeling among players about how to reach the Dublin standards and what can be done to achieve that?

DH: I know we haven’t played Dublin in two years but I never went out on to a pitch any day thinking we could never beat them. People from the outside might think I’m deluded and maybe I am and maybe we are as a group but I never felt that because I would have played against Dublin at underage a lot and we always had the measure of them. I think it’s like everything. Man United aren’t winning the Leagues that they were winning in the past; Barcelona aren’t all the La Liga’s now at the moment, the All Blacks aren’t winning like they used to. These things will always come to an end. I wouldn’t be for what the media are saying about Dublin. All these things don’t last forever and hopefully Kildare will be there and that we will keep looking after out own house and controlling our own controllables and that we do put ourselves into a position to win matches and to win silverware down the line.