In this week’s Kildare Nationalist The Supporter, once again, asks the hard questions and looks for the right answers.

THANKFULLY, we’ve waved good riddance to 2020 and there’s light at the end of the tunnel with a return to normality on the horizon at some point in 2021. Even if the short- term picture is a bleak one as we go into hibernation once more. 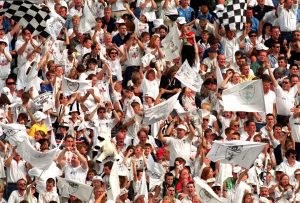 This column took a break for a few weeks and the year fizzled out from a GAA perspective in the meantime. Kildare’s minor footballers and hurlers suffered disappointing exits to good Offaly teams in the championship. We won’t know how good Offaly are for a while by the looks of it as their double attempt is put on ice with the latest lockdown. These lads could be drawing the pension when they get to finish the campaign.

At national level, Dublin’s six-in-a-row was confirmed with the minimum of fuss despite a brave effort from a transitional Mayo team appearing in a final perhaps a year or two too soon. Despite their valiant effort, it was arguably the most comfortable of Dublin’s six final wins and without doubt the easiest overall championship they’ve had with an average winning margin of 18 points in Leinster and 15 points overall.

Of course, that triggered the debates around the Dublin “question” and how the GAA can extract itself from this existential mess it has created. The notion that Dublin’s decade of success is attributable to a ‘golden generation’ sparked comparison between this Dublin team and Trigger’s broom from Only Fools and Horses, which remained intact for 20 years, despite needing 17 new heads and 14 new handles during that time.

I’ve said before that splitting Dublin seems to be the only sensible solution but has to be allied to a significant re-distribution of funding. Pat Gilroy’s notion that other counties should merge rather than Dublin split is one I’ve mulled over and perhaps there is an attraction to having just 12 to 16 teams competing with counties combining to form bigger population units.

This was a neat curveball from Gilroy in an attempt to deflect attention from the real problem, the population and resource discrepancy between Dublin and any other county in Ireland. A gap that seems likely to grow. It’s similar to the argument within counties as to whether smaller clubs should merge to form stronger units that would allow junior players to compete in senior championships.

At the end of the day, in both cases it boils down to whether identity and pride of place is more important than an attempt at equalising opportunities for teams to win the big prizes. While you can’t make an omelette without cracking eggs, it seems to me the idea of splitting Dublin into units that follow existing regional council boundaries is a whole lot less risky than half our counties losing their independence and with it the pride in their jersey.

There’s no easy answer here and there needs to be a serious debate within the GAA, not just in the media (social or otherwise). That’s the biggest disappointment to me of late, the absence of any real urgency within GAA management and elected officers to address the matter.

All of which brings me to the Kildare GAA convention held before Christmas. Looking back at reports of conventions past you couldn’t but be struck by the level of debate, questioning and angst among club delegates as they sought to right the wrongs of the day in Kildare GAA.

In the convention held in January 1971, the Secretary Peter Delaney resigned surprisingly after his request to delay the meeting a week to enable him to prepare his report after illness was denied, there were also questions over whether Moorefield were eligible to attend after they had withdrawn from County Board meetings and a lot more debate besides.

That year there were 39 motions put before the convention, and if that number rings a bell it’s also the number of minutes the most recent version lasted.

You can sense the drive for improvement from the proposals put forward in 1971 as well as some telling parallels and contrasts with today’s GAA. A special football board was agreed as necessary after success with a similar hurling version, a motion to remove the famous Ban was passed, as was an Athy motion complaining about the lack of GAA coverage on TV.

Athy were busy at the convention as they also had a motion requiring each county board to appoint a PRO approved. Imagine that even being a debate nowadays!

There was much debate about the club under-21 championships which had been started but never finished in previous years and it was agreed that a concerted effort would be made to complete those competitions in 1971.

Lost motions included a proposal to do away with the Railway Cup, around selectors for the county team, and a proposal from Sarsfields that the senior football championship be played on a league basis. It took a while for that to come about!

This year of course the GAA asked that no contentious motions go forward from clubs, an abdication of responsibility, virus or no virus. Indeed, we had no motions in Kildare. But we only had one in 2019 (Raheens one about passing back to the goalkeeper), and only two in 2018.

At supporter level this is a huge issue, we barely talk about anything else at this stage. But as someone said to me over Christmas “if they can’t find a screw to straighten the advertising hoarding of the senior football championship sponsors” in Conleth’s, it’s no surprise there’s little energy to tackle the bigger problems.

We won’t get started on the broken seating, scoreboard issues in both main grounds or the toilets in our county grounds which have been blocked since Seamus Aldridge was in short pants.

There was much back-slapping at the convention apparently over a relatively minor increase in Club Kildare income, but no one asked why a county the size of Kildare can earn as little as €7,500 from advertising income (per the accounts) in a year?

It’s hard to argue with Dublin folk when they say other counties need to up their game when you see figures like that and the apathy at convention. If I had one wish for 2021 in Kildare GAA it would be for a dramatic rise in energy and urgency from those elected to drive change.