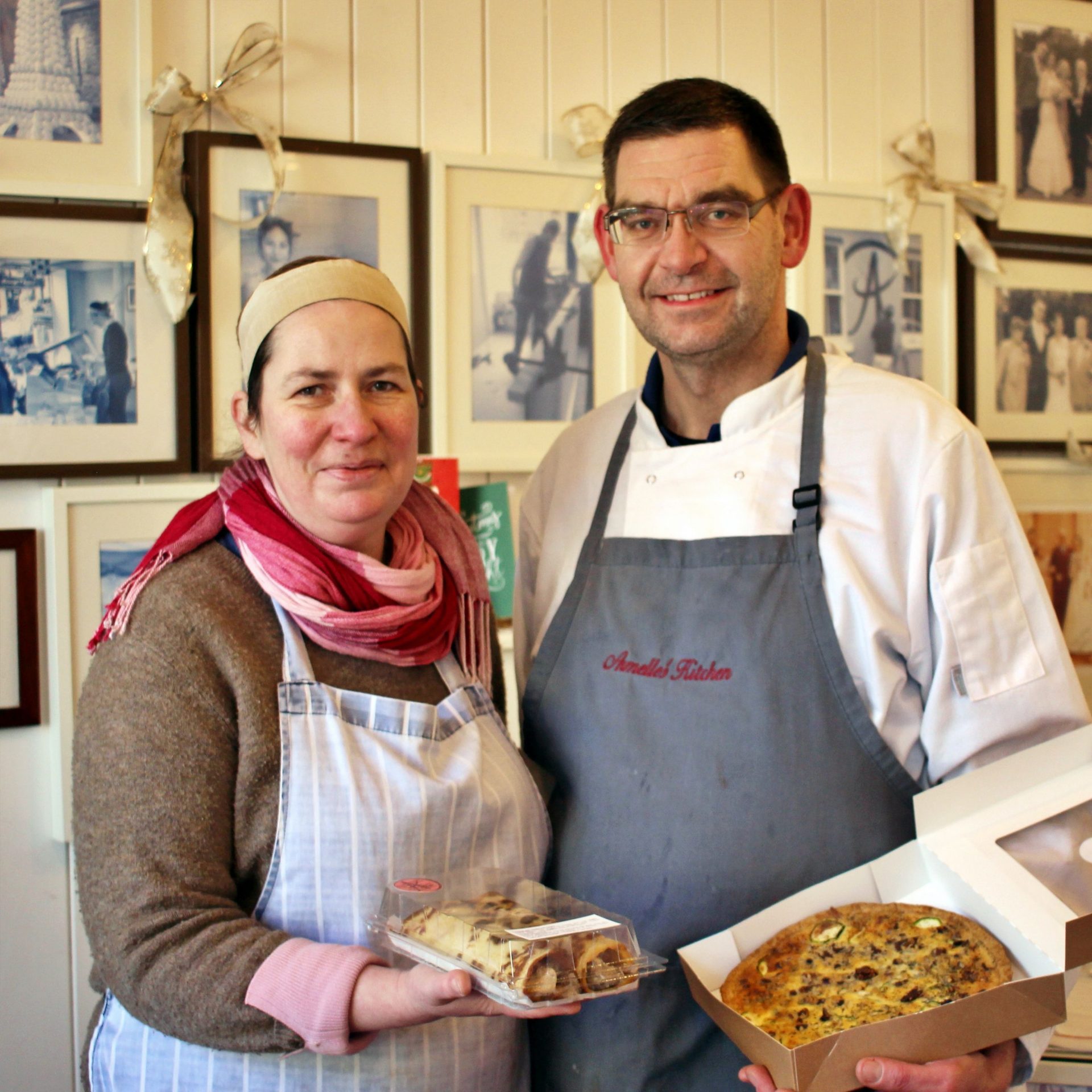 THIS time last year, Armelle’s Kitchen in Kilcullen had completed nine years in business and its owners had built up a very successful enterprise based around a main street cake shop and selling their products at regular markets in Dublin.
Operated by Armelle Siomboing and her husband Kenny Rorie, the business was exclusively based on traditional French pâtisserie sweet products and cakes for weddings and other family occasions.
Armelle and Kenny — she is from the north of France and he’s Scottish — worked hard in their kitchen and shop, and as well as building a business they had both become very much a part of the ‘new Kilcullen’.
Armelle first came to live there in 2005, though it was another five years before little packets of her ‘macarons’ began to appear in cafes around town, making their way from there into homes of those with sweet tastes. Her work background in Ireland up to then had been cooking in a number of hotels and high-end restaurants. She was made redundant in the big recession, and then it was a case of making her own way. In September 2010 she opened her first shop in Kilcullen, and two years later she and Kenny married. Three years ago they moved the business across the road to a larger premises.
“This time last year, all that had worked out,” she says. “As well as the shops and the markets and the wedding cakes, we were supplying pastries for the restaurant in Brown Thomas in Dublin. We had a very healthy business. Then came the first lockdown.”
Armelle had just arrived back from a visit to her parents in France, and though she was already expecting restrictions, the actual lockdown was a shock. Their immediate thought was how could they survive a prolonged stoppage. Could they replace the very important elements of their business which the travel and other restrictions had virtually wiped out overnight?
“When we looked at the guidelines, we realised that we could be classed as an essential business and stay open, which was a great relief. We had a chance. But we also knew that we had to change our product offering. The special cakes business was almost gone, and the sweet products wouldn’t be enough to keep us going.”
With the realisation that takeaway hot food was going to be in more demand, they began testing the market with a couple of daily savoury dishes. “We first tried a couple of things that we were cooking for ourselves at home, which were quiches and savoury crepes. People tried them, liked them and came back for more. So we developed the menu further over the following months.”
The shift did mean that they had to invest further in their kitchen, adapting it to meet the requirements of working with meat products. But the business pivot worked. By the end of summer, Armelle reckons they had replaced with savoury foods the business lost in the markets and cakes.
“It was ‘try and see’ with what we liked for ourselves. The crepes, for instance, are a speciality where I come from. We developed over time a range of dishes — maybe 30 or 40 at this stage — which were based on what people said they liked, and on what ingredients were seasonably available. In the summer months we did a lot of salad dishes, now in the colder months it’s the more hearty meals are most popular.” Through this latest lockdown, Armelle is expecting that up to 75pc of sales will be based on savoury products.
“We have been very lucky, people have been so supportive. They come and try and then let us know what they like, what works and what doesn’t. If we didn’t have people willing to come and try first, it couldn’t have happened.” The shift in direction also means that in addition to the ‘pâtisserie’ designation they have added another French label to their shop, ‘traiteur’. That’s an old French name for restaurant, but equally used for a place that sells takeaway restaurant food.
While the shift in business strategy did work, it hasn’t been easy. Meeting the demand with just the two of them has meant non-stop long hours, not just in the shop but in developing and testing dishes for each week. “It was all go-go, in survival mode.” Armelle says the recent few days after Christmas was the first opportunity the pair have had to pause and look at what they have done and where things might go from here. Part of that last is hoping that in the coming months, the coronavirus issue may improve enough that they can travel to visit their respective families.
In the meantime, though, they are helping out local families through their food delivery service. Kenny goes out several times a day to deliver dishes ordered by customers who are staying home because they are elderly or vulnerable. “During this lockdown, a third of our savoury orders are delivered. We also bring a few other things if people want them, maybe some eggs from the town or a newspaper. That’s very much appreciated, but maybe even more so is the contact, the five minutes of chat sometimes at the gate or the door.”
Coronavirus has overwhelmingly been a negative story over the last year. But within the overall narrative there have been positive nuggets which show that people are essentially able to overcome adversity. Armelle and Kenny, and their attitude of ‘well, we have to get on with it’, is just one of those stories among many.