Council gets 40 fly-tipping reports every week 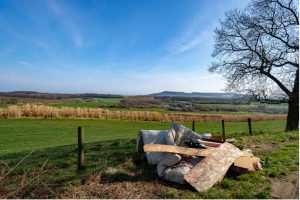 KILDARE County Council is to start using social media to highlight fly-tipping and illegal dumping, but stopped short of doing so for all such occasions because of the volume.

“As over 2,000 reports of illegal dumping and fly tipping are reported to the Council each year, it would not be possible to highlight all such incidents and locations on social media,” said Brian O’Gorman from the Environment Section.

He was replying to a motion from Cllr Bill Clear at the December meeting of the full Council “that the council use its own social media outputs, including twitter and Facebook, to highlight all illegal dumping taking place in Kildare”.

“We all know illegal dumping is a blight and it makes me so angry,” said Cllr Clear.

“Social media is a great tool available to show what’s going on, because it’s at epidemic level in Kildare countryside,” he said.

“GDPR should not be a reason to stop this,” he added, referring to the legal concerns around general data protection regulations (GDPR) in publicizing details or footage of fly-tippers.

“If you’re going to drive to the countryside, you might as well go to Sillot Hill,” he opined.

In fact, just on St Stephen’s Day Cllr Clear acted on his own suggestion, posting: “Sillot Hill, Kilcullen Road. A car load of cardboard only €2.50 per car. Easier than jumping into the bin”.

“The council needs to be cognisant of data protection and privacy requirements when highlighting actual locations of dumping, and promotional campaigns need to be carefully thought out, so as not to highlight dumping blackspots for people to dump more,” warned Mr O’Gorman.

“The public’s proactive engagement in reporting such cases for investigation and becoming involved in local anti-dumping initiatives continues to be the most important elements of the council’s campaign to tackle this issue,” he added.

“While the main aim of the Council’s social media platforms has been to discourage illegal dumping and highlight anti-dumping initiatives, the Environment Department will look at highlighting particular incidents taking place in the county,” he confirmed.

Currently, the Council is launching an Anti-Dumping Initiative ‘Your Country – Your Waste’, in conjunction with the My Waste.ie website.

This campaign includes a tailored suite of information and awareness messaging for use by the Council, community and voluntary groups and will visually highlight the negative aspect of illegal dumping and encourage the public to continue reporting incidents of illegal dumping.

Last year, the Environment Department undertook an online advertising campaign for dog licences and this significantly increased awareness of the licensing requirements.

A similar advertising online campaign is being planned to promote the use of authorised waste collectors by the public.