Paul Doyle – Suncroft – A Player Ahead Of His Time

The first in our new series, Heroes of the Past, features Paul Doyle of Suncroft and Kildare and appears in this week’s Kildare Nationalist, out now.

IT’S a roll of honour that only a Metropolitan player could dream of nowadays: three All Ireland medals, seven Leinster titles, one Ulster crown, three successive Railway Cups with Leinster and a Tailteann Games with Ireland. 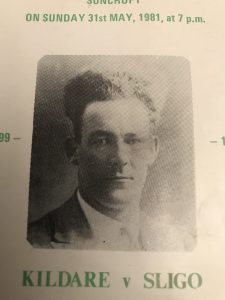 Only Mick Buckley of Caragh can match Paul Doyle’s haul of three All Ireland medals, accumulated from six final appearances including one replay.

Kildare’s great rivals in the latter half of the 1920’s were Kerry of course, and the Kerryman newspaper, previewing a highly-anticipated league game in 1929 had no doubt who the dangerman on the Kildare team was, one very much ahead of his time in the wandering wing-forward role that is ubiquitous nowadays.

“One of the greatest footballers the game has seen is Paul Doyle, Kildare’s left-winger. Though assigned to the wing, Doyle is a rover. From the half-back position to the “square” he wanders, always on the alert. Doyle has cultivated an extraordinary knack of lifting the ball from the ground. Kildare’s most prolific scorer, very fast, deadly accurate, and of uncanny cuteness, Kerry’s greatest problem in the Kildare engagements is the marking of Paul Doyle.”

Born in 1899, the young Doyle lived with his father, Robert, a carpenter, mother, Catherine (nee Moran) and brothers Tom and Johnnie, at Knox’s Corner on the road between Brownstown Cross and Jockey Hall (or Nijinsky’s Nightclub as those of a certain vintage will know it).  He went to school in Cut Bush where his love for football developed.

Doyle first came to prominence playing for Maddenstown when at the age of 19 he helped them overcome Leixlip to claim senior status. He came into the Kildare side at the age of 20 in 1919, making his debut in the Leinster semi-final against Westmeath in Edenderry on the day Jim O’Connor from Twomilehouse scored four goals.

The youngster was kept in reserve after that and wasn’t named on the team to play Galway in the All-Ireland Final but he was called upon to start when Peter Grady was ruled out. Doyle fully justified his selection at wing-back as Kildare overcame Galway surprisingly easily on a 2-5 to 0-1 scoreline.

The early ‘20s were disastrous years in Leinster for Kildare, who lost three times to Dublin, twice to Wexford and once to Kilkenny.

Doyle joined the newly formed Irish Army in 1922. He reached the rank of Company Quartermaster Sergeant and continued in service until his untimely death in 1953. Paul moved around the country, serving in many barracks, including Dublin, Athlone, Cavan, and the Curragh, and he played his club football mainly with Army teams although he also served St. Brigid’s of Kildare town, Virginia Blues in Cavan with whom he won a county championship, and in later days his home parish team of Suncroft.

While in Cavan he managed to add an Ulster title to his many Leinster ones.

Doyle didn’t play for Kildare in 1923 and 1924 but his return in the winter of 1925/26 helped to bring about an upturn in the Lilywhites’ fortunes. They would go on to dominate Leinster for the next six years, reaching the All-Ireland final five times, winning twice. Doyle as an ever-present scorer in chief throughout those glory years.

He and Larry Stanley were Kildare’s main scoring threats in the replayed final against Kerry in 1926 where Kerry’s Gorman scored a late goal to deny Kildare in the first match. Kildare had little luck in the replay, hitting the woodwork on three occasions. The wily Southerners marked Doyle tightly but he was still his team’s top scorer with two points from play as a Mahony goal sent Kerry on the way to a 1-4 to 0-4 win.

The following year, with Stanley now concentrating on athletics, Doyle was the main man in attack as Kildare breezed through Leinster and an All-Ireland semi-final with Monaghan. The stage was set for another joust with Kerry.

That 1927 final will not go down in the annals as one of the most attacking games ever. Kildare were slow to start and trailed 0-3 to 0-1 at half-time. Doyle scored his only point of the game immediately after the break to kick-start a recovery and with Kerry failing to score after the 22nd minute, a third All Ireland (Doyle’s second) was secured on a 0-5 to 0-3 scoreline.

Kerry did not cross Kildare’s path in 1928, courtesy of their shock Munster semi-final defeat to Tipperary, so the Lilies defended their title against an unheralded Cavan in the final.

Doyle, whose picture seems to adorn every match report of the era, was “never seen to greater effect” according to the Irish Independent, scoring five points in Kildare’s 2-6 to 2-5 win to claim the Sam Maguire Cup, despite a heroic effort from the underdogs from Ulster. He was involved in both Kildare’s goals and was playing at the “top of his form” according to the Nationalist. It was his finest hour.

The scoring feats of Doyle and J.J. Sheehy lit up the 1929 final as Kildare, in their fourth successive decider, renewed rivalry with Kerry. Doyle weighed in with five points for the second final in a row but his opposite left-wing forward went one better with Kerry emerging 1-8 to 1-5 victors.

Doyle had the honour of captaining Kildare in 1930 but after beating Meath in a replayed Leinster Final, they came a cropper in a shock defeat to Monaghan in the All-Ireland semi-final. Doyle was switched to midfield that day due to injuries but weighed in with three points. It was the first time Kildare had lost a championship match to anyone other than Kerry in five years.

He was 32 in 1931 but was still Kildare’s go-to forward. They needed a replay again to get past Meath, Doyle coming back from injury to score the all-important goal direct from a free. He scored 1-5 in the final against Westmeath and another three points against Cavan in the All-Ireland semi- final.

The final was a different story as Kildare renewed acquaintances with a three-in-a-row chasing Kerry side. Doyle was at full forward but was held scoreless by a tight Kerry defence. That said he twice managed to rattle the crossbar in the first half and was a key player in a largely new Kildare side.

Kerry pulled away though to win by six points and it was to be his last appearance in the white jersey. He played 61 times for the county.

Suncroft GAA club honoured him in the early 1980’s with the Kildare team playing in an annual Paul Doyle Perpetual Trophy challenge. The 1981 match programme recalls a story from Newbridge publican Jim Coffey which encapsulates the man off the pitch.

Doyle rarely missed an important game after his retirement and Coffey recalls one Sunday when three club games were played in Newbridge. Jim takes up the story:

“He visited Coffey’s later and an over-excited official of one the clubs involved who appeared to be an extra special friend of the former star said in a loud voice: “Now Paul, I want your honest opinion of our little team and how far are we going to go.” Paul replied: “They seem to have a great chance and with a little extra training and a bit of luck, they may go the whole way.”

As the very happy official departed for the toilet, Paul called me hurriedly and whispered, “Who is your man and what club does he belong to?” I told him and said, “I thought you knew him well.” “I don’t know him from Adam,” Paul replied, “but I’d hate like hell to hurt his feelings.”

A superstar on and off the field.