More than 100,000 Covid vaccinations given in North 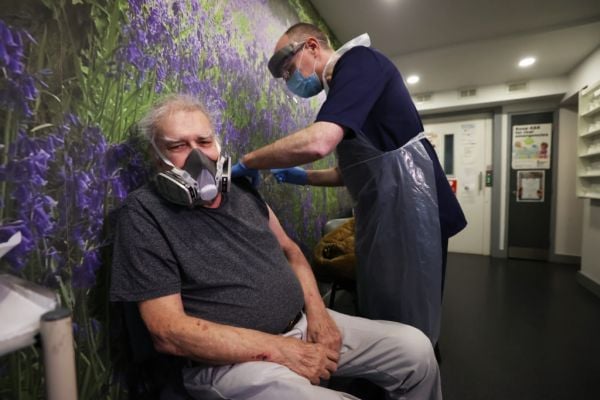 More than 100,000 coronavirus vaccinations have been administered in Northern Ireland.

Stormont Health Minister Robin Swann said the programme is being stepped up but is dependent on the availability of supplies of the vaccines.

“By close of play yesterday [Tuesday], 109,259 doses had been administered, with 91,419 people having received their first dose,” he told an Executive press conference in Belfast.

“With our GP-led vaccinations barely off the starting blocks, already close to 20 per cent of our over-80s have received a jab.

“The programme will be scaled up rapidly as supplies allow, and I have to emphasise again that availability of supplies is the key limiting factor at present, not locations or staffing or operating hours. Supplies are limited.

“We cannot vaccinate everyone right now, much as we would like to, but we will get there, steadily and systematically.

“The supplies will keep coming in batches and we will keep prioritising in line with the Joint Committee on Vaccinations and Immunisation guidance.”

Meanwhile, Mr Swann said lockdown in Northern Ireland is producing results, with the number of cases dropping, but added “the challenge is to keep it there”.

He said restrictions will be kept under review by the Executive, and ministers “may well have some further challenging decisions to make by early February”.

“We will have to avoid easing restrictions too early or too widely, the situation in our hospitals is too precious for that,” he said.

Chief scientific adviser Prof Ian Young said the average number of new cases of coronavirus per day in the region had risen to more than 2,000 a day.

He said that while the number of cases is falling, they remain at a “very high level”.

“Even now as we see the numbers falling, getting lower, they remain at a higher level than at any time in wave one or wave two of this epidemic,” he said.

“So, what everyone is doing is working to reduce cases, but we still have a long way to go.”

Ireland targeting Covid vaccines for all adults by September, despite supply fears