One of the many features in this week’s Kildare Nationalist, in shops now.

IT’S Sunday 4 October. As cold, wet, windy and miserable day as you are ever likely to find. He lines out for Clonmullion away to Kilcullen and scores two goals from the penalty spot in an outstanding performance for “The Mull” despite a 6 – 4 defeat. 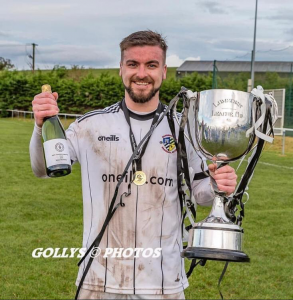 With the Lumsden Cup for Clonmullion FC

Home to Athy then. A quick bite to eat and then it’s off to Hawkfield Pitch 2. The weather has even worsened, if that was possible, as he lines out for Castlemitchell and scores 1 -8 as ‘Mitchell draw with Kill to qualify for the quarter final of the Tom Cross Transport Junior Football Championship. The goal came from the penalty spot.

That’s the life nowadays for Cody Mulhall who was born 24 years ago in Athy town in a family that includes three sisters, Rhona, Niamh and Amy, his Mam, Caroline and step father, Brian Hickey.

“I wanted to leave school as soon as possible and go and play football,” Cody laughs as we caught up with him this week. While he got the chance to play football severe knee injuries stalled his dream as he was about to make it on two occasions. Cruel luck indeed.

Cody Mulhall’s story starts playing GAA for Athy and soccer for St Anne’s Ballylinan up to the age of 11 before moving to Athy FC and then to Stella Maris in Dublin.

It wasn’t all plain sailing though for the young Mulhall as in his Kennedy Cup year he broke a leg but recovered in time to participate in that great U13 tournament.

All the while, Stella Maris FC, that famous DDSL club which produced Irish internationals going back to John Giles, Eamon Dunphy, Ronnie Whelan, Keith Andrews and current Shamrock Rovers player, Joey O’Brien among others, were watching the young Athy player.

Cody signed for the Dublin club for three years. Although he had no problem settling in there and playing football the toughest part was travelling up and down. It was straight from school, get changed in the car and eat dinner in car.  “It was tough but it was something I always I wanted to do so I wasn’t going to let school stop me from doing it. My mother and Brian drove me up for the three years I was there. They were brilliant and made it easier on me,” he adds.

While at Stella Maris Cody was called up for Irish underage duty and was one of only three or four home based players involved with the Irish set up at that time. “Jack Byrne was at Man City at the time, Daniel Cleary at Liverpool and Jake Mulraney was at Notts Forest at the time,” Mulhall recalls.

Trials at Everton, Fulham, Aston Villa, Derby County, Blackburn Rovers and Hibernian FC in Scotland were also undertaken and while Fulham were very keen to sign him the fact that there were up to eight Irish players at Hibs and Pat Fenlon was the Manager swayed him and his family to head for the Edinburgh club.

“It was an absolute dream come through,” the now dual player remembers.  Gareth McCaffrey came over with me from Stella and we lived in same house and that helped the settling in process.”

Things went well at Hibs and according to himself he was “agonisingly close to making the first team. “Pat Fenlon told me that I would be involved in a League Cup game against Hearts but a week before the game I snapped the cruciate in my right knee in an U20’s match against Dundee United.” The injury was even worse than first feared with damage to the hamstring also showing up on the MRI.

Cody was still only 17 but the injury put him out of action for 13 months. “Mam came over couple of times when I was really low and couldn’t get out of bed and she did what mothers do,” he laughs. The setback made me realise that even if you work so hard you can’t take anything for granted. My dream was literally hanging by a thread,” he added.

Mulhall showed tremendous character in fighting his was back to fitness but by that time in 2014 Fenlon had been sacked by Hibs as had his replacement, Terry Butcher. The club had also been relegated and due to a massive wage cut he and his former Stella team mate, McCaffrey were released.

Cody returned to train under his old boss, Fenlon, who by now was at Shamrock Rovers, and following a trial it looked like the Athy man would sign for Chesterfield who were managed by Paul Cook, the former Sligo Rovers boss.

Enter Lady Luck of the cruel variety again as the cruciate in the left knee snapped this time and so ended the Chesterfield dream and was “the beginning of the end of me playing at the top level. I was out for 12 months this time and I do believe that if I had still been at Hibs I wouldn’t have lasted. It was a little easier as I was at home with my mother and family all round. At the same time, it was heartbreaking as I was maybe getting another chance to go and try and make it and I had another setback,” Mulhall ruefully explains.

Back to full fitness again and the Athy dual player played with Longford Town for a while before settling with Paul Perth at Newbridge Town. “Playing at Newbridge Town under Paul Perth was the time that I most enjoyed football in a long, long time.  I was allowed freedom, allowed express myself. I was playing behind the striker. Paul built a team around me and a few others and I felt wanted again; I was with a manager who appreciated me and wanted me to play football for him. He’s probably the only manager that would entice me play for Newbridge again,” he says.

After a successful spell with Newbridge, it was off to Clonmullion for Cody Mulhall. “It didn’t go down too well with some of my family,” he laughs. My Stepdad had managed them a year before and he was still part of coaching team.  At the time I didn’t want to play football at all but with Clonmullion I got to play with my friends, play with my mates. I was enjoying playing football  like I was 12 or 13 again with not a care in the world,” he added.

While things were going well for Clonmullion and Cody Mulhall a “night out” led to himself and Michael Lawless joining Castlemitchell GAA club. “It was a couple of days later when we realised what we had done but Michael texted me to say “I’ll go if you go” and I absolutely love it,” Mulhall enthuses.

“I didn’t think I’d get back into the swing of it. I was a goalkeeper when I played underage GAA and now I’m playing corner forward and absolutely loving it. It’s a release from football where there was pressure all the time; nothing is expected off me now.”

Mulhall “fondly” remembers that horrible Sunday that we outlined above but says he is “frustrated with gaelic being cancelled as it was going full throttle.”

What about his ability to win and score penalties in both codes we asked? “I’m being fouled”, was the quick response to the first part of the question. As regards the scoring part, well this writer would prefer to keep that off these pages in the event that the Clonmullion/Castlemitchell sharpshooter should have a spot-kick saved and then the finger of blame might be pointed in this direction!

Is his dream of professional football over? “I can’t see myself going back unless there is a chance to play at one of top clubs in Ireland. It’s tough financially travelling up and down from Athy to training at part time clubs. I recently started a good new job on my doorstep in Tegral. I am happy out with this and with how everything is going at the minute with Castlemitchell and Clonmullion,” Cody concludes.

Whenever gaelic games and soccer return at club level in Kildare we are looking forward to watching Cody Mulhall in action and to reporting on his exploits on these pages.