We include a feature on Naas Racecourse with General Manager, Eamonn McEvoy, in this week’s Kildare Nationalist Sport.

ALTHOUGH he had big shoes to fill in taking over from previous incumbents, Tom Ryan and Margaret McGuinness, Eamonn McEvoy probably took over as General Manager of Naas Racecourse at a good time both for the Racecourse and himself personally in July 2019. 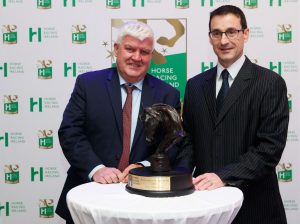 “The position struck a chord with me and even though it was completely new having worked for the previous nine years with Rick Barnes at Grangecon Stud, it was the right move for me at the right time,” the Clogherhead, Co Louth native explains.

McEvoy’s experience of attending race meetings all over the country was a valuable asset to him as he knew what a racegoer wanted and looked for from a racecourse. “I always enjoyed Naas even though we never had a winner here in my time with Rick although we came with a few really fancied runners. It wasn’t until after I left that Rick had a winner at Naas,” he says laughing.

Eamonn McEvoy is full of praise for what he was “inheriting.” “The facilities at Naas are great now thanks to the great work done by Tom Ryan and Margaret McGuinness before him. Both have been a great help to me.  Margaret probably spent 50 years here, she’s a lady and comes regularly to Naas. She’s a great connection.”

The General Manager is full of praise, too,  for the Board of Naas Racecourse. “The Chairman, Dermot Cantillon, is always calling in or will give a call to see how everything is going; he’s good guy to work with, while Mick Kinane (who joined the Board in 2019) is very much into the racing surface and he’s a great support on that. Mick is a great man to bounce ideas off if you are going to make a change on the track,” he adds.

“It’s all about the track with the Board. They see the big picture, always looking to upgrade and for improvement. The racetrack is the most important part as unless we provide good ground and a good racing surface then Trainers and Owners will not bring top class horses here. At the end of the day that’s what we want and last Wednesday’s meeting (Lawlor’s of Naas Grade 1 Novice Hurdle Day) proved it as we had a couple of winners there that you would hope to see in the mix for Cheltenham come March,” McEvoy tells us.

A permanent staff of nine can swell to 70 or 75 on race days. “Roy Butler is the Track foreman. Roy has come from a golf background and he is very detailed. He has been here for two years now and things are really at where he wants them now.  Roy is backed up by a great track team with a couple of them here for over 20 years. With some of the weather they have had to deal with in last couple of weeks we never hear any complaints from them. They are the core team out on the track, a small team but a great team,” Brendan McEvoy says.

Just like most other business Covid – 19 has proved challenging but according to the General Manager the Board showed great support and leadership from the start by keeping everyone’s job at the track. Because they come under the Department of Agriculture meant that the track team could continue to work on the track such as repairing the jump track after the season and preparing the flat track for the new season.

“Then we got the call asking if we were interested in going on 8th June. We were only too delighted because it meant we were back going again. We had raced behind closed doors on 23 March so it wasn’t that daunting for us,” McEvoy tells us. “Jennifer Pugh, the Chief Medical Officer, drew up a list protocols and the HRI and IHRB really kept a tight ship.”

“Of course, the Owners are frustrated and we’re very frustrated as a business not having spectators in the gates. It’s a difficult position but safety is a priority and keeping the industry going is very important.”

Referring back to the Lawlor’s of Naas Grade 1 Novice Hurdle day, which was postponed from the Sunday to last Wednesday because of a frozen track, McEvoy says, “To me when you see a horse of the calibre of Envoi Allen (2019 winner) come in and then go on and win at Cheltenham, it’s brilliant. Wednesday’s winner, Bob Olinger, will go and compete in Cheltenham as well so if we could get another follow up win this year it would be brilliant. Then we had Energumene the Novice Chase winner, brilliant to watch that but it is a strange feeling to be racing behind closed doors.”

The March lockdown hit Naas Racecourse “very hard” according to the General Manager, with “good revenue days” such as Aiden O’Brien bringing horses to have a racecourse gallop and a concert attracting up to 5,000 people falling foul of the restrictions. Courses with KWETB and HGV Training Courses were also stopped.  “We are looking at getting some concerts going and a lot of other non-racing day revenue generators.  It is frustrating that our successful Drive in Cinema has had to be cancelled. I don’t know how a couple of people sitting in car watching a screen is going to do any harm but we just have to follow the guidelines. We are lucky that racing can keep going,” he adds.

Involving the local community is very much to the fore in the Naas Racecourse activities. “We work with local clubs like Naas Rugby and Kill GAA for fundraising days in our restaurants. Naas GAA had a Drive -in Bingo before the latest lockdown,” Eamonn McEvoy explains.  “We are willing to work and help any local team, and the Board is very supportive of this, and if we can help the town or the community in any way then we will.”

The General Manager is keen for Naas to move out of the perceived shadow of Punchestown and The Curragh. “Curragh is the home of Irish flat racing and Punchestown is the home of National Hunt. They are unrivalled but I would love at some stage to look at the possibility of having a two-day weekend festival here.”

“Every 3-year-old in Europe from distance of a mile, a mile and a quarter or a mile and a half has a Grade 1 option before the Royal Ascot meeting but sprinting as a division doesn’t so trainers try and go for an early Group 1 forcing sprinters to maybe try and run a mile which they can’t.  I don’t understand why there is not a Grade 1 target for these sprinting two-year-olds that have won as two-year-olds but have to wait till the Commonwealth Cup in June for a Grade 1. We could easily have one here for them in May if they upgraded the Lacken Stakes,” McEvoy further explains.

Naas Racecourse does a lot to promote themselves to the town, according to the General Manager, with events like “Naas Town Goes Racing” and he is full of praise for the work of Jackie Donohoe and Niamh Byrne on the promotion and marketing side with the feedback, he says, second to none.

“Local people I have met in Nass say they don’t go up here that much as they think they have to walk up the Dublin Road to get access. That Dublin Road entrance is only open on race day,” he tells us. “The main entrance to the Racecourse is on the Tipper Road which is literally a five-minute walk from Lawlor’s Hotel.”

Future plans could include replacing the summer marquee with a permanent building to cater for events such as weddings or a convention centre. “We are always looking at something that we can develop that we think will be a fit,” Eamonn McEvoy concludes.

With another big race day on 31 January, two more each in February and March and the start of the flat again at the end of March the ever-inventive Board, General Manager and Staff of Naas Racecourse are sure to be busy as they hope for some people in the gate again to enjoy their Summer BBQ evenings.

The Kildare Nationalist, in your shops now.