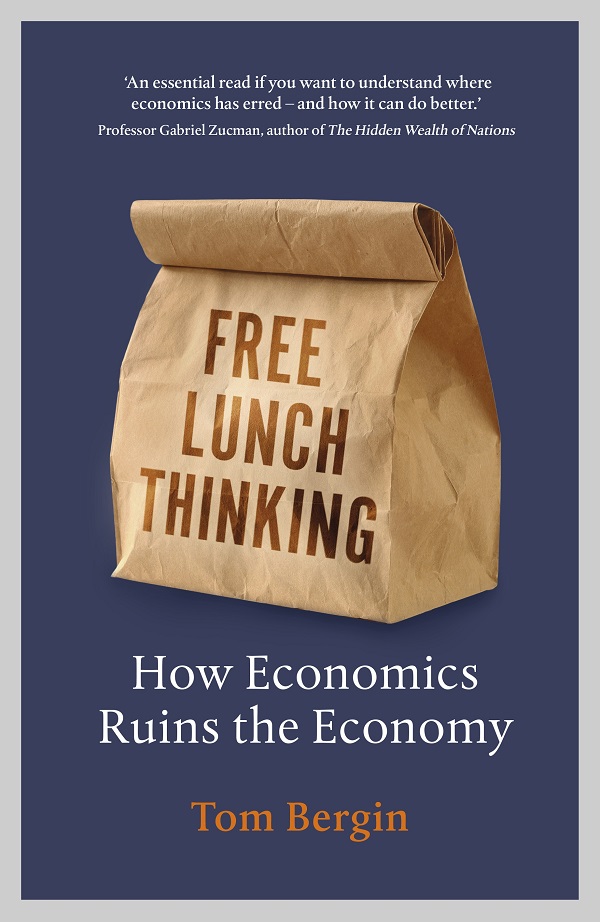 Economic theories and models shape our everyday lives. They’re relied on by politicians when tax rises or cuts are being considered. They inform debates about everything from bonuses for CEOs to minimum wage rates to the level of job protection enshrined in law. They determine what levels of tobacco or petrol duty are charged and influence government approaches to issues as diverse as obesity and climate change.

The question is – are policymakers right to be so slavishly reliant on them? Kildare man Tom Bergin is sceptical and in his upcoming book, Free Lunch Thinking: How Economics Ruins the Economy, he subjects eight of the most prevalent economic mantras to close scrutiny, assessing how they play out in practice.

Tom, who grew up in Kildare town, lives in London with his wife and two sons and is an investigative financial journalist for Reuters. His work has prompted parliamentary inquiries and won numerous awards in Britain, the United States and Asia, including a Gerald Loeb Award for Distinguished Business Journalism and the Orwell Prize for Journalism, while in 2013 he was named Business Journalist of the Year at the British Press Awards. His previous book, Spills & Spin: The Inside Story of BP, was a Sunday Times Politics Book of the Year in 2011.

In Free Lunch Thinking, Tom shows how individuals, companies and markets fail to respond to policy changes as theory predicts and exposes the missed opportunities and wasted resources that result. And, by tracing the development of key economic tenets, he demonstrates how their champions’ tendency to believe in phenomena for which they have little hard evidence leaves accepted economic wisdom frequently being more about faith than facts.

The book is dedicated to his dad Charlie and, in the acknowledgements, Tom noted that as a boy his dad “filled our house with books about international relations, science and the most arcane of historical subjects in a way that wasn’t common in Ireland in the 1970s. My mother, who died when I was three, was also an avid reader. Their love of books has influenced my life.”

He told the Kildare Nationalist that his dad’s “interest in the world, his interest in history and politics and world affairs, it certainly rubbed off on me and helped spark the career that I had in later life.”

Of the book, Tom said that it’s “intended to appeal to not just financial professionals or economists, it’s very much aimed towards people who are trying to understand the economy and understand world affairs. It tries to explain in simple and easy to read and even entertaining terms the reasons why we have certain policies in the world that influence millions of people’s lives. And one of the things it’s trying to do is really show that a lot of things that governments do… there’s not a lot of evidence for them.”

He said that he’s coming at this “as a journalist rather than an economist. And what that means is I come at this through my own experience as a reporter, reporting on issues like what companies do around taxation and, you know, how people respond to price signals be that in terms of the cars they buy or the products that they buy, so it’s very much looking at stories of how people behave and… showing that very often that doesn’t match up with what economists say happens.”

And he said that Ireland features quite a lot in it, a reflection “I guess partly a bit about my own background but also because Ireland is very frequently used as an example in matters of economic policy internationally… when people look at issues like tax policies, Ireland is frequently used by academics in the United States and in Europe as an example of the way in which taxes might influence the economy. Now, I think a lot of the lessons might be misconstrued and people often look at Ireland and look at its economic success and try to use that as proof that their point is correct and they’ll cherry-pick from Ireland’s experience, certain things the government will have done, and say oh that shows if you do that you’ll be successful.”

I remarked that we’re living through strange times and asked Tom if it’s an interesting time to be a financial correspondent for a global agency like Reuters. The Kildare man said that it’s an “unprecedented time to be examining the financial world or global economies… there’s no playbook for how to deal with a pandemic, that said we do see that in times of crisis people try to look at the old toolkit and pull out some measures that might be employed to try and jumpstart growth or, you know, get the economy back on its feet. The problem is, as I show in the book, that a lot of times we end up reaching for tools that are pretty blunt or simply don’t function.

“There is a lot of conversation and we see it particularly here in the UK at the moment because with not just the COVID crisis but also with Brexit, people are scrambling looking for things that can really move the needle on the economy and they’re looking for things, to do things like slash taxes, slash regulation in the hope that this will give you a free lunch and suddenly the economy will take off. But as I show in the book, there’s no free lunches and at the end of the day it’s really just hard work that’ll get us out of this crisis. But it won’t stop people looking for easy answers.”