World Title Fight In Goffs On The Cards For Katelynn

The story we broke in this week’s Kildare Nationalist on the possibilities of an historic World Title fight in Kildare for triple World Champion, Katelynn Phelan.

KILDARE hasn’t hosted a world title fight in over a century but Leonard Gunning of Boxing Ireland Promotions informed the Kildare Nationalist this week that, subject to the lifting of Covid -19 restrictions, a Katelynn Phelan title fight is being lined up for the Goffs before the end of 2021. 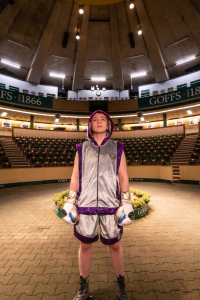 Phelan, who captured three World titles in the defeat of Jessica Schadko in Germany last autumn, will have a fight in Luxembourg on 20 March. “This will be a good test for Katelynn. Her next two fights will be outside Ireland and then we will bring her back for a title fight in Kildare,” Gunning predicted.

“We’ve looked at a number of venues for fights up and down Kildare over the last number of years but we could find no suitable venue until we came across Goffs. It looks perfect so now we are looking to make the fight happen,”

“We have been speaking to the people at Goffs and they’re really excited about it, which is great.  They want a big night for Katelynn Phelan there and despite the fact that we have Katie Taylor this would be the first ever world female title fight in Ireland and it would be a welcome home that befits a World Champion,” he added.

A number of crucial hurdles will have to be overcome before the title fight in Goffs can come to fruition, some inside the ring, some very much outside the ring.

The first hurdle occurs inside the ring where Phelan must win her Luxembourg fight next month to keep her on her upward trajectory. Not an impossible task given the form and class of the St Brigid’s boxer is in at the moment thanks to her coaches, Niall Barrett of Unit 3 Health and Fitness in Naas, and her Dad, Paddy.

“We don’t plan to defend the welterweight titles won in Germany as we hope to bring Katelynn down to light welterweight and eventually to the lightweight division where real big fights are happening,” Leonard Gunning explained. “The fight in Luxembourg will be at light welterweight. Katelynn is number 12 in the world, she is only 20 years of age and all her competitors in the top ten, bar one, are in their 30’s and 40’s.”

An even bigger hurdle to make the fight happen in Goffs covers the logistics and funding for such a fight. While there is confidence that the expected 600 capacity can be sold out a lot more funding is required to make it happen. “We are looking to the business community in Kildare to try and bring this massive, historic night of professional boxing to the county,” Gunning says.

“Additional sponsorship is required to make the fight a viable event and it’s not easy to get sponsorship at the moment as so many businesses are struggling. We have interest from TV stations and the fact that Katelynn was recently nominated for the RTE Young Sportsperson of the Year Award brings her under the RTE radar.”

“We have been offered World title fights since the victory in Germany but at higher weights and not in the best interest of Katelynn. We don’t need to take risks. What we want give Katelynn are fights that allow her to develop as a fighter and to grow into the lightweight division,” Leonard Gunning concluded.