Mick Buckley – A Man Who Under-Estimated His Own Ability

In the latest in our series, Heroes of the Past, we feature Mick Buckley of Caragh and Kildare in this week’s Kildare Nationalist.

HE is one of only two Kildaremen to play in three All-Ireland winning teams, Paul Doyle being the other, one of only four to have captained the Lilywhites to the highest honour, and but for his own modesty could have done so twice. 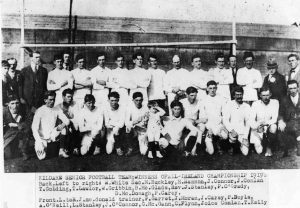 But at times, Mick Buckley seems to be the forgotten hero of Kildare’s glory days.

Maybe it’s because he was a corner back, not the most glamorous of roles. Maybe Caragh clubmate Larry Stanley’s star shone so brightly that he would gladly fall back into the shadows. His absence from the Kildare Team of the Century must have been a tight-run thing, but he was up against stiff opposition with Glenn Ryan shoe-horned into the full back line alongside Buckley’s 1920’s teammate Matt Goff from Leixlip and Clane’s Pa Connolly.

Never one to seek the headlines, Buckley was tough as nails but a stylist, nonetheless. The great Irish Independent writer John D. Hickey painted a picture that could so easily apply to Mick’s grandson Niall, when he wrote:

“It is said that in a standing jump for a ball he could go higher than any man of his time, before or since. His sense of position enabled him to do everything in seemingly unflurried fashion, and many a time he extricated Caragh and Kildare from the most dangerous situations.”

It was also said of him that “no man ever charged down so many kicks.” Buckley may have had style but he had the nuts and bolts of defending down to a tee.

Michael Patrick Buckley was born on 3 January 1897 to Thomas, a farmer, and Christina Buckley (nee Walsh) at Landenstown, Donore. He began his career with Caragh in 1917 and was part of the famous Junior team of that year that drew twice with Paul Doyle’s Maddenstown before winning out at the third attempt.

A glorious period followed as a Caragh team led by Buckley, with Stanley as vice-captain secured the 1918 Senior Championship beating Roseberry 2-2 to 0-5. Ironically, Buckley and his descendants would become synonymous with Sarsfields, the successor club to Roseberry after he moved to Newbridge.

Caragh were also denied the 1921 title, when, with the War of Independence in full flight and many GAA players “on the run”, they lost the county final to St. Conleth’s of Newbridge on an objection because they had excluded a player from the referee’s list “whose personal liberty would be endangered by his appearance on the football field.”

By then, Buckley was a key member of the county side and had an All-Ireland medal under his belt from 1919. But he and his Caragh colleagues stepped away from the county team for the 1922 campaign in disgust at the County Board (and subsequent Leinster Council) decision.

Buckley had made his debut for the county team in the Leinster Championship opener against Laois in 1919, aged 22, as a right-wing back (his conversion to the corner came in 1925). He must have thought it was an easy enough lark as Westmeath were hammered in the semi-final to set up a final against Dublin.

In Hickey’s interview he refers to Buckley being “as closed as an oyster” when any attempt was made to get him to discuss his football heroics, but he admitted that the Dublin match of 1919, which Kildare won by a point, was the toughest in which he had figured in his career.

“I will never forget the struggle we had against Dublin”, he said. “We were lucky to win that day – in fact, I would go so far as to say they should have beaten us. But although everyone hit as hard as he could – both sides hunted the ball in droves – it was all open and above board and we finished better friends than when we started. That is the way it should always be in the game, no hard feelings at the end.”

Mick had been made captain of the Caragh team for that 1917 championship campaign, ahead of Stanley and while he was happy to take on that role “to please the boys”, when the club became senior champions the following year, thus bestowing captaincy of the Lilywhites on his young shoulders, Buckley was having none of it.

In an incredible act of generosity, he handed the captaincy to his clubmate Stanley, as a tribute to the latter’s abilities. Perhaps he also had the foresight to recognise that Larry was such a gifted all- round athlete, he may never get the chance again to lead his county in a final. That’s exactly how it turned out, as Larry took to athletics and also had a spell with Dublin before returning to play for his county. Stanley timed his Kildare return badly though and missed out on the 1927 and 1928 triumphs.

Buckley stood up for Stanley when he was banned from playing for representing Belfast Celtic in soccer but the “Buckley motion” to withdraw the players from service was eventually withdrawn. Kildare beat Cavan and Galway relatively easily to clinch the 1919 All Ireland but they couldn’t retain the title, losing to Dublin the following year, and it was another six years until they won another provincial title in 1926, the first of the six-in-a-row at provincial level and four successive All-Ireland final appearances.

Curiously, Cavan requested either Kildare trainer Joe McDonald or Buckley to use their knowledge of the Dubs to help train them for the 1920 All-Ireland semi-final against the Metropolitans, and Mick was approved to travel, despite Cavan being considered “a dangerous place at present” by the County Board.

In Kildare’s comeback year of 1926, Buckley and Goff alternated between corner and full back but ultimately the Caragh man settled at 2 with Goff at 3. They beat Dublin en route to a Leinster Final win over Wexford and another convincing win over Galway in the All-Ireland semi-final.

Kerry’s late goal in the final earned a draw and Kildare went down in the replay but the two rivals were back in the following year’s decider. Joe Rafferty, a star of the first Kildare All-Ireland winning team, said that “When you have beaten Kerry you can really say you’ve won an All-Ireland” and Buckley clearly agreed, declaring that the 1927 win “was a great win and did we appreciate it!”.

As luck would have it, Caragh had been county champions again in 1926. This time the public would not hear of anyone other than Buckley leading the side and there was no escape for the modest defender. As Hickey put it, “Mick under-estimated his own ability, the value of his quiet leadership and the compelling call of his own voice.”

Kildare famously selected the same XV for the 1928 final and Buckley gladly left it to Bill “Squires” Gannon to become the first man to lift the Sam Maguire after a hard-fought one-point win against Cavan.

After appearing against old foes Kerry in the National League Final in 1929, Buckley made his last county appearance in the 1930 Leinster Championship against Laois. He had played 49 times in a Kildare career that spanned eleven years.

Apart from his Kildare honours, Buckley represented Leinster in Railway Cups and also in the 1924 Táilteann Games.

His interest in the game was all-consuming after his retirement and he was heavily involved in Sarsfields until his death in 1972 at the age of 75. He married Kathleen Curley from Prosperous in 1931 and their sons Tom, Pat and Mick junior, all played, the latter a panellist on the Kildare 1965 under-21 team, while grandsons Michael and Fintan represented Sarsfields with distinction.

Another grandson, Nuxer, of course, inherited the un-hurried style of his grandfather and his ability in the air, but fell just short of replicating his All-Ireland success despite a stellar career in white.

The Buckley apples didn’t fall far from the tree.

Kildare Nationalist in your shops now.