In this week’s Kildare Nationalist we carry Part 2 of our extensive interview with Peter Kelly in which the Two Mile House man was forthright in his views on commitment and the future of Kildare football. 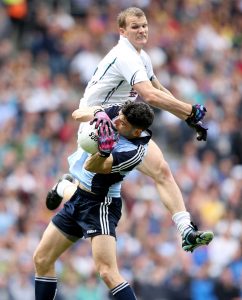 Pat Costello: What about players you either played with or against, Peter, who might have impressed you?

Peter Kelly: When I came into the panel first, I was 20/21 years of age and I was coming into a panel of what I considered as Kildare legends like Johnny Doyle, Ronan Sweeney, Dermot Earley and Anthony Rainbow.  These were guys that I would have grown up watching, not even as a teenager, even younger again. They were my heroes so to walk into a dressing room and these guys were around you it was a kind of surreal. They were not only heroes of mine but they were legends of the game.

When they retired, I suppose we haven’t fully replaced those type of players since really. Nowadays we have the likes of Kevin Feely, the Cribbins, Fergal Conway, they are not just athletes but men as well, the way they go about their game, their professionalism, the way they hold themselves. Its easy to say, from the outside, that a guy is a class player but you really only get to know a player when you play alongside him and get to know their character off the pitch as well.

Opposition wise I’ve had my fair share of roastings (laughs) but a Bernard Brogan you wouldn’t find difficult to mark but he’ll still score 1-3 off you. The likes of Dennis Glennon of Westmeath just had incredible pace or Stephen Bray of Meath as well, so fast and fit and you never get a chance to catch your breath marking someone like that. Lads like that I found the toughest.

PC: Is it getting to be a young man’s game now or is it just that players are starting their careers earlier?

PK: It’s a strange one really. I think Keith Cribbin was on the panel when he was just 18. Looking back when I would have started the training under Geezer (Kieran McGeeney) was actually a lot tougher than it is now. I don’t know if he still trains Armagh that kind of way with that kind of intensity.

I remember the preseasons we used to have and you were literally getting sick every week without fail. You knew you were going training and you were going to get sick because it was that tough. You’d have double sessions. You’d be on the Curragh and then you’d be over in the K Club doing strong man sessions or gym sessions; they were absolutely gruesome.

After that the rest of the guys came from a more scientific basis so everything was tapered to a certain time of the season. They were obviously tough sessions too but there was none of those grueling sessions anymore.

So, if anything ironically, they say the game is gone more professional but the training back then was harder to be honest. Under Geezer’s tenure more was expected of you. You put football first and that was it, full stop; it didn’t matter if you had work or if you had a family or whatever was going on if you weren’t at training, you weren’t at training and that was it.

It’s a tough question to answer to be honest with you. The game has probably gone more of a running base now so that maybe suits a younger man. There are an unbelievable amount of retirements at the moment of lads who are only around 30 years of age. I just think it’s probably the general commitment of it and I just don’t know if lads are willing to give it anymore.

You used to have lads having 15/16-year intercounty careers in times gone by but I honestly don’t think the new generation will do it for that long as you have to give up so much.

PC: The number of heavy beatings must be hard each year to come back from so is there a future for Kildare football and can the Dubs be beaten?

PK:  I don’t think anyone is going to beat the Dubs at the moment for another couple of years anyhow. If I had the answers probably, I’d be managing someone.

When you look at us as a county we should be up there if not next best then within distance of them, population wise or proximity to Dublin. We don’t have guys having to travel long distances for training as the majority are based in Kildare.

We can talk all day about Dublin’s advantages or whatever but I suppose we lost to Meath this year and I think I only lost to Meath once in my career and that was near the end in 2018 or 2019 in the League. Other than that, we’ve always beaten them. Same with Laois, I never lost to them.

We should at the very least say we’re second best in Leinster but at the moment we can’t even say that anymore. It’s hard to know where we are going and why things aren’t falling into place. Just from being involved in the squad over the last couple of years, and I don’t want to dis the younger lads, but maybe they don’t understand what it actually requires to reach the levels.

I’m just comparing me at my age to them now and the commitment that was given in Kieran McGeeney’s era. You gave up everything; you never asked can I go here instead of training or say I’m tired can I have a night off. You just literally gave everything; you cancelled everything else in your life, be it right or wrong, I don’t know.

Looking back, though, I wouldn’t have changed it but I suppose it was a bit mental as well when you think about it. You were a footballer full stop. So that’s maybe one thing I might point to, maybe the same levels of commitment aren’t being given at the moment and that’s not having a go at anyone. Potentially I think there is a life balance there as well. You can’t give it all but I can’t look at it from anyone else’s perspective but my own.

Like the Dubs I don’t know what they put in, and I suppose no one knows but themselves, but I’d imagine they’re putting in an awful lot to reach the levels they are reaching. It’s not just about money, winning a Sam Maguire is not as simple as that, it requires a savage level of commitment as well.

As you said earlier, it seems like it is becoming a young man’s game. Probably half the panel are students. A student’s life doesn’t require the same commitment as a professional life so there’s no reason why we aren’t reaching the same levels.

The talent is definitely there as we’ve seen at underage. Guys in the mid to late 20’s at the moment have won Leinster U21 titles, the likes of Paul Cribbin and Dan Flynn and Kevin Feely, serious talent that would even match the Dubs in a lot of areas. It’s a matter of trying to get it all together and matching that talent with commitment with a game plan.

I think there has been a lot of psychological damage over the years as well and scarring from those losses so from a psychological perspective there is a lot of work to be done as well to become winners. That’s probably where the Dubs have it over a lot of teams and when they have been tested over the years, they always just seem to find a way out.

It seems like it’s the opposite from Kildare over the years. We always seem to find a way to lose matches unfortunately.  It’s a huge combination of things. There’s nothing you can put your finger on and say that’s the magic answer. Is it commitment, is it psychological? I’d say yes, a lot of it probably is. The talent is there, we have a huge population and underage success so there’s no reason why it’s not filtering through.

PC: Would you be more hopeful than despondent then?

PK: Ah you have to be hopeful by nature so yeah, I would be I suppose. You have to scrap last year’s championship as it wasn’t really a proper championship per se. I think this year we need to build in Division 2 and really, we need to get into Division 1. You’re not going to be competing out of Division 2.

I’d be hopeful because the talent is there and I’m just hoping that, from a psychological point of view, we can change as a county. The belief has to be instilled. The young lads coming through have done it so there is no reason why they can’t believe they can do it again. As a group, whoever is in there just really needs to believe because if you don’t believe then you are not going to win anyway.

Every match I ever went out in I always believed I was going to win, even when I was playing the Dubs maybe not in the very latter years I didn’t fully believe as they had given us hammering after hammering, but I always believed we were going to beat them. Unfortunately, it never happened but maybe there weren’t enough lads believing.

PC: Finally, Peter would you have an ambition to coach or manage at club or intercounty level?

PK I haven’t given it much thought to be honest with you. I’m only 32. Funny enough I have received one or two phone calls but I haven’t gone looking for anything.

My own focus at the moment is to play with Two Mile House and hopefully have four or five good years left in me so I won’t be looking outside that. Maybe I’d look after an underage team at the club first and then look at it down the road, but it’s not something that would interest me at the moment.

A dedicated, committed and thoughtful player, on and off the field, we wish Peter well in his intercounty retirement and look forward to seeing him representing Two Mile House for many years to come.

The Kildare Nationalist is in your shops now