Following ratification of his appointment as Kildare Minor Football Manager, we feature an interview with Naas clubman, Cyril Kevlihan, in this week’s Kildare Nationalist

NAAS Clubman, Cyril Kevlihan, was ratified at the February Co Board meeting to manager Kildare’s minor footballers for the coming season. He will be joined on the Management Team by Chris Carey, Two Mile House, Tom Moran, Rheban, Ray Kiernan, Clane, and James Devane, Straffan. 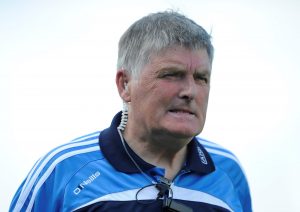 The retired teacher takes over from Michael Conneff who was manager for last year’s truncated season.

A resident in Naas for over for 15 years now, the former Thomas Davis player and mentor was involved in Dublin Development Squads for over 20 years, “a great experience”, and was involved in and successfully managed Dublin minor teams from 2009 to 2014.

“We had good contests with Kildare in those times and I remember Kildare had a very good team under Brendan Hackett in 2013 and I got to know Bryan Murphy quite well even though we were on opposite sides. We’re on the same side now,” the former Hartstown Community School teacher says.

Cyril Kevlihan is a noted Coach Education tutor with Leinster GAA and although this will be his first management role in Kildare, he says he has had a small involvement with Naas and was involved with the county development groups over the last three or four years. “I have first class people with me so we are looking forward to doing the best we can,” he tells us.

The new minor manager and his team are working with a group of 80 players at the moment. “2021 is going to be difficult for everybody. It’s all on-line and basic development training at the moment but we are hoping we are giving any lad that has the ability an opportunity on the panel. It’s important that the lads have something to keep them healthy and give them focus,” the manager says. “We have plans but the plans are dependent on the Covid- 19 restrictions but I hope we will be given the opportunity to complete some competition this year.”

Kevlihan has a holistic approach to the game at minor level. “You are a link in the chain on a development path giving as many kids as possible the opportunity to represent their county but also their other the development aspects beyond the physical training and the game,” he explains. “They are doing their Leaving Cert and everyone wants the excellent kids as they are also excellent at soccer or rugby. The onus is on all of us not to destroy these kids and to look after them in their best interest and of their families.”

“We have a loan of these players and we want them to go back to their clubs as better footballers and better people. We can only pick 30/35 players for a squad but if they are not picked it’s not the end of lives. It’s up to us to be good to them and look after them,” he repeats.

With an attitude like that it should be a very exciting year for the Kildare minors in 2021.