In this week’s Kildare Nationalist we feature an interview with Irish International Rugby player, Jenny Murphy, who has coaching connections with Naas RFC.

TWO weeks ago, on these pages we featured a review of Women’s Rugby at Naas RFC where former Irish International, Jenny Murphy, played a prominent role. This week we take a wider look at the career, on and off the pitch, of the player, coach and TV pundit. 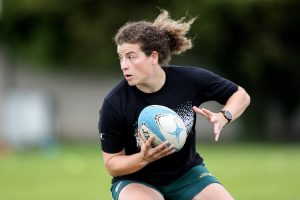 While the majority of the country are restricted to watching from their homes, Kildare native Jenny Murphy is privileged to be amongst the select few who were able to attend live sporting events in recent months.

In the second half of 2020, the Brannockstown woman was part of TG4’s match day media team for their coverage of the Guinness PRO14 on a couple of occasions. Her experiences thus far with the Irish language channel have been overwhelmingly positive and has left her longer for the day that crowds can return to sporting stadia across the country.

“It was really lovely and hopefully I get the opportunity again to go to some games in the future. It was so nice actually seeing live sport as well. I definitely didn’t take for granted being in the RDS and Thomond Park for a previous fixture,” Murphy explained.

“I’m never going to get frustrated again if I’m in a packed-out Aviva and I get half a pint of Guinness thrown over me. I will relish the day when that happens! That’s what I’m really looking forward to. Crowds and a bit of banter with the opposition fans and just playing with a few people in the crowd as well.

Murphy helped to create a little bit of history as part of TG4’s coverage for Leinster’s PRO14 encounter with Cardiff Blues at the RDS on November 22 of last year. For the first time, the station selected an all-female broadcasting team for one of their live rugby fixtures.

TG4 have flown the flag for women’s sport since they were originally launched as Teilifís na Gaeilge in 1996 and Murphy saw this as the next step in that evolution.

“The TG4 crew, they’re just such a pleasure to work with. You’re asking for feedback and they’re really encouraging. They’ve always been so supportive of the women’s game. They’re just passionate about sport and regardless of the gender playing it. I know you’d see with camogie and ladies football on TV and also the Women’s World Cup back in 2014, they were behind everything.

“I think for them they knew that there’d be a little bit of media around the fact that it was all-women, but they said themselves they didn’t want to make too big a deal of it either. There’s all-male panels all the time and they wanted to say ‘if you’re good enough for the job, regardless of gender, we’ll put you in front of the camera and we’ll give you a go’.”

Still an active player in the All-Ireland League with Old Belvedere, the 31-year-old Murphy is in her third season as part of the coaching set-up for the Naas women’s side.

Despite already having her hands full, she has also taken on the role of skills coach with the newly-formed Ireland U20s women’s team. Rather than the IRFU themselves, this squad has been made possible thanks to the cooperation of Rugby Academy Ireland.

A private academy for aspiring professionals based out of Killashee Hotel in Naas, their support has allowed Murphy – in unison with head coach Fiona Hayes and backs coach Alison Miller – to get this exciting project off the ground.

“There’s a gap there. Female rugby players in the country deserve an opportunity. We can talk about it as much as we want, but sometimes you actually just need to jump in and do it. It would be great if the IRFU came on board. The structures and the people that they have working for them, and the talent within the union, is fantastic but they don’t have an U20 women’s team yet,” Murphy said.

“So the Academy were like ‘well, they don’t have it, but we can do our best. See what happens’. Hopefully in the future there will be. You can be a bit hoarse when you’re complaining about certain things, especially when it comes to women’s sports. We just wanted to create a bit of action and do it. That’s kind of what it was.”

Whilst the current restrictions brought about by the Coronavirus pandemic means it is difficult for the coaching team to hatch long-term plans for this age grade international outfit, they did manage to hold a series of trials before Christmas.

Going by what she has seen to date, Murphy is confident a pathway can be developed into the higher ranks of women’s rugby in Ireland.

“We’ve got nearly 80 women that would fit into that U20s squad. Depending on how long this lockdown lasts, it will change a little bit. There was interest there and from across the provinces too. Some experienced girls at U18. Leinster, Ulster and the likes.

“We want the opportunity to be able to build on that and give the girls a chance going forward to represent at senior level. Whether that’s AIL, provincial or get that Ireland jersey on them. Hopefully we get a chance to do that.

“I’m not thinking too far into the future either and you don’t want to put pressure on the girls too. There’s so much unknown for them. You don’t want to give information out and it keeps changing. We’re just playing it by ear and taking it easy.”

A two-time Six Nations champion in 2013 and 2015, Murphy hasn’t featured for Ireland since the conclusion of the 2017 World Cup. While she isn’t part of the current international side’s quest to qualify for this year’s global tournament in New Zealand, the former Peamount United soccer star was set to move to the southern hemisphere nation last summer until circumstances dictated that she was to remain on these shores.

Though she hasn’t given up hope of journeying to the other side of the world, Murphy is ready to make the most of whatever life throws at her.

“It’s definitely something still on the bucket list [going to New Zealand], but that’s completely out of my control now. There’s no point in me thinking about it. If that opens up again, maybe, but wherever I happen to be I’ll make the most out of it. I’m going to be happy wherever I end up.

“If it does open up, I’d love the opportunity to get down there and play. I’m not holding out hope any time soon. I don’t think people will be getting over there this side of September anyway. I’ll focus on the bits that I can do over here,” Murphy added.