Leixlip’s Matt Goff – A Sportsman And A Gentleman

In this week’s Kildare Nationalist we feature the latest instalment of our Heroes of the Past, Leixlip’s Matt Goff, who was known as a sportsman and a gentleman.

IT must have been daunting for Matt Goff the first time he sat in a Kildare senior dressing room. It was May 1926 and Goff, just short of his 25th birthday and from junior club Leixlip was surrounded by club and county stars Larry Stanley, Jack Higgins, Mick Buckley, and Paul Doyle. 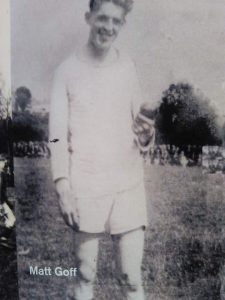 Most of that Kildare team, which would go on to win six Leinster titles in a row and reach the All-Ireland final in each of the next four years, were from the big senior clubs of the day, the likes of Naas, Round Towers, Caragh, Clane and Roseberry.

Despite apparent inducements from elsewhere, Goff stayed loyal to the club from the Dublin border and resisted any overtures, eventually leading The Lip into senior competition when they won the Intermediate title in 1929.

As a serving military policeman, he represented the army in the Dublin championship but he continued to soldier for his home club, winning a first Leader Cup title, beating Carbury in a replay in 1937 and going under to the same opposition in the final of 1940, played in November 1941. That was the 40-year old’s final game for the club, who he normally served at centre-back, with his first cousin Ned Malone operating from full-back.

Born Matthew Gough on 5 July 1901, the only son of Thomas Gough, a great supporter of Gaelic Games and Elizabeth Malone, his name was misspelled in the papers of the time and “Goff” stuck.

Had he played with a “bigger” club Goff might have played for Kildare for fifteen years but as it was, he packed a lot into his eleven campaigns in the jersey. He came to the selectors’ attention when Leixlip were narrowly beaten in the 1924 Junior Championship final by Roseberry.

As it was, he slotted comfortably into senior football. At 6’1” he was described as “tall, athletic and good looking” and went on to become the dominant full-back in the game nationally for the next few years.

Goff played corner back with Mick Buckley at full back in his first outing, a 6-7 to 1-5 drubbing of Louth but the two Kildare legends swapped positions in the lead up to the Leinster final before Goff was given the nod to don the number 3 shirt against Wexford. Kildare won that 1926 provincial final by 2-8 to 1-5.

In the All-Ireland Final of that year, Kildare defended stoutly throughout and Goff was described as the “body of the team” in front of a near 40,000 crowd, despite his lack of experience. Late on, though, Goff was finally out fielded by Kerry’s Bill Gorman and the resultant goal sent it to a replay.

Goff was among those described as “outstanding figures” in reports of the replay but goals won games in those days too and Kerry grabbed the only green flag again through Tom O’Mahoney this time, to win by 1-4 to 0-4.

The 1927 final brought the same two rivals together again. Kerry had been “cuter” than Kildare the year before but this time Kildare employed superior handling and hand-passing movements to deservedly edge out the Kingdom by 0-5 to 0-3. Goff and his fellow defenders defended stoutly throughout while at the other end Kildare forwards managed to kick 14 wides but did just enough to secure a third All-Ireland for the county.

Goff was flanked by Mick Buckley (Caragh) and Bertie Graham of Round Towers/Kildare in the 1926 final with Naas man Gus Fitzpatrick replacing Graham for the 1927 and 1928 teams. It was as solid a full back line as you’d find anywhere in Ireland.

Kildare and Kerry were due to meet in the 1928 semi-final but Tipperary shocked the Kingdom in Munster, leaving the way open for Cavan to reach the All-Ireland final against the Lilywhites. They almost shocked us too.

With Goff in his customary full-back role and Kildare unchanged from the 1927 final, five points from Paul Doyle helped Kildare struggle to a 2-6 to 2-5 win as Bill “Squires” Gannon became the first man to raise the Sam Maguire Cup.

The Short Grass men and the Kingdom met for the third final in four years in 1929, and their fifth in all, and although Kerry triumphed (the first time they’d beaten Kildare in a final without needing a replay) by 1-8 to 1-5, Goff was one of Kildare’s star performers once more and a picture of him leaping high above a Kerry forward in the Irish Independent the following day brilliantly illustrated his qualities.

The following year, Kildare were shocked by Monaghan in the semi-final but in 1931 they secured the six-in-a-row in Leinster with Goff still a mainstay of the defence, but it was a much younger team that went up against Kerry once more in the national final. Kildare got off to a flying start but were eventually overcome on a 1-8 to 0-5 scoreline.

Goff was now 30 but it would be another five years before he wrapped up his county career, and in 1935 he and Kildare were back in another final. As ever, the Leixlip man donned the number 3 shirt but Kildare found Cavan too hot to handle in front of a new record crowd of over 50,000, the Ulstermen securing their second title by 3-6 to 2-5.

Our man might have been tempted to call it a day at the age of 34 but he held on for another championship campaign in 1936, although he only made one appearance, against Meath, as Kildare lost their provincial crown to Laois in the Leinster Final. All told, he had played 65 times for the county.

Matt’s medal collection is something a modern Kildare player can only dream of. He played in six All-

Goff had joined the National Army during the War of Independence and was stationed as a military policeman at McKee barracks, with some suggestions that this was to help the Army Metro team in the Dublin championship. They reached the 1925 Dublin semi-final.

He married Mary Patricia Mulligan, who was known as Connie, in 1946 but their married life was relatively short as he passed away with bowel cancer in March 1956, at the age of just 54. His funeral was attended by players from all over the country, his coffin draped in the tricolour and his lilywhite jersey as his Leixlip teammates formed a guard of honour. A Celtic Cross was unveiled at his grave two years later.

Just how good a full back was he? Reports of matches at the time tended to focus on the scoring and very little archive footage exists, but debates raged as to whether he or Joe Barrett of Kerry were the best number 3 of the time. Eoghan Corry, who wrote Kildare’s GAA History in 1984, argues that Goff would have won five or six All Star awards and that getting past Goff was the key to beating Kildare.

There is certainly no doubt in Leixlip as to Goff’s credentials and in the early 2000’s a bridge over the Royal Canal was named in his honour.

We’ll leave it to poet PJ O’Connor to sum up one of Kildare’s greatest sporting heroes:

“A sportsman and a gentleman, On the field and off, Kildare will find it hard to field, Another Mattie Goff.”