IF Brendan Cawley had been asked by a teacher in school what he would like to be when he grew up, he probably would have answered GAA Referee! 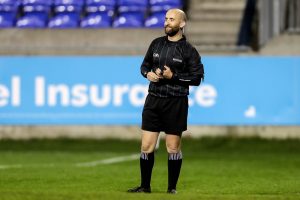 A dual player with Sarsfields, Cawley, started refereeing in 2014 when he was just 16 and now at the age of 33, he has made his way on to the National Elite Panel of GAA Referees. With such rapid progression could Kildare’s man in the middle become an All-Ireland Final Referee like fellow county men Mick Sammon, Peter Waters, Seamus Aldridge, Tommy Howard, Mick Monaghan and Ray Kelly, who has refereed an All-Ireland Camogie Final.

“My parents were a great support to me when starting off. They were bringing their teenage son out to be criticised for an hour; it was a mad pastime but it’s been very good to me, very enjoyable,” he told us this week.

“In those formative years I wasn’t the best footballer but I knew I was reasonably good at refereeing so I decided to focus on that. I enjoyed having information and knowledge and to lead and control in those scenarios. People started to acknowledge that I was good at refereeing and as I progressed through school in Newbridge and college in UL, I was able to get challenge games or schools and colleges games and underage matches in Kildare at weekends, so that kept me interested in refereeing.”

“If a referee is ambitious and enthusiastic and is acknowledged to be good then the Elite Panel is where you want to be. Now I want to break into the Top 10, refereeing big Division 1 games, Provincial Finals and progressing on from there,” he explains.

Although the appearance of a Newbridge team (or teams) in every County Football Final since 2011 has meant that the Newbridge native has missed out on a Kildare Senior Final, for now, he still has an impressive list of big games to his credit.

Preparation is key to keeping standards of excellence up according to the Newbridge whistler.

“Pa and Ross in Industrial Fitness in Newbridge tailor a programme to suit my needs and DCU’s Aidan Brady provides a running programme for Referees so I would have four or five conditioning sessions a week as well as two or three pitch runs. Because of Covid – 19 restrictions I now do those conditioning sessions in my shed at home,” Brendan informs us.

This high-volume work would taper off on game week, on the Wednesday or Thursday, depending on the day of the game, and the day before the game is a rest day.

Brendan keeps in touch with his Umpires during match week. “We agree departure times, kit to be worn etc. I also share information with them such as content and documentation from Croke Park and we have quizzes to test our knowledge on rules,” he explains.

“My parents still look after the umpire gear so it’s nice to visit them on the day before a game to collect the gear.”

Although there has been a volume of rule changes of the last number of years Cawley believes that the knowledge Referees have of existing rules as well as the structures and seminars from Croke Park upskill his colleagues quickly so it’s less of a challenge.

“Rules are logical and I’m a logical thinker; it’s how we implement the rules that defines the good referee,” the Sarsfields man says.

Hawkeye is seen by Cawley as “definitely a fantastic support and a tool to aid referees” but as this technology is not at every ground, he believes the key is for the officials to be in the best position to make their calls.

The Sarsfields man showed initiative by buying his own communication set five years ago to have consistent communication between all eight match officials so that they all have information to make best calls.

“I would definitely be a talker on pitch as I think it’s a calming thing. I have the names of every player in my notebook so that I can address each by their first name. I believe communication is key to understanding decisions and thought process on making those decisions,” he says.

The elite level referee has to make a huge number of sacrifices like missing friends’ weddings, family events and birthdays but Cawley says these are sacrifices he decided to make. He acknowledges too the sacrifices that his parents and his wife, Rebecca, make, as do the partners of his umpires who are left at home on Saturdays or Sundays with small kids.

“Rebecca is great support to me even though she is not of a GAA background which can be good as well. We got married at Christmas 2019 to ensure no GAA matches could interfere with it. She is an avid baker and has her own baking business, B-Squares, and she is my nutritionist as well,” Brendan tells us.

“I can be very challenging to live with on the week of a big game. I’m thinking ahead, visualising situations. In high performance sport you are very selfish, fully focused on the weekend and nothing is more important than the game.”

A bad day at the office can also be a challenging time for Referees with Sunday Game analysis and social media gurus to be endured.

Brendan Cawley has engaged in sports psychology over the last couple of years and he lives by New Zealand Rugby Referee, Steve Walsh’s statement, “He who controls himself controls the game.” He also likes to listen to other Rugby Referees like Nigel Owens and to material from UEFA.

“I would be my own biggest critic and would be reflective. After a game if you’ve made a decision that is contentious but you feel it was the right decision that is always easier to take but if the decision is incorrect you have to be open to criticism. You also have to be resilient, though, to be able to know what is constructive criticism and what not to engage with.”

“The mental health of Referees is also very important and it must be understood how after match actions or comments can affect them. Through social media everyone has outlet for their opinion and it’s great that people have such an interest in the game but, while constructive criticism is OK, other criticism can be hard to take. Referees are always trying to do their best,” the Newbridge man adds.

Cawley says there are many new young referees starting in Kildare are there are great opportunities with support from Declan Jacob and from Martin Whyte, who is now Chairman of the Leinster Referees. “It’s very enjoyable, keeps you involved, gives you a different insight and keeps you fit. I’d advise anyone interested in refereeing to give it a go.”

Looking forward to hopefully getting back onto the pitch soon again he is hoping to build on his own recent progress and to refereeing more Allianz League Division 1 matches and some Provincial Finals.

“I would like to continue on the journey and take the opportunities when they come and move up to the Top 10 on the Elite Panel. Obviously, the ultimate goal is to be there on the biggest day in August or September and Please God someday referee an All-Ireland Final,” the Sarsfields man concludes.