Eadestown’s Jimmy O’Brien Has Ireland Cap On His Mind

In this week’s Kildare Nationalist we carried Daire Walshe’s interview with Eadestown’s Jimmy O’Brien, who is making strides with Leinster Rugby.

THANKS to the exploits of players such as Larry Coughlan, Larry Tompkins and Emmet Bolton, Gaelic football is the sport that is readily associated with the parish of Eadestown. 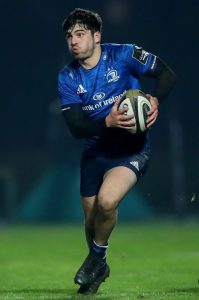 Their talents were spread far and wide, with Coughlan and Tompkins securing a brace of All-Ireland senior football championship titles in the colours of Offaly and Cork respectively.

GAA is not the exclusive sporting pastime for residents of Eadestown, however. Regarded as one of Ireland’s in-form rugby players at the moment, Tadhg Beirne hails from the village and has already represented Leinster, Scarlets and Munster in the professional game.

Rowan Osborne (Leinster) and Diarmuid Kilgallen (Connacht) are also part of the IRFU’s provincial system, the latter having made the Ireland U20s squad for last year’s Six Nations Championship. Osborne is currently joined in the eastern province by another Eadestown man in the form of Jimmy O’Brien – who recently made his 29th senior club appearance in a Guinness PRO14 clash with Munster at Thomond Park.

This game brought O’Brien face-to-face with Beirne and despite coming out on the wrong side of the result, the former Clongowes Wood College student left another lasting impression on O’Brien.

“He’s a great player. When you’re building up to Munster week, you’re talking about him and how you’re going to have to neutralise him. How you’re going to try and stop him getting turnovers. That’s his big thing and he’s so good at it. He’s been in great form,” O’Brien acknowledged.

While O’Brien and Beirne are currently making waves as professional sportsmen, they could very easily have gone down a different sporting path. Like Osborne and Kilgallen, both men previously lined out in the sky blue of Eadestown GAA.

O’Brien featured for his local club right up to the minor grade and is hopeful of one day making a return to their ranks.

“I played up until minor with Eadestown and then in sixth year, when I was playing Senior Cup, that was kind of my last year. When I was Under-17, I played minor for a full season.

“I was in and out playing with Eadestown, but once I left secondary school, I gave it up when I went into the [Leinster] sub academy. I loved it. When I stop playing rugby, I’m definitely going to go back and play for Eadestown.”

O’Brien’s impressive performances at inside centre during Newbridge College’s march to the Leinster Schools Senior Cup semi-final in 2015 captured the attention of not just the provincial coaches, but the international ones as well. After making the cut for the U20 Six Nations Championship in 2016, O’Brien was also part of an Irish group that travelled to England for the World Rugby Under 20 Championship in summer of the same year.

Under the guidance of Nigel Carolan, this side reached the final of the tournament – recording an historic victory over New Zealand along the way. The strength of the Ireland squad at this time was reflected in the fact that O’Brien had to be content with a spot on the bench for all bar one of the five games they played in the host city of Manchester.

From that squad, Jacob Stockdale, Hugo Keenan, Shane Daly, James Ryan, Andrew Porter and Max Deegan – as well as Jimmy’s current housemate and fellow Kildare man Will Connors, who missed on the tournament through injury – have gone on to achieve full senior status with Ireland.

“I think there was one game in November where, of the starting 15, five of them were from our Under-20s team. Shane Daly and Conor O’Brien, they were in the centre for the World Cup and I was [number] 23,” the Naas RFC club man said.

“That was probably the start of me being able to cover a good few positions. I had only really played 10 and 12, and kind of 13, up until then and once I went to 23, they were like ‘you’re going to have to cover other ones’.”

Following 19 starts as either a full-back or an outside centre, O’Brien was named on the left-wing for Leinster’s aforementioned showdown with arch rivals Munster on January 23. Having only enjoyed fleeting moments in this position beforehand, O’Brien admits it was a tough transition – especially on a night when forwards prospered and backs were forced to live off scraps.

“I’d never started on the wing for Leinster, but I had to play both right and left wing off the bench. The conditions made it quite tough to move the ball. I was standing out on the wing and didn’t get the ball, but I was trying to work in and look for work.

“It was quite a tough game. A lot of hard yards done by the forwards. It kind of just comes like that. There are not many opportunities in those high-level games. You have to take the ones that come to you.”

While Leinster claimed the spoils with three points to spare (13-10), O’Brien’s night ended in frustration. A hamstring injury led to his withdrawal on 59 minutes and he was forced to sit out the following week’s thrilling away triumph over Scarlets.

It isn’t expected to keep him out of action for too long and with Leinster set to embark on a hectic schedule of five PRO14 games in as many weeks, he will be looking to continue doing what he loves in these uncertain times.

“Hopefully there’ll be a lot of opportunities. I’m kind of hoping that, because I’m able to play loads of positions, that I’ll get picked. I haven’t a clue! We’re obviously extremely lucky. I’ve been texting my mates and I’d be complaining that I’m bored, but I’m still able to go in and train, and play matches.

“I’m basically doing my job, whereas they’re all just sitting at home and being bored. You have to keep reminding yourself, I can’t be complaining. I have it a lot better than most people. I’m delighted we’re still able to train and play.”

In addition to featuring prominently at U20 level, O’Brien has also represented his country in the Sevens code. He was part of the Ireland squad that won the Challenge Trophy at the Sevens World Cup in 2018, alongside his former U20s colleagues Keenan and Daly.

Since devoting themselves solely to the most common form of rugby, the latter duo have made steady progress and are currently part of Andy Farrell’s plans for the Six Nations Championship. Having already reaped the benefit of regular exposure to Sevens rugby, O’Brien’s aim is to eventually follow in their footsteps and earn an international 15’s cap.

“It benefited my confidence, just taking on lads one-on-one with my speed and then you’re one-on-one tackling, passing and everything. You just get the ball way more and you’re playing it a lot more. It definitely helps,” O’Brien added.

“That’s the goal I’d say for 99 per cent of the lads playing professional rugby in Ireland or coming up through the ranks. You always want to play for Ireland. It’s definitely one of my goals. I’ve just got to concentrate on my own game now in Leinster and hopefully get picked, but it’s obviously so competitive.”

The Bagnalls – A Family Steeped in Club Rugby Tradition