Newbridge native, Jordan Duggan, who will feature in next week’s Kildare Nationalist, will make his first start for Connacht Rugby in Saturday’s PRO 14 clash with Cardiff Blues at the Sportsground KO 7.35pm, live on TG4. Duggan’s previous seven appearances for the province were off the bench. 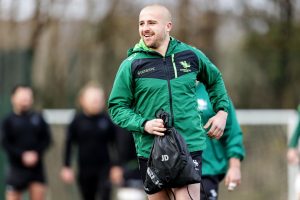 Bundee Aki, Ultan Dillane and Dave Heffernan are all included in the team by Head Coach, Andy Friend..

Jarrad Butler returns to captain the side from openside flanker, with Eoghan Masterson and Paul Boyle forming the rest of the back row. Dillane is partnered by Gavin Thornbury in the second row, while Heffernan is joined by props  Duggan and Finlay Bealham to complete the pack.

Duggan will make his first start for the province with his seven previous appearances coming off the bench.

Caolin Blade and Jack Carty start at 9 and 10 respectively, while Aki forms an exciting centre partnership with Tom Daly. John Porch continues his run of starting every game this season, forming a back three with wingers Matt Healy and Alex Wootton.

In Kildare Nationalist Sport This Week….