Siobhan O’Sullivan A Leader In Life And In Sport

In this week’s Kildare Nationalist Sport we carry a feature on Kildare LGFA player, Siobhan O’Sullivan. 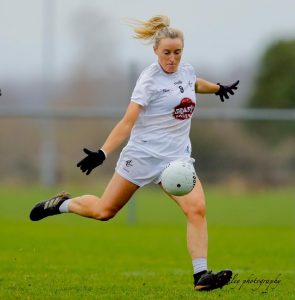 A Commandant in the Defence Forces, the Sligo native, who moved to Kildare in 2013, expressed her delighted with the award. “It is targeted at people who are employed and who are working in middle or senior management. The Diploma in Strategic Human Resource Management will be of great benefit to me in my work place as a lot of what I do at work has a large human resource management element so it’s very relevant to what I’m doing in the Defence Forces,” Siobhan said.

O’Sullivan joined the Defence Forces in 2004 as a Cadet and trained in Military College in The Curragh where she was commissioned in 2006 and she has been working her way up through the ranks since.

On the matter of females in the Defence Forces, Comdt O’Sullivan says, “we are treated fairly and equally with our male counterparts but we still have the problem of trying to recruit female recruits. One of the objectives of the organisation is to try and increase female participation rates. It’s at 6% at moment and the target is to bring that up to 12% but despite lots of initiatives and recruitment campaigns it’s been a challenge.”

Siobhan doesn’t see any reason why there can’t be a female Chief of Staff of the Defence Forces in the future. “We have a good cohort of females at the moment that are working their way up through the ranks. There may be some difficulties for females with families in terms of deployment overseas but we are undertaking a survey at the moment looking at impediments to career advancement for females so it will be interesting to see what comes out of that.”

O’Sullivan had overseas assignments herself in the Lebanon in 2012 and the DR Congo in 2017 which impacted on her ladies football playing career.

“I played for Sligo from 2003 to 2014 but when I moved to Kildare for work in 2013, I found it quite physically and mentally demanding travelling up and down to Sligo for training and games. I didn’t play for three years (2015/16/17) and I was quite happy to take a break from intercounty football and I more or less hung up my boots. In 2018 while overseas in Congo I began to have a different outlook on life. I had a lot of me time so I started to wonder if I still would be able to contribute at intercounty level at 31 years,” the Eadestown stalwart explains.

She transferred to Kildare in 2018.

O’Sullivan is very positive for 2021. “The 2020 season as a whole demonstrated to us that we had matured an awful lot and we were showing a level of consistency and winning games. We believe we have unfinished business and are motivated and ambitious to do well in 2021,” she says.

“We have great support from our Management Team and S&C Coach who has given us various programmes to work on. We want to be in the best shape we possibly can when we get back playing so we are happy to train hard by ourselves and look forward to getting back when ever that happens,” she adds.

O’Sullivan is particularly interested in fitness herself with a Primary Degree in PE Teaching and a Masters in Sports Performance and she spent three years in the Defence Forces Physical Education School. “I have worked with Manager, Liam McLoughlin on S&C with Eadestown senior team for the past three years and I’ve coached the club’s ladies minor team so I would definitely have ambitions to coach or manage at club or county level, when I hang up my boots, which may be soon,” she laughs.

“I am listed for deployment to Kosova in October so that might be a natural end to my footballing career as I will be away for six months but before then I hope I get an opportunity to win an Intermediate All Ireland Final with Kildare and I hope also for a safe mission overseas in Kosovo, Comdt O’Sullivan concludes.

Somehow, we think that if three years out of intercounty action didn’t diminish them then six months in Kosova are hardly unlikely to put a dent on her intercounty ambitions.

We wish her well in her sport and her career.

Róisín Byrne Named On LGFA/TG4 Intermediate Team Of The Year

MJ Smith Hoping To Repeat The Successes Of 2016