We continued our Heroes of the Past in this week’s Kildare Nationalist as Richard Commins looked at the life and times of Kildare and Kilcock’s James “Ginger” Moran.

THIS week’s Heroes of the Past owes much to the research and assistance of Dr Ciarán Reilly, author and historian based at Maynooth University who specialises in nineteenth and twentieth century Irish history and has written and presented on the life of James “Ginger” Moran. 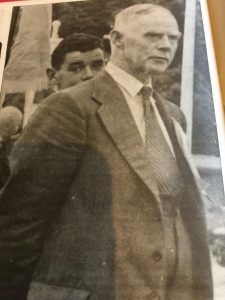 It might seem strange to feature a man who played only nineteen competitive games for the county in this series but James “Ginger” Moran was no ordinary man on or off the field.

Ginger, so named for his flame-red hair, made light of a diminutive frame of 5 feet 6 inches to command the full-back position at county level, from where he was instrumental in Kildare’s second All-Ireland success in 1919. He was also a leading player for a fine Kilcock team which won two county finals and appeared in two more between 1914 and 1919.

Soon after the All-Ireland triumph, Moran’s attentions turned to more serious matters of the day, namely the War of Independence, and having moved to Edenderry, Co. Offaly, where he set up a bicycle repair and car hire business, he helped to revitalise a flagging Volunteer battalion in the town, playing an important role as an IRA leader and later, as Chairman of the local Old IRA, to heal many of the wounds from the Civil War.

James was born in Trim, Co. Meath, the son of Thomas Moran and Christina Wilton, on 3 April 1889, the family moving to Kilcock two years later. James was a prize-winning athlete and won the half mile cycling race at Kilcock sports on a number of occasions. But when the great Tommy Kelly, from the 1905 All-Ireland winning team, came to the local Bawnogues school to promote football, Moran was hooked.

Kelly used his connections to bring players from all over to play for Kilcock O’Connell’s, later known as Kilcock United Gaels, stars such as Naas-based Joe Rafferty, the former captain of both Clane and Roseberry, who also numbered Sallins and Kilcullen among his clubs, George Magan (pronounced McGann), one of the few protestants to play the game in those times and Albert O’Neill, both from Celbridge, Joe Connor from Timahoe, the Bourkes from Carbury and various Naas players such as Christy “Lagger” Higgins.

Legend has it that Moran’s dedication brought him back on a weekly basis from Kiltegan, Co. Wicklow, where he worked on the McHugh demesne. That was a 40-mile cycle and he was reputed to have had dinner on a Saturday lunchtime, cycle to Kilcock, match on Sunday, followed by tea and then a cycle back via the dancehall at Poulaphouca falls!

When interviewed later in life, Ginger remembered Kelly as the brains behind the Kilcock team. He introduced unusual training techniques, such as shadow boxing for speed, and dirty play was frowned upon. Kelly improved Kilcock gradually.

In 1905 they’d almost beaten Roseberry in the semi-final, only to be clawed back late on, losing the replay, but Kelly built further and the sides drew again in the 1912 semi-final, played in April 1913. They replay was on the first day of 15-a-side rules a month later, Roseberry winning thanks to a disputed goal.

Moran remembered a great rivalry with neighbours Maynooth in those days and the two met in the 1913 final (played in February 1914) with Kilcock losing out by 2-1 to 1-1 in Clane. Ginger was now 24. His father was active in the United Irish League (UIL) and Ginger became involved in the Irish Volunteer movement.

Ginger moved to Edenderry to open his business but he remained loyal to the Kilcock cause and on 30 May 1915 the “United Gaels” secured their first SFC title with a 1-4 to 0-4 win over a star-studded Clane outfit in Celbridge in what was described as one of the “most hotly contested for many years.”

Kelly, still a player, scored two of the points and “Kit” Flynn, Kilcock’s star attacker scored the crucial goal, while Ginger lined up at wing forward.

One amusing story re-told from that game involves Rafferty, dubbed a “medal-hunter” having moved from Clane to Roseberry to Kilcock, and Clane goalkeeper Larry “Hussey” Cribbin. When a ball was sent in towards the Clane goal, Rafferty shouted “punch it” to his forwards. “Come in here yourself Joe and punch it” retorted the robust Cribbin.

Tragedy struck the family that year. His brothers Jack and Edward had answered the call of John Redmond to enlist in the British War effort and were sent to fight in France. Sadly, Edward died from ‘asphyxiating gas’ having been wounded near Pas de Calais. Jack was reported missing at the same time but was later found suffering from extensive wounds.

At home, Ginger made his competitive debut with Kildare scoring a goal from wing-forward against Louth in 1916. The Short Grass men surprised a fancied Louth outfit with a 3-3 to 1-4 win on the way to a Leinster Final with Wexford. Moran held his place for that encounter which Kildare lost by 1-0 to 1-7, the evergreen Kelly scoring the goal.

Kilcock went three years without appearing in the county final but they made it a successful return, winning the 1917 championship in January 1918 against Kilcullen on a frosty Sunday in Naas. They became the first (and so far, the last) team to win the final without scoring a point, not that The Rags did much better. It ended 5-0 to 2-1.

That summer, Kildare selectors switched Moran to full-back for the Leinster Championship opener with Laois but the campaign ended with a dismal 0-1 to 0-7 reverse to Louth in the semi-final. Kildare were missing six players due to the influenza epidemic including Larry Stanley and Mick Buckley, however, and 1919 would see them return to provincial and national glory with Moran starring at number 3.

Kildare beat Laois in the first round again and in Moran’s new hometown of Edenderry, Westmeath were hammered 4-3 to 1-5 with Twomilehouse man Jim O’Connor becoming the first man to score four goals in one game for Kildare.

Dublin had ousted Wexford and were favourites for the final played in front of 20,000 in Croke Park, but Larry Stanley nullified Paddy McDonnell, Dublin’s key player, and Kildare secured a 1-3 to 1-2 victory after a particularly tense second half in which the Metropolitans landed the only point of the second half. Moran was outstanding in a dogged Kildare defensive display.

A week later, two first-half goals in Navan saw Kildare comfortably ahead of Cavan at half-time in the All-Ireland semi-final but the Lilywhites eased off in the second half before winning 3-2 to 1-2.

Galway came into the All-Ireland final on the back of an impressive replay defeat of Kerry, while Larry Stanley, the Kildare captain, had to write to the local papers to implore some of his colleagues to turn up to training under Joe McDonald, specifically calling out Maddenstown and Newbridge players.

Michael “Knacker” Walsh was the star of the Galway attack but Ginger was credited with nullifying him, with Larry “Hussey” Cribbin also playing a crucial role. Cribbin took on the role of challenging Walsh for the high ball at times while Moran slipped back into goal. Kildare famously won by 2-5 to 0-1 to take their second All-Ireland.

By this time Moran was leading the IRA company at Edenderry, a group whose activities were described by local magistrate William J.H. Tyrrell, known locally as “Billy the Devil”, as “raiding homes, firing warning shots…and blowing up bridges, effectively making the countryside ungovernable.”

Ginger still found time to play for Kilcock in another county final a couple of months after the All- Ireland final but they lost out to Mick Buckley’s Caragh in what was to be their last final until 1940. Newspaper reports claimed that despite being on the losing side it had been the “Moran County Final”.

Moran lined out in the 1920 championship when Kildare lost their title to Dublin in the final but the following year “other matters” took precedence. Shortly after Bloody Sunday, Moran led an attack on the barracks in Edenderry, wounding two Black &amp; Tans, while receiving a bullet wound to the neck himself.

Ginger was forced to go on the run more than once and in March 1921 was lucky to avoid arrest when four of his unit were captured near Walsh Island. They mounted further attacks that year, including one on the day the Anglo-Irish truce came into effect in July.

The following month, he was back in Kildare colours for the 1921 Leinster Final, which was against Dublin once more. The Short Grass lost out again in a replay.

In 1922 he was persuaded by the famous Loughlin brothers to play football with Rathangan and won a Leader Cup medal with them. He only played once more for Kildare, at the age of 34, a loss to Kilkenny in April 1923.

Married to Jenny (Jane) Davey in 1928, Moran remained involved in gaelic games and became a referee in Offaly. His son Liam represented Offaly at senior level while in 1955 Moran saw a Kilcock team including his nephew Noel win the first of three Kildare SFC titles in four years. Noel represented Kildare seniors also.

Ginger incredibly lived until 1987, by which time he was 98. He and Stanley were the only survivors of the 1919 team by then, although Stanley was seven years younger. Indeed, Moran outlived all of the 1927 and 1928 All-Ireland winning teams. In 1978 he was honoured to be awarded a Kildare GAA Hall of Fame Award.